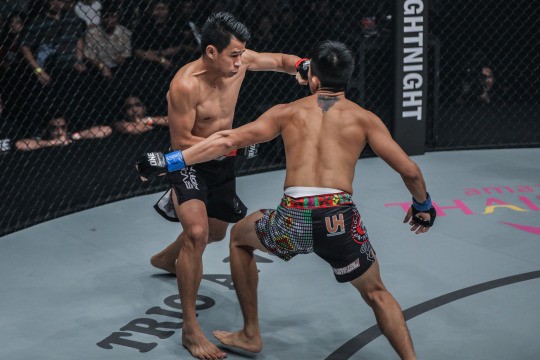 Decorated Muay Thai Champion Sagetdao Petpayathai has officially made a successful transition into the MMA world.

The man known as “Deadly Star” returned to the Impact Arena in his old stomping grounds of Bangkok, Thailand, on Saturday Night, 11 March, and won his first mixed martial arts about with relative ease.

He stopped Malaysia’s Kelvin “Ice Man” Ong in the first round of their featherweight bout at ONE: WARRIOR KINGDOM.

Ong, who trains out of Borneo Tribal Squad, fearlessly came forward, but was clipped by Petpayathai’s left hand only 25 seconds into the contest. The Thai then unleashed a kick to his opponent’s body, pummelled him with another left, defended a takedown, and whipped another body kick home. Looking to avoid more punishment, the “Ice Man” tied his opponent against the cage and tried to catch his breath. Petpayathai, however, remained busy with his back against the fence, as he delivered some sharp elbows and thunderous knees. Ong was sent reeling backwards, and “Deadly Star” followed up with a barrage of left hands.

Referee Yuii Shimada felt the Malaysian had had enough, and waived the fight off at the 2:20 mark of the first round, giving Petpayathai the TKO in his MMA debut. “I am so proud to be here to show Muay Thai to all thai fans here. My goal is to be the champion, the world champion of ONE Championship,” the Thai said in the center of the cage.

Petpayathai, who trains out of Evolve MMA, is officially 1-0 in his MMA career. As for Ong, he drops to 1-1.