In this screenshot, the scammer impersonating Fernandes on Facebook is asking for a membership fee to be paid in order to join the fake foundation.

A user on Facebook is impersonating AirAsia Group chief executive officer Tan Sri Tony Fernandes to scam the public, according to a statement by the airline.

"AirAsia would like to bring the public's attention to a scam on Facebook which has been using the name Tony Fernandes and citing a Tony Fernandes Foundation offering opportunities to assist in projects in exchange for membership of the fictitious foundation," the company said.

The scammer has set up a Facebook page with the name Tony-Fernandes, which has over 2,200 followers.

Many news reports on Fernandes have been shared on the page, mostly likely so the scammer can reach out to those who comment.

In a screenshot shared by AirAsia, the scammer sent a message to a user, claiming that he can offer assistance as long as the user becomes a member of the fake "Tony Fernandes Foundation".

To become a member, the user must fill up a form with details like name, email and date of birth.

Once a user sends the filled up form, a person claiming to be Fernandes' personal assistant will ask for a "membership fee" to be paid. 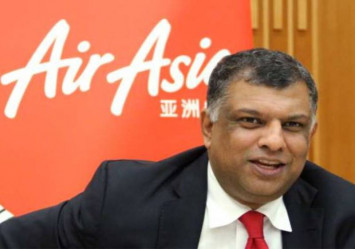 AirAsia said its only official foundation is the AirAsia Foundation and that it has reported the scammer's page to Facebook.

AirAsia said it will never request for personal details without specific or lawful measures. It will also take legal action against individuals or groups using the AirAsia brand to commit fraud or identity theft.

"Members of the public are advised that AirAsia shall not be held liable for any claims arising from schemes in which it and any of its authorised officers/employees have no involvement," it said.