Alibaba has announced a series of initiatives focusing on sustainability and inclusiveness for this year's Singles' Day shopping festival.

The company said its Tmall marketplace is issuing 100 million yuan (S$21 million) worth of “green vouchers” to encourage purchasing decisions that “contribute to an environmentally friendly lifestyle”, while its logistics arm Cainiao Network will introduce recycling of packaging materials across 10,000 distribution stations in 20 cities beginning Nov 1.

The company also said it will enable sellers to donate a portion of their sales to efforts supporting senior citizens living alone, “left-behind children” in rural areas, as well as low-income workers, and make a 1 yuan donation for every social media share mentioning its “Goods for Good” purchases.

Alibaba, owner of the South China Morning Post, has long used Singles’ Day to showcase its sales and marketing prowess.

For years, the company organised elaborate countdown galas in the hours leading up to the start of its shopping extravaganza, and broadcast its eye-popping sales figures on a giant screen at the end of the marathon event.

This year, in contrast, the Hangzhou-based tech conglomerate has highlighted a slew of initiatives that are in line with Beijing’s increasing focus on environmental sustainability and social equality.

Last year, President Xi Jinping announced for the first time that China is aiming to achieve carbon neutrality before 2060.

In April this year, the Chinese government asked businesses to redesign their websites and apps to cater to the country’s ageing population.

Xi has also repeatedly emphasised the need for China to promote common prosperity, urging high-income businesses and individuals to give back to society. 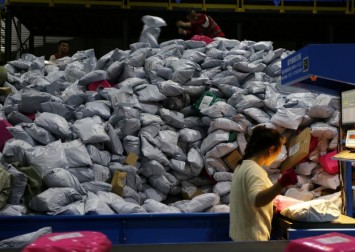 “This year’s festival marks a new chapter for 11.11,” said Chris Tung, chief marketing officer of Alibaba. “We believe we must leverage the power of 11.11 to encourage sustainable development and promote inclusiveness to consumers, merchants and partners across our ecosystem.”

Alibaba’s new campaign marks the latest in a series of gestures that the company has made in response to Beijing’s policy focus, after the government in April slapped a record fine of US$2.8 billion (S$3.76 billion) on the Hong Kong and New York-listed firm for monopolistic practices.

Authorities have also launched an antitrust investigation into delivery giant Meituan, a cybersecurity probe into ride-hailing giant Didi, and ordered the video gaming industry to curb game time for minors.

Alibaba said last month it would set aside 100 billion yuan towards promoting “common prosperity” in China, making the biggest single corporate pledge in response to a government call to narrow the nation’s wealth gap.

Earlier this year, Alibaba, together with its online payment affiliate Ant Group, pledged donations of 200 million and 50 million yuan to the flood-stricken provinces of Henan and Shanxi.

Same as last year, Alibaba said its coming Singles’ Day shopping festival will feature two sales windows – one from Nov 1 to 3 and another on Nov 11 – with a record 290,000 brands taking part in the event.

Rival JD.com kicked off its Singles’ Day event on Sunday, during which the Beijing-based e-commerce giant expects to sell over 30 billion yuan worth of farm products.