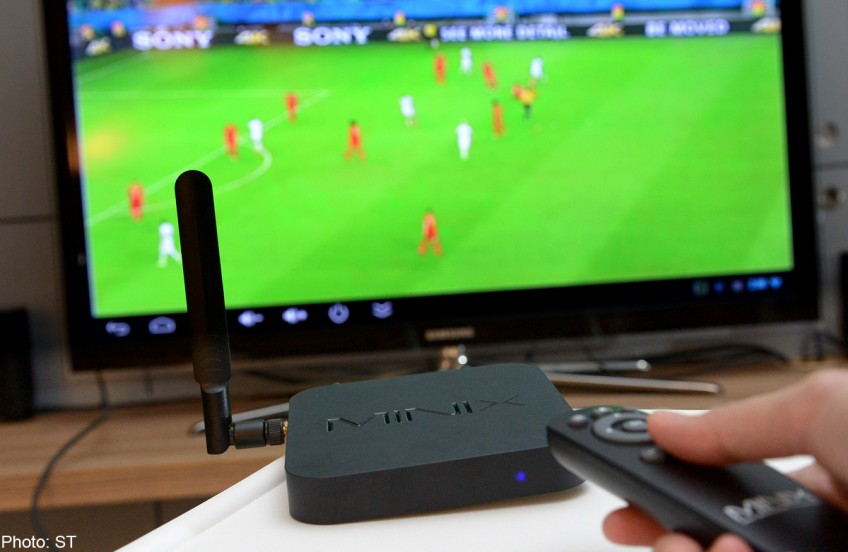 The Internet set-top boxes are essentially tiny computers running on the Android operating system and are pre-loaded with apps, such as PPTV and Funshion, which stream movies and TV shows for free.

SINGAPORE - Pay TV operators SingTel and StarHub, along with content owners such as Fox and TVB, are crying foul over the rise of cheap Internet boxes which allow users to get premium, high-definition programmes from as low as $6 a month.

But it is unclear if people who buy these Android set-top boxes and subscribe to streaming services are breaking the the law.

On a recent visit to Sim Lim Square, The Sunday Times found more than 10 shops selling these boxes openly. Shopkeepers said sales have gone up from three boxes a day two years ago to more than 10 boxes daily, thanks to sleeker designs and greater consumer awareness.

During the recent football World Cup, some shops sold as many as 18 boxes a day.

A shopkeeper on the third level who wanted to be known only as Louise said: "People have no problems with the services. They can watch all the channels they want. Others who see it want it too."

These boxes, which cost between $120 and $250, are essentially tiny computers running on the Android operating system used in popular smartphones and tablets. They are pre-loaded with apps, such as PPTV and Funshion, which stream movies and TV shows for free.

New apps from China such as CloudTV have also emerged to offer free and premium content.

CloudTV's "English channels" pack for instance offers unlimited viewing of more than 50 channels, including HBO, English Premier League, Discovery and CNN, for US$4.99 (S$6.20) to US$6.99 each month.

Shopkeepers said sales of these boxes are not in breach of any regulation here. One of them, Jason, who declined to give his full name, said: "I've been selling them for about two years. Would I still be here if they were illegal?"

Louise added: "It is not illegal to use Android here."

But pay TV providers, who charge $12.90 to $69.90 for their packages, and content-rights owners call the streaming services "piracy" and warn consumers that those who use them may be infringing copyright.

A StarHub spokesman said: "Sale of boxes which facilitate unauthorised access to content amounts to theft. End users also suffer inconsistency in quality of service and may experience termination of access when the pirate host sites are shut down."

A SingTel spokesman said: "Using apps to access content without the proper IP (intellectural property) rights is illegal and users can be subject to copyright suits."

Lawyers here say that buying the boxes is likely to be okay, but subscribing to pirated content may not be.

The Ministry of Law said rights owners may take civil action for copyright infringement against users who had been found to access or download programmes for viewing without authorisation.

The grey area is whether such consumers are criminally liable.

Mr Bryan Tan, a partner at Pinsent Masons MPillay, said: "Broadcasting illegal content is an offence but it is still unclear if receiving streaming content is."

Mr Loh CS, a 26-year-old computer engineer who bought a $149 box for his family at an IT show last year, said: "When I bought mine, I definitely got the sense that it was not legal. But it felt like it was too good a deal to pass up."