Two popular youth-focused expos are returning to Hong Kong, with organisers scrambling to attract crowds of gamers and anime aficionados - despite the threat of more extradition bill protests.

The third Esports and Music Festival and 21st Ani-Com Hong Kong kick off on Friday at the Hong Kong Convention and Exhibition Centre in Wan Chai. The esports event runs until Sunday, with the Ani-Com - short for animation-comic-game - ending on Tuesday.

Mason Hung Chung-hing, a Hong Kong Tourism Board official who helped organise the events, said attendance was not a big concern.

"Our expectations for this year are slightly more conservative, but we are not yet worried about the turnout," Hung said. "Even though I've heard tour groups are cancelling trips, our target group is youth who generally plan their own trips."

He continued: "Since visitors only need one ticket to attend both the esports event and the Ani-Com, we expect the turnout for the two events to be roughly the same as last year at about 80,000."

"Our expectations for this year are slightly more conservative, but we are not yet worried about the turnout"

The exhibition centre was along the route of several of the protest marches held in Hong Kong since June. Millions have taken to the streets to protest against the government's extradition bill, which would have allowed the transfer of criminals to jurisdictions where Hong Kong does not have extradition agreements, including mainland China.

The annual Hong Kong Book Fair, which ended on Tuesday in the convention centre, had lower attendance over its final weekend because roads were closed for protests. Exhibitors at the book fair said people left early over fears of violence in the New Territories after a mob attacked passengers at Yuen Long MTR station.

There are at least two protest rallies expected this weekend: one on Saturday in Yuen Long to protest what protesters see as lack of support from police during last weekend's attacks, and a march on Sunday to demand the government investigate what protesters called the use of excessive force by police in earlier protests.

Some organisers said the event was supported by a stable audience base and would not be affected by protests.

"After all, comic fans have their own interests and the exhibitors release different products and deals every year," said Felix Poon Kam-chuen, a spokesman In Express Expo.

Hung also said organisers were not worried about protesters at the event, adding that people rights and opinions would be respected as long as they did not disturb the proceedings.

This year a combined ticket is available for HK$50 (S$8.75) that allows entry to both the conventions.

But Sony Interactive Entertainment, an Ani-Com exhibitor, said it was concerned about low turnouts and would offer discounts on its PlayStation line of game consoles. 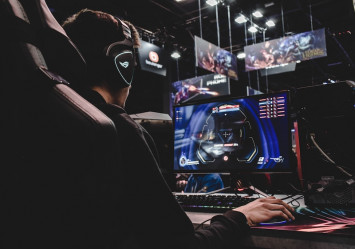 "It is the right timing for these offers because the products have been released for a while now - and because of the protests, I think every expo will likely be affected," said Jacqueline Chiu Sin-ying, Sony's general manager.

At the esports convention, top college gaming teams from China, Brazil and South Korea, among others, will compete in the 2019 League of Legends International College Cup.

The finals for the Counter-Strike Go World Invitational and Player Unknown Battlegrounds Mobile Hong Kong Tournament will also be held during the convention.

Drone racing is also an option, with coaches on hand from the Hong Kong Drone Sports Association.

"These are different from the usual camera drones, and can reach speeds up to 100km/h if the arena is big enough," said Albert To Chi-Ho, a coach with the local association.

A new "retro fighting game zone" will feature arcade classics such as Street Fighter and King of Fighters. Other attractions include lucky draws and a mobile gaming zone.