People wearing protective masks outside an Apple Store in Shanghai, China, on February 21, 2020.

Tmall, the online marketplace operated by e-commerce giant Alibaba Group, is offering discounts of up to 20 per cent on a range of Apple products, including the new iPhone 11, according to information posted on the store.

Li Jiaqi, one of China’s most famous live streaming salesmen, was recruited to help promote the sale.

“Here it comes! … It’s the first time Apple’s Tmall official flagship store joins the live-streaming platform,” Li said during a live streaming session on May 28, ahead of the so-called 618 annual spending festival that kicked off on Monday.

Separately, sales of Apple products on rival e-commerce platform JD.com, which initiated the 618 midyear shopping campaign 17 years ago, amounted to 1.5 billion yuan on the first day of the promotion, JD said.

Apple declined to comment on its sales performance in China. 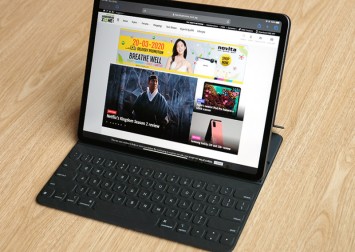 Other smartphone brands including Huawei, Oppo, Xiaomi and Vivo are offering discounts for new models sold on their Tmall flagship stores, along with interest free installment plans.

Many retailers, unable to open their brick and mortar stores during the pandemic lockdowns, have pinned their hopes on the 618 shopping festival to revive business.

Apple’s live-streaming debut came after the smartphone industry saw sales slump after the outbreak of the pandemic.

Data from research firm Gartner showed that global sales of smartphones declined 20.2 per cent year on year in the first quarter of 2020.

Apple’s iPhone sales declined 8.2 per cent year on year to 41 million units in the first quarter.

“Most of the leading Chinese manufacturers and Apple were severely impacted by the temporary closures of their factories in China and reduced consumer spending due to the global [stay-at-home orders].”

ALSO READ: Here are the likely prices and storage capacity options for the iPhone 12 lineup

Huawei recorded the worst performance among the top five global smartphone vendors in the first quarter of the year, with its shipments falling 27.3 per cent year on year to to 42.5 million units.

Still, it was able to hold onto the No. 2 position globally with a 14.2 per cent market share behind Samsung Electronics whose first quarter sales fell 23 per cent for an 18.5 per cent share.