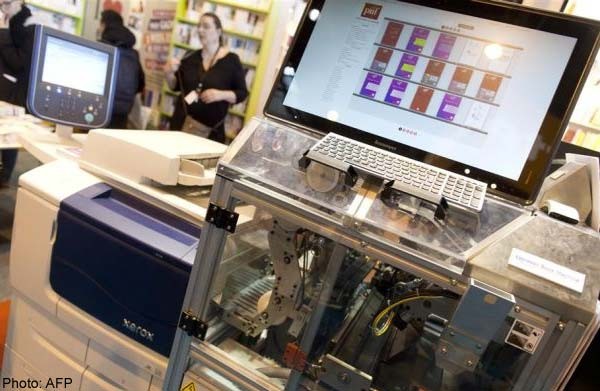 A book printer on display at the "Salon du Livre" International Book Fair held in Paris.

PARIS - Chose a PDF file on the screen and five minutes later a book, printed and bound with a proper cover, spits out.

It used to be science fiction, but machines that do this are here now and increasingly grabbing the attention of publishers and the public.

Two such machines proved big attractions at the Paris Book Fair over the weekend, with French publishing companies PUF (the University Presses of France) and La Martiniere showing how easy it can be to print books on site without cumbersome transport and distribution worries.

"It's a big opportunity for everyone," said PUF chief executive Frederic Meriot, whose company was displaying the Espresso Book Machine made by US group Xerox and running a French bit of software, Ireneo.

La Martiniere showed a smaller rival apparatus made by Japan's Ricoh, and operated by a French firm called Orsery.

Such machines have been around for a while. Xerox's, for instance, came out a decade ago.

So why haven't they yet revolutionised the industry?

Part of the reason is the high cost of each unit - around 80,000 euros (S$11,950). Another is the size: as big as two book display tables in a store - a prohibitive space-stealer for small book outlets.

But the French companies promoting them have faith in the inexorable march towards smaller and cheaper technology that will soon make such devices an obvious boon for booksellers.

In the meantime, vendors of the printed word can rent a Ricoh book-maker for 250 euros a month, said Osery head Christian Vie.

In doing so, "they will pocket 33 per cent of the cover price of a book," a margin slightly higher than through traditionally printed-and-delivered books, Vie said.

PUF, meanwhile, believes an interim solution could see booksellers within a network sharing an Espresso Book Machine, avoiding hosting the unit on their premises but still allowing them to have books delivered within hours.

The advantage would be to provide customers with little-bought books without the need to physically stock them - a service increasingly in demand in the changing marketplace.

"Today, a customer who doesn't find a book in a bookstore goes to Amazon," Vie said. "This machine lets book stores hold on to those clients."