Facebook was one of the first internet software companies to go into VR.

ByteDance, the Beijing-based maker of short video platform TikTok, has made another move towards creating its own metaverse with the acquisition of virtual reality (VR) start-up Pico Interactive.

The company said that Pico Interactive’s software and hardware, as well as its talent and expertise, will support ByteDance’s “entry to the VR space and long-term investment in this emerging field”.

“We are optimistic about the future of VR and its alignment with our mission,” said a ByteDance spokeswoman.

In April 2021, ByteDance invested around 100 million yuan into Mycodeview, the company behind Reworld, an up-and-coming competitor to metaverse incumbent Roblox.

Pico Interactive will continue to focus on the Chinese consumer market while retaining most of its staff, according to sources familiar with the matter. ByteDance, however, has not yet made concrete plans for its VR products, they said.

The deal – estimated by the sources to be worth close to five billion yuan (S$1.04 billion) – follows forays from internet firms such as Facebook, Apple, and Huawei Technologies Co.

“The investment and support of internet companies are beneficial for the VR industry because of their contents and new technologies,” said IDC analyst Claire Zhao, noting that the partnerships help build VR ecosystems. 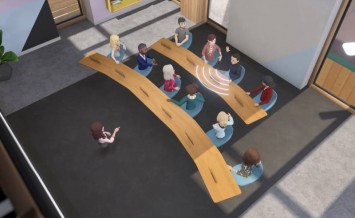 Facebook was one of the first big names entering the VR field by purchasing virtual reality gaming company Oculus in 2014.

Huawei introduced its VR Glass in 2019, while Apple confirmed it was acquiring virtual reality start-up NextVR in May 2020.

Facebook’s foray into VR has more recently expanded into the metaverse, a tech buzzword signifying the next phase of the internet where our physical world combines with the virtual.

The company’s founder and CEO Mark Zuckerberg said in June it will dedicate a team to its new vision while showing its virtual office space Horizon Workrooms this month by using the company’s headset Oculus Quest 2.

Pico Interactive, founded in 2015 by Henry Zhou Hongwei, employs 300 people and has offices in China, the US, Spain, South Korea and Japan.

Zhou, who previously worked at Chinese acoustic components company Goertek, said then that the company will continue to invest in VR gaming and other consumer applications as it explores enterprise products.

The Beijing-based company is also planning to launch a new VR headset later this year called the Neo 3.

With sales growing 44.7 per cent in the first quarter of 2021, Pico Interactive ranked third in the VR headset market, following Facebook and Chinese company DPVR, with HTC and Sony rounding out the list, IDC said in a June report.

Global sales of VR headsets are expected to rise to US$28.6 million in 2025, according to the same report.

ALSO READ: Facebook sets up new team to work on the 'metaverse'