Chinese carpenter Wang Dewen is, by any measure, a true internet celebrity.

His woodworking videos – showing him building everything from furniture to bridges and lanterns using traditional methods – have become on online sensation, earning him more than 2.8 million fans on the Chinese short video app Xigua Video.

His fame has translated internationally too, garnering over 1.2 million subscribers on YouTube. 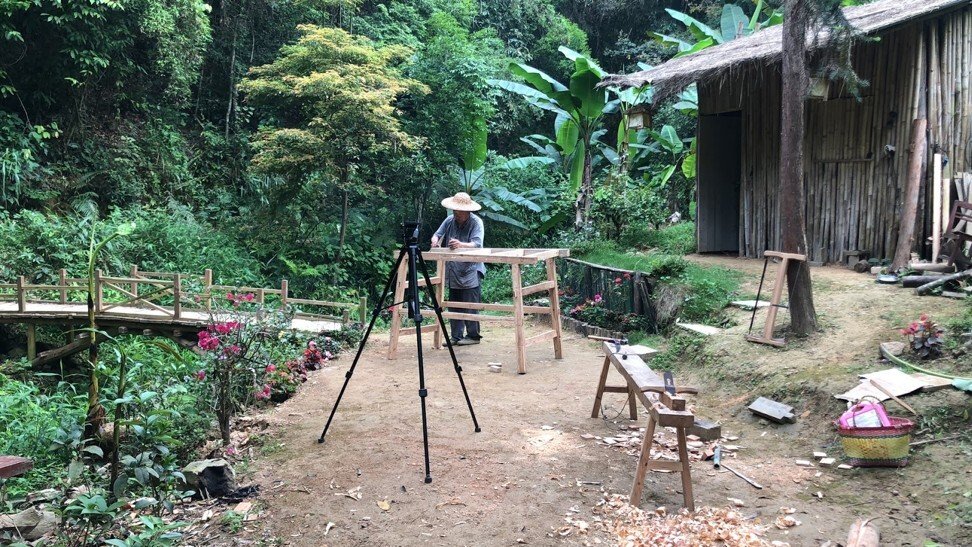 Wang goes by the name Grandpa Amu online. He has worked as a carpenter since picking up the skills at the age of nine. PHOTO: Wang Baocheng

The 63-year-old, though, insists he is no internet star – in various media interviews and over a phone call, he reiterates: “I’m just an ordinary farmer doing my job.”

Wang goes by the name Grandpa Amu online. The native of Shandong, a province in eastern China, has worked as a carpenter since picking up the skills at the age of nine. In 2017, he moved with his wife to Mengshan county in the autonomous region of Guangxi in southern China to take care of his grandson. 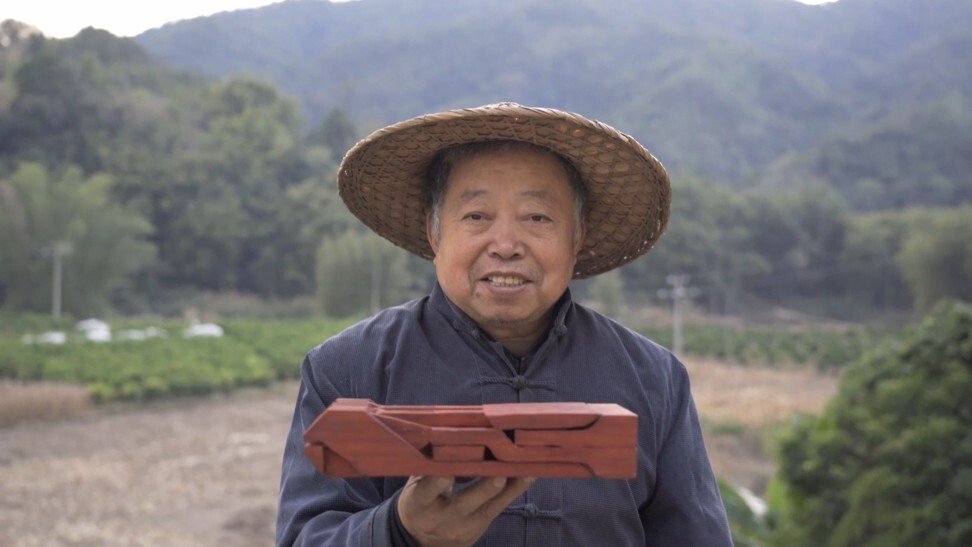 Wang uses the ancient woodworking technique of mortise and tenon in his designs. PHOTO: Wang Baocheng

Wang’s expertise in woodwork is just one part of the story – behind the camera is his 32-year-old son, Wang Baocheng, who has been in the internet industry for eight years.

In 2017, he started a small business filming videos about the countryside before he realised the potential of his father’s carpentry work.

He started focusing on his father’s woodwork, and the channel slowly gained popularity as more people began to appreciate Wang’s creations – from quirky toys for his two-year-old grandson to intricate crafts and larger structures.

Whether it’s a rocking chair or a wooden arch bridge, they are all built without glue, screws or nails.

Wang uses the ancient woodworking technique of mortise and tenon, which creates one of the strongest woodwork joints because of its flush-fitting design.

“With Guangxi’s beautiful landscapes and the rural lifestyle as a backdrop, I try to capture my father’s work in the videos with varying camera angles like panoramic shots or close-up shots,” says Wang Baocheng.

Wang works in silence in the videos, ignoring the camera. “It’s about letting the pictures speak for themselves. Words are completely unnecessary if the visuals can tell the story. This approach is beneficial too because it eliminates language barriers,” says Wang Baocheng.

Netizens have described Wang as a modern-day Lu Ban, referring to a revered Chinese woodworker who is said to have invented the saw and other carpentry tools.

Wang’s most popular videos show him building an apple-shaped, interlocking puzzle and a Lu Ban stool. The latter is carved from a single piece of wood that opens up to form a two-legged chair.

It was the Lu Ban stool that first propelled Wang to fame. YouTube viewers were astonished by his craftsmanship, and local news outlets soon picked up on his growing international fan base, thrusting him into the national spotlight with massive media attention. 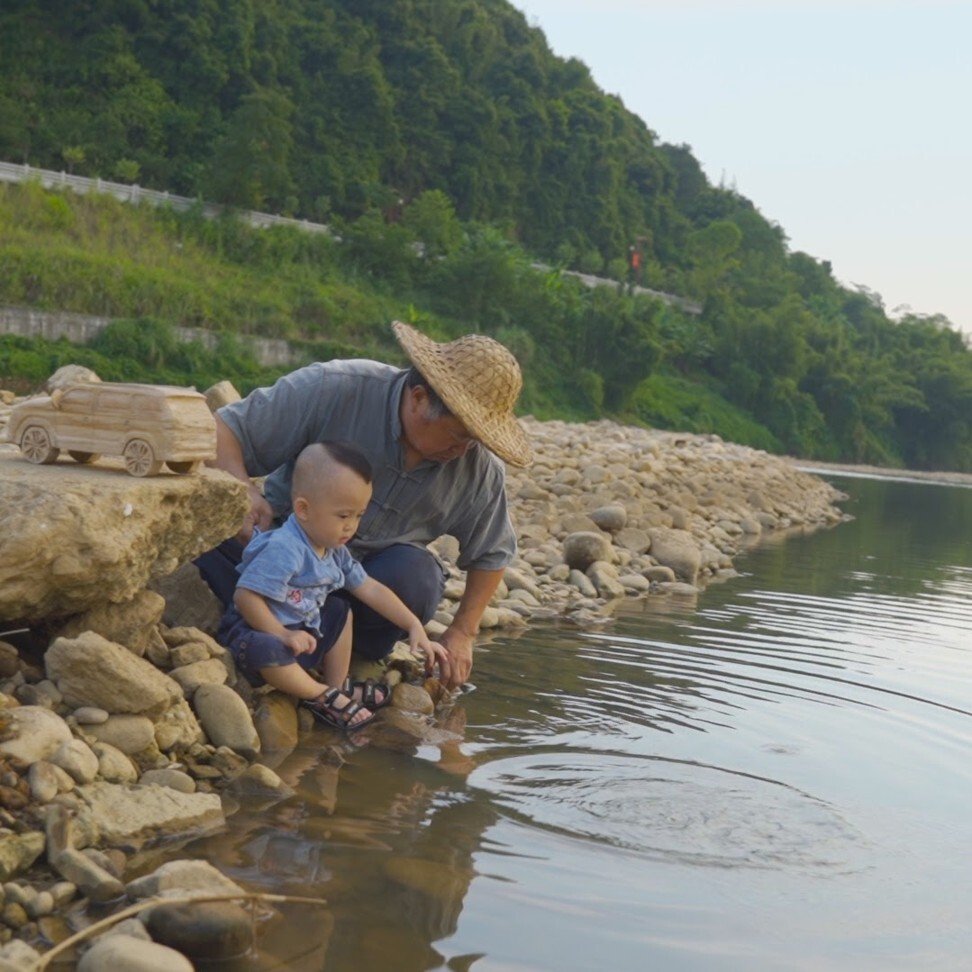 In 2017, Grandpa Amu moved with his wife to the autonomous region of Guangxi to take care of his grandson. PHOTO: Wang Baocheng

Since July, the father-and-son duo have been covered by large state media outlets such as People’s Daily , Xinhua and China Central Television. 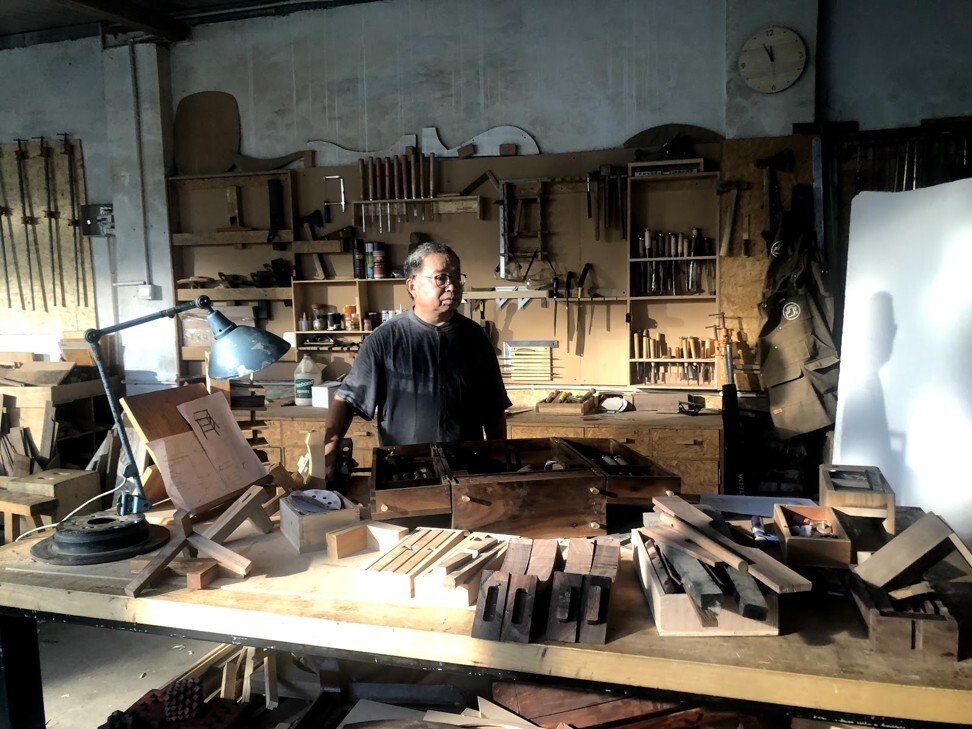 Grandpa Amu in his new workshop at his home in Guangxi. PHOTO: Wang Baocheng

But Grandpa Amu’s fame has its downsides, says his son.

“We have been accepting media interviews non-stop, so in the past two months, we haven’t uploaded much good work onto our channels. It is one of the biggest concerns we’re facing now.”

When asked about the volume of media coverage he gets, Wang says: “It’s all right. I’m just an old carpenter doing woodwork every day. In China, there are many more skilled carpenters than me. I am merely showing our traditional culture to friends at home and abroad.”

Still, viral fame has brought improvements to their home village. Riding on Wang’s popularity, the county government has built a “Grandpa Amu” attraction to bring in the tourists with the aim of reducing rural poverty.

Main roads were built, street lamps were added and the sewage system was upgraded.

The duo also built a carpentry workshop from scratch to showcase Wang’s crafts, which can be bought from their Taobao store (Taobao is owned by Alibaba, which also owns the South China Morning Post ). Grandpa Amu’s intricate apple-shaped puzzle can now be snapped up by his mainland followers for 198 yuan (S$40).

International fans, however, will have to wait. Wang Baocheng says global e-commerce operations are not set up yet, but it’s an area they will continue to work on.

“Whether it’s for local or international fans, we will strive to do better in our videos,” Wang says. “I certainly hope that more people will notice us, but to do that, we must first learn from others’ strengths and work on our own weaknesses.”

His son adds: “Our focus will remain on promoting the mortise and tenon technique, showing the unique crafts made with skill and to strengthen our Grandpa Amu brand.”