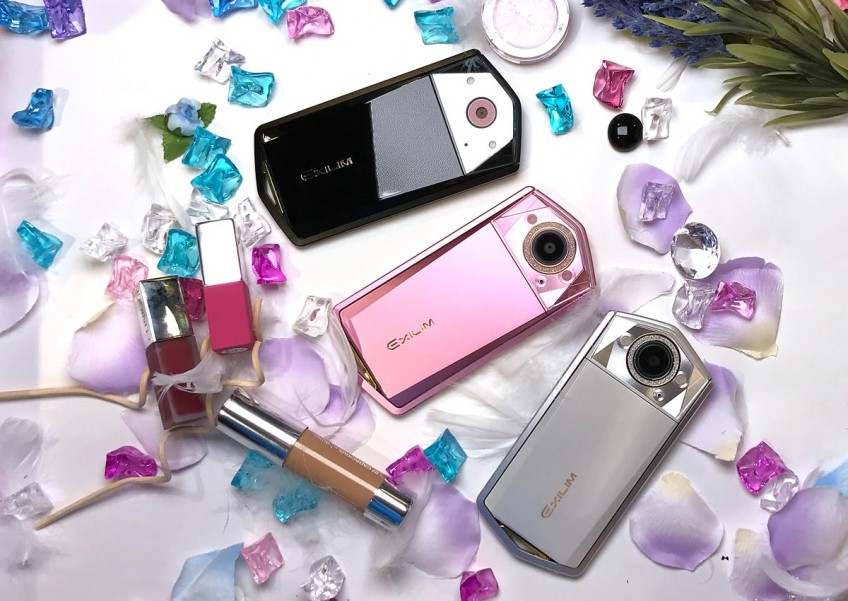 The Casio Exilim EX-TR80 looks much sleeker and more stylish than the previous generations, mainly because the rotatable frame is really thin.
The Straits Times

I know I am not good-looking, so posting selfies on social media is something I rarely do.

Hell, I even hate looking at the mirror when I brush my teeth in the morning.

So imagine my pain when I had to review the Casio Exilim EX-TR80, the latest iteration of Casio's highly successful selfie camera series.

Maybe it will actually prompt me to take more selfies.

The TR80 comes in white (the version reviewed), pink and black.

That's a good thing, as the TR80 looks much sleeker and more stylish than previous generations.

That's mainly because the rotatable frame is really thin.

There is a ring of glitter around the 21mm lens that adds more glamour points.

There are also angular motifs beside the lens for that extra sleekness.

So, you can contort the camera to almost any angle for that perfect selfie.

When I showed the camera to my female friends, they said it looks like an accessory than a camera.

At only 16.7mm thick, the TR80 is also slim enough to slip into a trouser pocket or a woman's handbag.

When I reviewed the TR60 two years ago, I found the body to be plasticky.

Not so with the TR80. It has a smooth metallic premium feel.

In addition, the TR80 has a bigger 3.5-inch screen, compared with the smaller three-inch display of the TR60 and TR70.

This makes it easier for you to compose your selfies.

Like the TR70, the TR80's shutter-release button is sited on the side of the display - not very intuitive to use, as you need to stretch your finger to reach the button.

I would prefer it to be placed on the frame, like in the TR60, for easier access.

On the bright side, the TR80 has a better dual-LED light flash for a more even coverage even in dim lighting conditions.

Like before, you can adjust the smoothness of your skin, face brightness, how defined your chin looks, as well as turn on or off the options of dark circles remover and slim face setting.

The resulting images always make your face glow and look slim, while retaining accurate colours and crisp details of your face and hair.

This remains the highlight of the TR series cameras, unlike some overzealous processing of its competitors that take away all the details of hair and neck.

A former beauty reporter-colleague who currently uses a TR60 tried the TR80 and felt that the defining feature of the TR80 is the new beauty video function.

I agree. The TR80 really delivers crisp and clear videos, while blurring out imperfections and giving the skin a soft candle-lit glow.

I think this is something most smartphones or other selfie cameras are not able to achieve for now.

A fully charged battery of TR80 will last you around 255 shots.

But, if you connect it to your smartphone for quick transfer of images, the shot count will inevitably decline.

Will I get one? No, I am still not into taking selfies.

But, for beauty bloggers, I think it is a must-have.

Verdict: For those who love to take selfies and looking for a camera to do that, the Casio Exilim EX-TR80 is a strong contender.