The changing face of crime 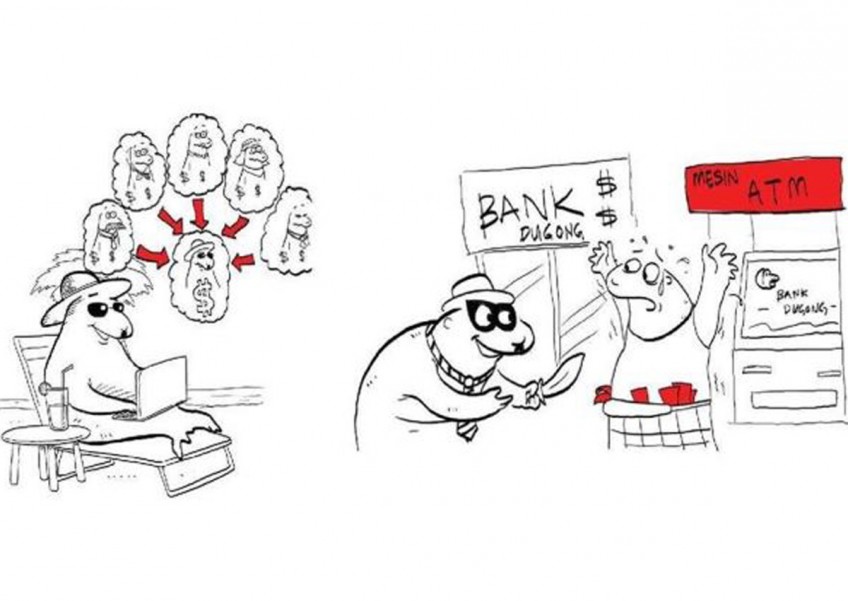 Earlier this year, I was invited to speak at the Interpol conference in Singapore.

Most of the speakers addressed cyber crime and I spoke about the brick and mortar crime in Malaysia - street crime, house break-in and so on. This is also known as "physical crime".

Three weeks ago, I was invited to speak at the Malaysian Crime Prevention Forum (MCPF) conference in Penang and the theme was on "terrorism".

It was a very good conference with good speakers from Malaysia and the region.

This time I decided to speak on the changing face of crime in Malaysia - from physical crime to cyber crime, border security and terrorism.

Going forward, we will shift gear in our NKRA Reducing Crime journey to include cyber crime as this type of crime will increase with the increase in economic activities in the country.

We started the NKRA Reducing Crime since early 2010. This is the sixth year of the journey and we have achieved good reduction in index crime.

However, the public is still suffering from the fear of crime and lacking trust in the police.

Cyber crime refers to any crime that involves a computer and a network. Whenever the rate of return on investment is high and the risk is low, we are bound to find people willing to take advantage of the situation.

This is exactly what happens in cyber crime.

The perpetrators are unlikely to be caught and chances of getting jailed is one for every 50,000 victims.

In the case of bank robbery, the chance of getting jailed is one in every five cases.

The boom in digital technology is changing the foundation of our society. On one hand, cyberspace is a place of freedom, creativity, and growth with "exponential" prospects.

On the other hand, perpetrators are taking advantage and exploit the space for their criminal activities.

Technology provides opportunities for criminals to conduct new crime and to commit physical crime like property crime in new ways.

Criminals can commit these crimes with access to countless victims, often with anonymity and from anywhere in the world, making them difficult to detect and pursue.

Those days, a thief had to sneak into my office or study and go through my files to steal the data.

Today, the thief would just need to hack into my computer files in cyberspace. The mode of committing crime has definitely changed and the forensic is also changing.

In physical crime, the perpetrator leaves behind forensic evidence that is normally quite clear.

In cyber crime, the perpetrator sometimes does not leave behind a clear trail of evidence that can be accounted for quickly after the crime is committed.

As at 2014, there are about three billion Internet users representing 45% of world population penetration.

With businesses and governments increasingly relying on computers and Internet-based networking, our vulnerability to cyber crime has increased accordingly.

Many developed countries have found that while physical crimes are falling in terms of the number of incidents, cyber crime is on the rise.

This is clearly demonstrated, for example, in the case of the United States and Malaysia.

The global impact of cyber crime amounts to more than many countries' national income, totalling more than US$400bil (RM1.66 trillion).

According to McAfee, the cost of cyber crime to the US economy is approximately US$100bil (RM414.4 billion).

The cost of property crime (which is part of physical crime) is estimated at US$177bil (RM733 billion).

For developed economies, the implications are more serious as it impacts employment.

Studies have shown that losses from cyber crime in US could cost as many as 200,000 American jobs and cause a shift in employment from those jobs that create more value.

There is another aspect of the cyber crime that is of concern to governments around the world.

We see cyber crime extending into the domain of the traditional organised crime such as drug trafficking, facilitation of illegal people trafficking and the counterfeiting of goods.

Many organised crime groups maintain links with their counterpart in other countries to conduct their operations.

With the Internet and mobile, they can take advantage of poorly regulated spaces and advanced logistics to move almost anonymously.

The United Nations Office for Drugs and Crime (UNODC) estimates that the turnover of transnational crime groups is in the region of US$870bil (RM3.6 trillion).

Take the illicit drug business; it is worth around US$600bil (RM2.48 trillion) per annum or about 5% of the world GDP.

The landscape definitely has changed.

I was reading a management book titled I am the market by Luca Rastello. The book is about smuggling cocaine from Colombia to Europe by the tonne, and living happily.

If you go to our northern States, you can see that a certain percentage of the locals are on drugs like "Pil Kuda" (Amphetamine) and "Pok Teh" (Heroin).

The supply is believed to have come from the Thailand border.

Smuggling across borders could be relatively easy although it may not be in the same scale from Colombia to Europe.

It is an organised crime with the use of Internet and mobile.

The future trends of organised crime are already here at our doorstep - going underground, using crime as a service business model, leveraging on digital tools and technologies and targeting the more vulnerable elderly population and legal business structures.

It could be an even more flourishing industry than we know, as there is a "darknet" that some people call "the underground for the underground".

It is a subset of the Internet where the sites are not indexed and are not accessible through Google, Yahoo and Safari.

The darknet highway is believed to be 500 times in size compared to the Internet we are using today.

Both traditional crime and cyber crime are operating in Malaysia. However, the fear of crime in cyber crime is different from that in physical crime.

Is this because of the proximity between the perpetrators and us?

For example, is taking my money from the cyberspace different from taking money when breaking into my house?

Fear of crime in physical crime is a social problem affecting our quality of life. Hence the police will continue to intensify its efforts in reducing the fear of crime.

It will continue to build trust with the public, as trust is a key factor in reducing the fear of crime.

Furthermore, building and sustaining trust with the public is the hallmark of effective policing.

The key to strengthening the bond between the police and the public is the police's understanding and dealing with the public's key concerns.

Hence many of the initiatives are centred on reconnecting with the public - such as omnipresence of police officers in busy areas, having police sergeants work with residents' associations in community neighbourhood watch to identify areas of concern and using the social media to talk about positive programmes and stories.

With better communication and more interactions between the police and the public, we can reduce the fear of crime and together focus on preventing crime.

The trust and confidence between the police and the public will facilitate not only the efforts to prevent traditional crime and anti-social behaviour. It will also pave the way for more intelligence in detecting and curbing cyber crime.

Hence in closing, I would like to reiterate the following.

Whilst the police are gearing up to tackle new and emerging crimes, it remains focused on bringing down traditional crime and reducing the fear of crime.

The police will take the fight wherever the crime is - whether in the physical realm or cyberspace.

We have a role to play, too. When it comes to protecting against physical crime, there are obvious things we should and should not do.

For example, we would never leave the house without first locking the door, and would not leave tell-tale signs that we are off on holiday.

However on the digital, we give tell-tale signs on the Facebook and so on.

For some reason, many of us do not carry the same sort of common sense when we go online.

Datuk Dr Amin Khan is Director of Pemandu's Reducing Crime NKRA. He can be reached at aminkhan@pemandu.gov.my.

The views expressed here are entirely the writer's own.