China’s live-streaming video market will need tougher regulation to stop the spread of vulgar content and low-level entertainment, according to a commentary published on Thursday by the Economic Daily , sending a fresh signal that Beijing could tighten supervision on the likes of ByteDance, Kuaishou Technology and Bilibili.

This market, currently with about 130 million live-streaming video accounts, has become “a game for traffic flows, as operators compete on who can be as vulgar as possible”, according to the Economic Daily, which is a newspaper directly under the Central Committee of the Chinese Communist Party.

“If we just blame this on the improper behaviour of live-streamers and ignore the improper distribution mechanism of platforms, we will be missing the point,” the commentary said. “If platforms prefer traffic flows [over high-quality content], this will surely create a group of low-quality, vulgar and pandering live-streaming video accounts.”

The opinion piece, which was republished by Communist Party mouthpiece the People’s Daily , has come on the heels of a campaign recently launched by China’s top propaganda agencies to limit the role of algorithms in online content distribution.

While the Economic Daily ’s article did not identify any company in China’s live-streaming video market, investors of publicly listed providers took the cue.

The shares of short video-sharing app operator Kuaishou plunged 15.3 per cent to close at HK$89.10 (S$15.50) on Thursday in Hong Kong. Kuaishou’s share price has declined over the past three quarters since its peak of HK$417 in February. Shares of Bilibili, often described as China’s answer to YouTube , closed down 3.2 per cent to HK$628. That marked the stock’s lowest level since its Hong Kong trading debut on March 29 , when it closed at HK$800.

The Economic Daily article cited the widely reported local news about a herd of elephants that left their home in the Mengyangzi Nature Reserve in Xishuangbanna, southern Yunnan province, to trek 500 kilometres north in search of a new habitat. 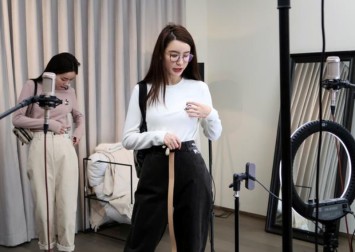 “Some live-streamers were doing streaming sessions in which they ate the leftovers of elephants,” the newspaper said. “That was an eyesore and made many other users grumble.”

The commentary questioned the business model of live-streaming video platforms, which direct online traffic flows to their most popular content creators. Typically, the more viewers a live-streamer can attract, the more income this content creator can earn – either from the platform, tips from their audience or sales of goods from their online store.

“Platform companies will need to put the relationship of content and traffic in order, and go back to the right values,” the commentary said, pointing out that “content is king”.

The articles once again puts the spotlight on the country’s internet industry, which has seen increased scrutiny by Beijing. The Ministry of Industry and Information Technology recently launched a new nationwide campaign to purge what it deems as problems in the internet industry .

“Nothing in the tech industry is off limits for regulators,” said Mark Tanner, managing director at Shanghai-based research firm China Skinny. “The live-streaming industry, in particular, has become unwieldy. It’s the Wild West more than some of the other industries that are being regulated, so the chances are there will be further intervention.”

Still, Douyin and Kuaishou have regularly published reports about their efforts to clean up content on their respective platforms. Last week, Kuaishou posted on its official WeChat account that it removed more than 129,000 short videos in July. Meanwhile, Douyin removed more than 189,000 short videos in June, according to a report published on Jinri Toutiao.