Cities across China have been trialing face recognition payment systems for their subway networks. Now Zhengzhou, the capital of northeast Henan province, has become the first to roll out the technology on a wide scale.

Starting Tuesday, local commuters can board and exit any of Zhengzhou's subway stops using an optional face scan, according to a report in the Henan Daily.

The roll out comes as China is pushing the AI-enabled technology into all walks of life, from catching wanted criminal suspects and preventing ticket scalpers to saving public toilet paper and checking on class attendance.

Since the service began trials in September, nearly 200,000 commuters in Zhengzhou have elected to authorise face-scan payments using a local metro service app, according to the report.

While Zhengzhou is among dozens of Chinese cities to introduce such trials, it is the first to deploy the service across its entire subway network. Last week, Beijing started a trial of fast track security checking by face scan at one of its subway stations.

Face scan payment means commuters do not have to carry cash or use stored-value metro cards and smartphones, making it a hands-free process, especially convenient if they are carrying luggage or are with children.

Still, the expanding use of face scans across China has prompted growing concerns over data safety and user privacy. Last month, a law professor in east China sued a wildlife park for breach of contract and infringing on consumer rights after it replaced its fingerprint-based entry system with one that used facial recognition.

On Sunday, China introduced regulations that require telecom carriers to scan faces of users registering new mobile phone numbers. Before, registration only required a copy of a person's identity card.

The Ministry of Industry and Information Technology said the new measure would help to stem the resale of sim cards and protect people from unknowingly registering for phone services in the event of their identities being stolen. 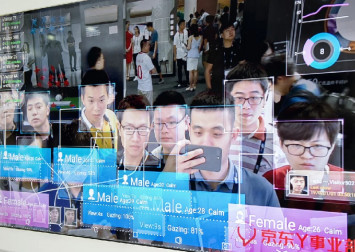 Face-scan payment technology has "bright prospects" among a wide range of applications, according to Chen Jing, a member of the State Council's Advisory Committee for State Information and former chief of the central bank's technology division.

About 118 million Chinese have signed up for facial recognition payments this year compared to 61 million in 2018, according to a report issued last month by iiMedia Research.

By 2022, the research consultancy expects the number of users to exceed 760 million, about half of the country's population.

Last month China also set up a National Standardisation Group for Facial Recognition Technology to study and form industry standards, according to Chinese AI start-up SenseTime, which is head of the group. Other participants include Tencent, China Ping An, Ant Financial and iFlyTek.