Screengrabs of a virus-themed game co-launched by the publicity department of Haidian District Committee and People's Daily and developed by ByteDance-owned Ohayoo.

As the coronavirus outbreak continues to spread across China, a local government department has teamed up with an official newspaper and a casual gaming studio to create a game where players fight outsize cartoon viruses with disinfectant and N95 masks.

The game, launched on Monday, was initiated by the publicity department of the Haidian District Committee in Beijing and ﻿People's Daily, an official newspaper of the Central Committee of the Communist Party of China.

In the game, players prevent different viruses - including the novel coronavirus, SARS and MERS respiratory diseases - from hitting a female character by slicing them up, in a format popularised by legendary melon-chopping game Fruit Ninja a few years ago.

Inspired by the behaviour of viruses in real life, the villains in the game can mutate and replicate, making them harder to destroy. At the end of each round, a health care tip appears on the screen.

Shanghai resident Ma Xiaomeng, 28, said she liked the level of detail in the game. "When viruses drop, the body temperature [indicated by a thermometer beside the female character] will go up. And when there is a mask, there'll be a protection cover [above her]. I think it's cute," she said.

Chinese authorities have been seeking greater control of the country's gaming market, centralising game license approvals under the Communist Party propaganda department in 2018.

"Innovation in games is crucial to the development of the domestic game industry," ﻿People's Daily wrote in a report about the virus-themed game on Sunday. "At the same time, it is important to insist on good morals and social responsibility to ensure the industry is marked by positivity."

As outbreak prevention measures confine millions of Chinese people to their homes, online games have seen a surge in play time and in-game purchases. Another pandemic-themed game, Plague Inc., was the most downloaded paid iOS app in China for three and a half weeks since late January, according to App Annie.

"Battle of pathogens" is meant to help players "release stress from long-term restrictions on going out" while also dispensing knowledge on epidemic prevention measures, according to ﻿People's Daily.

Read Also
Plague Inc developer reminds players to get info on coronavirus from authorities, not the game 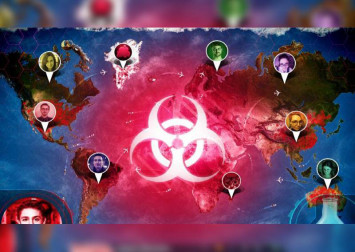 The mini game is now available on Tencent's super-app WeChat, and will also be available on ByteDance's Chinese version of TikTok, Douyin, and its news aggregator Jinri Toutiao, later this week. A stand-alone app is also expected to be released soon, state news outlet ﻿Beijing Daily reported.

ByteDance, the parent company of Ohayoo, has been ramping up efforts to leverage its existing base of hundreds of millions of users from its apps to make headway in the domestic gaming industry, which is still primarily the domain of rival tech giant Tencent.

The start-up's well-publicised initial foray into the games business was Music Jumping Ball, a casual game released via Douyin in February last year. It has also reportedly built a team of more than 1,000 to support its debut in the non-casual games segment with the release of two new titles this year.

ByteDance did not immediately respond to a request for comment. A Tencent Games representative declined to comment on rivals but said the company has been sending health care tips to players via its gaming platform in view of the coronavirus outbreak.