US public safety agencies are rapidly adopting unmanned aircraft from Chinese drone maker DJI Technologies even as the Trump administration voices security concerns that the devices could be sending sensitive surveillance data back to China.

"Between 2015 and 2018 we have seen 500 per cent growth of drone adoption by public safety agencies in the US," Jan Gasparic, director of strategic partnerships at DJI, said at the RISE tech conference in Hong Kong on Wednesday. "The reason for such a fast rate is because this technology has a transformative impact on the type of work they do."

The rapid adoption of drones in safety agencies illustrates DJI's strategy of sharpening its focus on its industrial business with new products to offset slowing growth in the broader consumer market.

"DJI started as a drone company but will not only play in that field," said Gasparic. "We are always taking different approaches to put core technologies into new products and [product] categories."

In May, CNN reported that the US Department of Homeland Security alerted American companies to "be aware" in case their unmanned aerial systems (UAS) data was "being stored by the vendor or other third parties".

The alert from the department's Cybersecurity and Infrastructure Security Agency, according to CNN, stated that the drones were a "potential risk to an organisation's information".

The warning did not name any particular manufacturer, but fuelled speculation that DJI - which accounts for nearly 80 per cent of the drones used in North America, according to data from Skylogic Research - might be banned from selling in the US.

This week DJI announced two high-security drones intended for government use. Known as the Government Edition models, they have received clearance from the US Department of Interior, which is responsible for evaluating and approving drone technology for use across a wide range of applications. 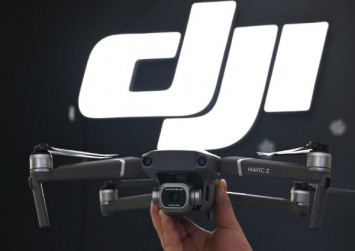 While filmmakers were the first to embrace drones for their ability to replace expensive helicopters as a means to get aerial footage, the unmanned aerial systems are now being widely adopted by public works agencies to carry out safety inspections of infrastructure, Gasparic said in a presentation at RISE.

Drones are also used to manage and maintain energy grids and are increasingly being adopted by the agricultural industry.

DJI has repeatedly denied that its devices send flight data to China or elsewhere, but to address such concerns it announced last month a plan to open new manufacturing lines in the US.

Shenzhen-based DJI, founded in 2006, has grown from a cramped room in a university dorm to a global enterprise with 14,000 employees and 17 offices internationally. Its new headquarters in Shenzhen, set to open in 2022, will house all its operations under one roof.

The company controls more than 70 per cent of the global commercial and consumer drone market and generated sales of 18 billion yuan (S$3.56 billion) in 2017, an 80 per cent jump from the year before.