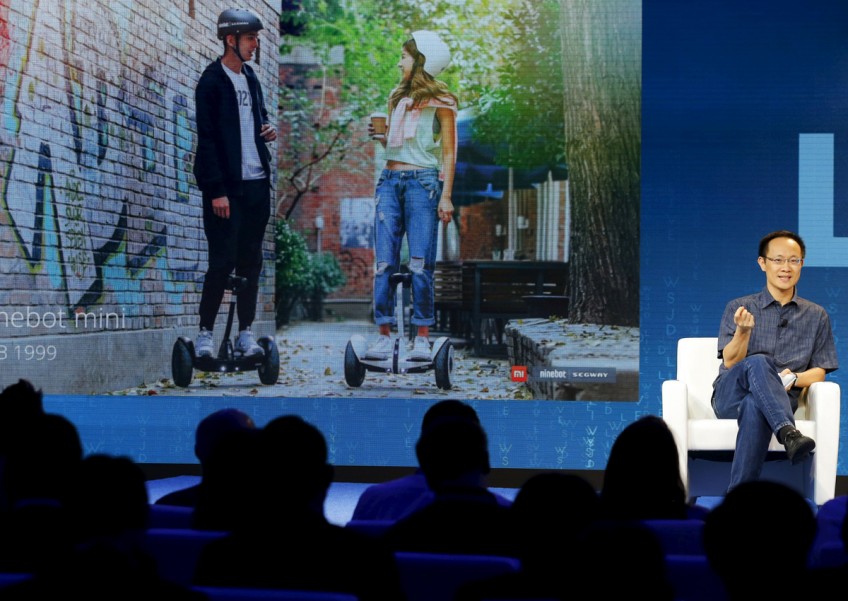 LAGUNA BEACH, United States - Leading Chinese smartphone maker Xiaomi is aiming for a future as an Internet company with the potential to cross swords with titans such as Alibaba.

Xiaomi co-founder and chief executive Bin Lin on Wednesday shared a vision of a future that includes Segway-like self-balancing scooters and smartphones and a role for the company in e-commerce, digital movies and games.

"We'd rather be called an Internet company," Lin said during an on-stage interview at the WSJD Live technology conference on the Southern California coast.

"We are really focusing on building out smartphones as the centre of all these smart devices that are launched." Xiaomi smartphones can be used to control the company's recently introduced Ninebot mini scooter.

The Xiaomi handsets can also be used to remotely control a new Mi TV model, according to Lin.

"We think of the TV as yet another smart device," Lin said. "It is almost like a phone except it is a much bigger display." The path ahead for Xiaomi includes providing online services and digital content, like games, rather than just selling televisions or smartphones, according to Lin.

While most of Xiaomi's revenue now comes from hardware sales, he predicted that would shift as Xiaomi gets deeper into online services, content, e-commerce, and even financial services.

That vision would have Xiaomi challenging Chinese e-commerce colossus Alibaba.

"On the hardware side, we think we have advantages over Alibaba," Lin said.

Apple, a winning model when it comes to combining the power of mobile device hardware and software, is already a thriving rival to Xiaomi in the premium smartphone market in China.

Lin brushed aside a suggestion that Xiaomi copied features from iPhones.

"For every single tiny similarity between us and Apple, I can probably point out a hundred differences," Lin said. The Chinese smartphone market is shifting to a flat, if not declining, upgrade scenario after boom years of people snapping up their first handsets, according to Lin.

He said that Xiaomi is doing well in India, and has sold more than three million smartphones there since expanding to that country last year.

In just five years, the Chinese firm has become the world's number three smartphone vendor, behind only Apple and South Korea's Samsung, with rapid growth in emerging countries.

It has yet to introduce its handsets to the US market but it has opened an online accessory store in the United States and major European countries, selling fitness bands, headphones and other gadgets.

[[nid:160924]]
SUBSCRIBE TO OUR NEWSLETTER
Your daily good stuff - AsiaOne stories delivered straight to your inbox