For clues to how TikTok will make money, watch its Chinese sister app Douyin

A smartphone shows a live-streaming session on Douyin, the Chinese sister app to TikTok.

Douyin, the Chinese version of TikTok, is doubling down on efforts to generate revenue through online sales and localised services such as food ordering, a move that will pit it against entrenched rivals such as Alibaba Group Holding and Meituan.

The aggressive drive by Douyin into live-streaming e-commerce and other sectors, on top of its strong advertising revenue generation, offers clues as to how the TikTok business model will evolve in overseas markets.

Douyin and TikTok, both owned by Beijing-based ByteDance, are powered by the same root algorithm.

Douyin, with 600 million daily active users in China, concluded its 921 Goodies Festival on Wednesday (Sept 21), an online event that it initiated itself, and the first to rival Alibaba's Singles' Day held in November and JD.com's 618 festival in June.

From September 9 to 21, Douyin users were given discounts and vouchers to spend on the platform when they shopped via short video or live-streaming sessions.

ByteDance's goal of turning Douyin into a powerful e-commerce platform received a boost this week when the video app partnered with a raft of Chinese courier services, including JD Logistics, SF Express and ZTO Express.

ByteDance did not immediately respond to a request for comment on the 921 festival.

In addition to online shopping, Douyin is ramping up similar tie-ups in lifestyle services such as food and grocery deliveries, an area dominated by Meituan.

Last month, ByteDance teamed up with Alibaba's food delivery platform Ele.me so that Douyin users who tuned into a nearby diner's live-streaming session could place an order without leaving the app and have the order delivered by Ele.me.

In July, Douyin conducted food delivery trials in several cities, including some that had their economies hit by Covid-19 lockdowns, such as Shanghai.

The company wanted to introduce more delivery options for businesses that urgently needed to send out group purchases, a ByteDance representative said at the time.

"Douyin has become a lifestyle instead of just entertainment," Douyin vice-president Zhi Ying said on Tuesday.

In the first half of the year, Douyin saw the gross merchandise volume of its online-to-offline business, which includes food deliveries and hotel reservations, soar more than 30 times compared with the same period last year. 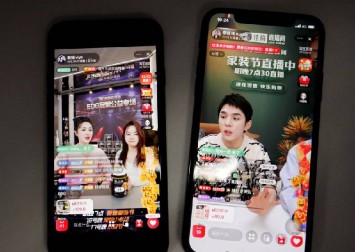 Operating in over 370 Chinese cities by the end of August, these so-called local life services are linked with some one million bricks-and-mortar businesses.

At its developer event hosted online in early September, Douyin vice-president Han Shangyou said the platform will provide multiple tools that integrate its services such as short video and live streaming to strengthen collaboration opportunities for vendors.

ByteDance, recently valued at US$300 billion (S$425 billion), making it China's most valuable unicorn, is seeking to diversify revenue sources as income growth slows and its initial public offering plans remain in limbo.

In 2021, the Beijing-based firm saw its revenue reach US$58 billion, up 70 per cent from a year earlier, according to Reuters.

The growth rate marked a drop-off compared with 111 per cent year-on-year revenue growth in 2020.