In the upcoming PC game, players are able to partake in a host of activities typical of most games in the genre: Farming, rearing livestock and building relationships with fellow islanders. But Coral Island – due to be released in 2021 – introduces an important addition: Conservation.

Island-building and farming games such as Nintendo’s hugely popular Animal Crossing and the role-playing game Stardew Valley are having a moment – allowing players to build their own paradise and live off the land – but environmental issues aren’t exactly an important consideration.

Players are encouraged to constantly plant more trees, to craft and make their own food, but the available natural resources never run out. Trees will keep producing fruit, oceans never run out of fish, and no matter how much trash you leave on the land, flowers continue to blossom.

This is something that bothered Jeremiah Bramble, co-founder of Indonesian game developer Stairway Games, who grew up on classics such as Harvest Moon. “If we were going to create a farming simulator, we wanted it to include topics that we find important,” he says.

The result is Coral Island. In the upcoming PC game, players are able to partake in a host of activities typical of most games in the genre: Farming, rearing livestock and building relationships with fellow islanders. But Coral Island – due to be released in 2021 – introduces an important addition: Conservation.

Not only do players have to care for cows and crops, they must take care of the island’s ecosystem to ensure that it, and their farm, thrives.

Diving is also a central mechanic in Coral Island, says Bramble. It allows players to explore the polluted waters that surround the titular island, a reflection of the problems facing oceans all around the world.

As players remove trash from the ocean, the in-game world changes: more fish, and rarer ones, appear in the water and fellow islanders react more positively to the character.

“We really wanted to create [a] positive feedback loop,” Bramble says. “Living and growing up in Southeast Asia, particularly Indonesia, exposes you to the seriousness of pollution, both on land and in the oceans.”

For Bramble, Coral Island is both a nostalgic tribute to the games of his childhood and a gift for his daughter. He wanted a way to introduce serious topics such as environmental issues to his 11-year-old daughter, who is herself a gamer.

“I grew up and lived in Bali for over 12 years, and my school always held annual beach clean-ups,” says Bramble. “Over the years, you could see the pollution getting progressively worse. Cleaning up that trash left a lasting impression on me and also made me conscious of my own carbon footprint.”

The environment in Coral Island is heavily inspired by Southeast Asian landscapes – Indonesia in particular. 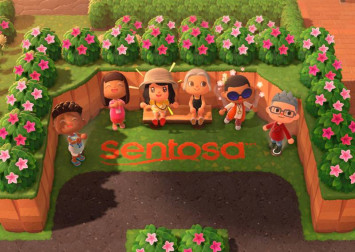 Players will spot crops, fauna, and architecture native to the region: “We’ve included things like ruins and architecture that’s based on Balinese Hindu temples, elements that don’t get much exposure and aren’t seen often in games,” says Bramble.

And with more than 50 non-playable characters in the game, Bramble says Coral Island comes with a diverse cast of faces and stories from “all walks of life”.

“Growing up in Bali exposed me to a wide variety of interesting people, and a huge pool of ethnic diversity,” he adds. “That made me want to see more diverse characters in games as well.”

Still, he is careful to note that they did not use token characters for diversity’s sake. “We didn’t start with a definitive list of what and who these characters should be,” he says. “We approached each one from the bottom up – and they relate back to world-building as well.”

As much as Bramble and his team want to send an important message about environmental protection, they were also wary of coming across as too preachy – and really, they just want people to have a good time.

“Above all else, I really hope people have fun on ,” he says. “Beyond that, it would be an accomplishment if people came away learning a thing or two about saving the Earth.”