From a metal, jewellery-like mask to crazy make-up and hairstyles, people are finding creative ways to confuse and subvert facial recognition technology.

In light of the global pandemic governments are deploying monitoring systems, such as facial recognition technology, to enforce quarantines and social distancing.

Plenty of people are looking to thwart this increase in surveillance in everyday life using everything from make-up to full-face masks. They are concerned about how the technology can affect civil rights, autonomy and freedom in public spaces.

Mark Andrejevic, an expert in surveillance and data mining at Monash University in Australia, says that isn’t always easy.

“People are developing systems and technologies for thwarting facial recognition, and even as they do it, folks that are developing the technology are looking for ways to make it more effective and more accurate. It’s very hard to do things at the individual level – I think we need to something at the public, regulatory level."

“The technology has made how things work different, and we need to develop rules for how this technology can be used that are enforced, but it’s not going to be easy.”

Andrejevic says that the pandemic may have raised the threshold for the level of surveillance that some people find acceptable, with facial recognition now used to help identify people with elevated temperatures in crowds and for contactless entry into buildings.

“It’s really a major shift in how we experience shared space, to imagine a world in which everywhere we go, we are recognised,” he adds. 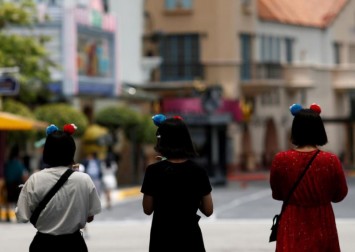 “Technologies like face recognition, gait recognition, that seek to implement mass customised surveillance, completely shift our understanding of what shared space is, and that’s why we see this kind of resistance to the technology.”

With mask wearing having become the norm during the pandemic, facial recognition technologies have adapted to focus on the top half of a person’s face.

This means face masks may not be enough if you want to hide from increasingly prevalent and powerful facial recognition technology – and those that are worried about this have sought to subvert this technology, armed with anti-surveillance masks, make-up, clothing, and even lasers.

For those resisting surveillance, here are some of the tools that are being used for exactly that.

Adversarial Fashion sells face masks and shields printed with circuit designs on them that seek to counter surveillance by “injecting junk data into the systems used by the State and its contractors”.

Hacker and artist Martin Backes has made stretchable, full-face pixel-print masks that only show a person’s eyes, and artist Leo Selvaggio has come up with a 3D prosthetic face.

Although it’s not quite a physical mask, designer Liu Jing-cai has an idea for a wearable face projector, which works by projecting a completely different face onto your face.

More jewellery than a mask, Polish designer Ewa Nowak has created a metal mask that can deflect recognition software in security cameras. She tested it using Facebook‘s DeepFace algorithm.

The Computer Vision (CV) Dazzle is a camouflage concept designed by Germany-based researcher and artist Adam Harvey. The idea is to use avant-garde make-up and hairstyling to create an “anti-face” to confuse facial recognition algorithms that rely on certain facial features.

Designs include multicoloured hair that blocks three-quarters of the face and a black colour swatch that is painted across the cheek.

Artists in London, Britain, founded the Dazzle Club to use CV Dazzle techniques to raise awareness of surveillance networks in public areas.

Joselyn McDonald, a designer and researcher in the US, used feminine and floral themes to design make-up that can disrupt facial recognition algorithms.

Her designs use flowers to hide key parts of the face, such as the eyes, nose and mouth.

Designers around the globe have tried to use fashion to avoid detection, too.

One is Sanne Weekers, from the Netherlands, who created an “anonymity scarf” which uses a print of human faces in an attempt to employ an “overload of information” to confuse facial recognition software. 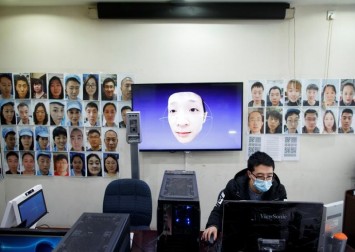 Another, by Dutch designers Marcha Schagen and Leon Baauw, is Project Kovr, which markets itself as a “wearable countermovement” and sells anti-surveillance coats and backpacks.

The coats use layers of metalliferous fabrics to block incoming and outgoing signals to allow people to “stay human in our information-driven environment”.

Adversarial Fashion, created by designer and hacker Kate Rose, sells anti-recognition garments – everything from jackets and hoodies to pencil skirts and tank dresses.

Researchers from the University of Maryland in the United States found that adversarial patterns on clothing can help someone evade detection – they showed that automated surveillance cameras can be fooled by a colourful, abstract-looking design patch on jumpers.