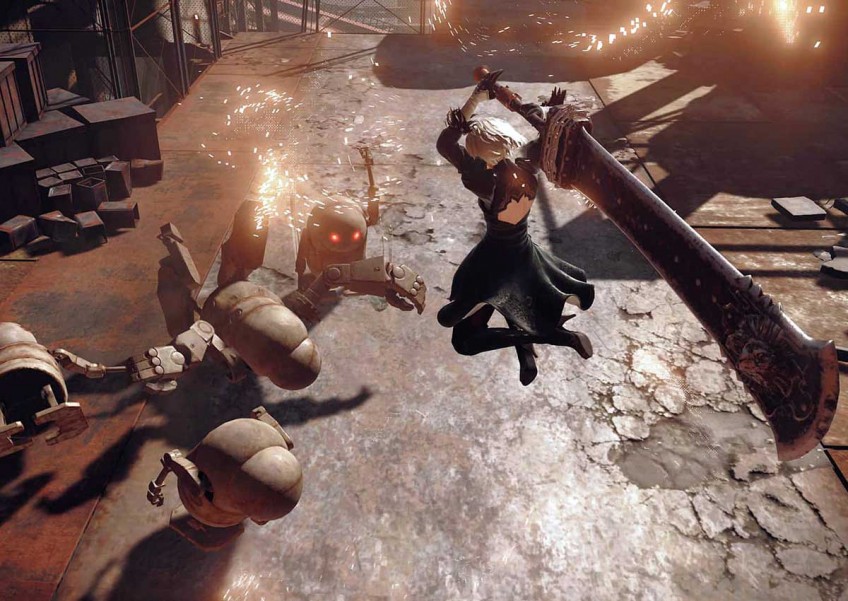 Nier: Automata is unlike any game I have ever played. Right from the start, it breaks the mould that games should fit into one genre or another.

While it is, by and large, an action role-playing game (RPG), Nier shifts seamlessly between genres.

Take its beginning - your character, a female android known by its 2B model name, is on a post-apocalyptic Earth that had been abandoned by humans centuries ago, after an alien invasion.

She has been sent from a space station to help retake Earth from the machine lifeforms created by the aliens. While Automata is a sequel to a previous Nier game, it works as a standalone title.

As 2B, you dodge missiles and shoot flying robots like you would in a Space Invaders-like arcade shooting game. Then, the camera swoops around, turning it into a 3D action game.

Nier keeps finding new ways to surprise me. It transforms into a 2D platformer like Super Mario Bros, followed later by a 1-v-1 face-off against a boss in a style reminiscent of Capcom fighting games.

That said, Nier does follow the RPG formula. Your character gains experience points and levels up. You upgrade her weapons with items that you find.

There are main story missions, as well as side quests. These optional quests can be tedious at times, as you have to fetch an item or kill certain enemies.

Combat is fluid, with your character capable of unleashing impressive combo moves. Boss fights are suitably epic, helped by a vocal-heavy soundtrack.

Your android can be improved with computer chips that offer certain abilities. Nier lets you fully customise your character, to the extent that even informative display elements like the health bar are treated as chips, and hence can be replaced with chips for attack or defence.

Nier has a neat network play feature. Like Dark Souls, the game lets you see the bodies of other fallen players but, unlike the former, you can salvage these androids for buffs, money and health, or repair them to help you fight for a short while.

Nier also has a different take on the New Game Plus feature in video games. Typically, after completing a game, you can replay it from the start using the same character, retaining all your gear and power-ups, but at a higher difficulty level.

In Nier, you start off playing 2B but once you finish her story, you are encouraged after the credits to start a new game as 9S, who you encounter in the in the first playthrough of the game as 2B's partner.

While 9S' storyline mainly follows that of 2B, including many of the same cutscenes (that, thankfully, can be skipped), it also includes some unique missions from his point of view, such as hacking mini-games presented in blocky graphics that look like something from the 1980s. Finish the game from his perspective and there is a third playthrough with another character that you meet briefly the first time round.

These different playthroughs fill the gaps in the story about what really happened on Earth, and change what you thought you knew. There are five proper endings, with more than 20 endings altogether. Most of these other endings are made for laughs as they are silly (and usually involve your character dying).

My only frustration is the lack of the usual autosave option. This seems like an anachronism, though it somewhat makes sense from a story-telling perspective, because when you save a game, your android is actually uploading its memories to a backup on a space station. Thus, you have to manually back up your android's memories, as there are only certain access points that are connected to the station.

Verdict: Nier marries fluid and fun gameplay with a thought-provoking story. Its character design, game art and soundtrack are excellent.