Although the game has been receiving generally positive reviews, it would appear that Far Cry 6 already has quite the laundry list of issues for Ubisoft to resolve.

Specifically, these can be broken down into the more "conventional" problems, like dipping frame rates on PC, to the more "unusual" concerns, like what the Latino branch of the People for the Ethical Treatment of Animals activist group, or Peta for short, has expressed.

Apparently, the animal rights group has recently raised concerns over the game's use of cock-fighting as a mini-game, and have demanded that the developer replace it with something that's less violent and in their words, "reprehensible".

Yet, what many folks online have found amusing about the whole situation is that Peta has stayed mum regarding the other animals that players get to fight during FC6. You know, like crocodiles and cougars.

So let me get this straight; you're worried about the chickens and not the other two animals that are potentially more endangered?

Hey, we understand where you're coming from. Cock-fighting is generally frowned upon in many parts of the world, but if you're going to order a pizza, why would you eat only one slice and throw the rest away? The math simply doesn't add up, though that naturally hasn't stopped the Internet from chuckling at the apparent double standard. 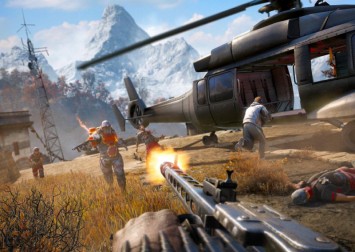 Furthermore, it's also worth mentioning that the cock-fighting minigame doesn't involve any actual bloodshed - it resembles a round of chicken-based Tekken more than anything, and FC6's developers felt that the sport was culturally significant enough to add into the Cuban-based country of Yara.

Speaking of which, Ubisoft has yet to declare their official stance on the matter, but from the looks of things, it doesn't seem like they're cutting it from the game any time soon.

What is coming soon, however, is our FC6 review, so make sure to stay tuned for that. We've been taking it out for a spin on the PS5 and haven't encountered any severe dips in frame rate thus far, so perhaps the issue might be limited to folks playing on PC and current-gen consoles like the PS4.