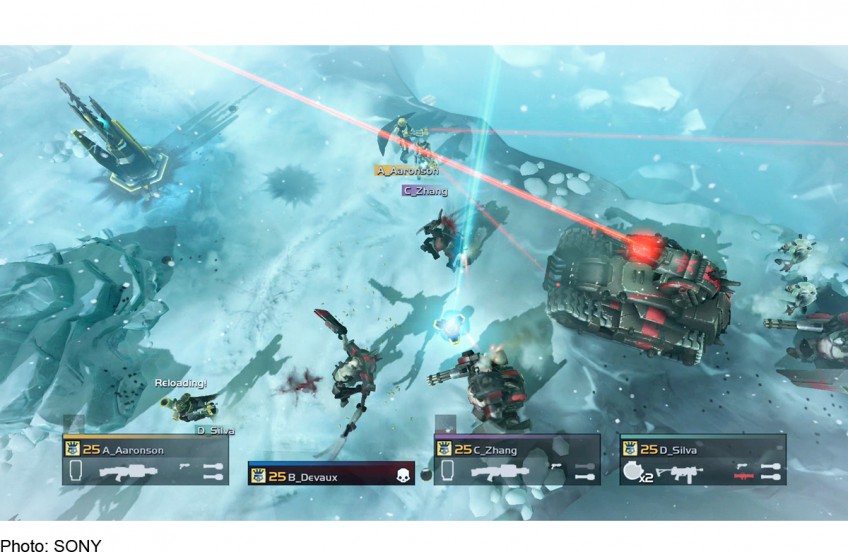 Helldivers is "helluva" fun. It starts with a well-paced series of tutorials which ensures a smooth learning curve. Before you know it, you are on your first mission in humanity's endless galactic battle against three alien forces - the Bugs, the Cyborgs and the Illuminates.

Each alien species has its own unique characteristics. The Bugs are plentiful, largely unarmoured and will "zerg" towards you. So, shotguns and flamethrowers work well on them.

The Illuminates, like the Protoss from Starcraft, own advanced technology. Being heavily armoured, the Cyborgs will often need armour-piercing weapons to quell.

This isometric or top-shooter lets you carry up to three weapons at a time - two primary weapons plus your trusty pistol sidearm to be used in times of desperation.

You start with only an assault rifle but your armoury expands as you complete quests. At level 8, I mainly use a laser gun (no ammo needed) and a flamethrower (very effective against Bugs) as my primary weapons.

As you progress, you will unlock new weapons, research points, perks and strategems. Strategems, the dictionary will tell you, are schemes to outwit the enemy. In this game, this is stuff you can call down from the sky to aid you on the battlefield.

Starting with only a handful, you unlock many more as you progress. You can summon an airstrike to decimate a swarm of enemies, airdrop powerful guns and even summon a giant walker - like in Titanfall - to turn yourself into a one-man army.

You are limited to only five strategems at a time, so you must choose carefully. Not all are suitable for combat. Jet packs are essentials for me, because they let you leap out of danger. So is the sensor drone, which automatically explores the map for research samples. Such samples earn you valuable research points which you can use to upgrade your weapons and your strategems.

You can play with three friends or be matched with strangers over the PlayStation Network.

Thankfully, teaming up without having to communicate is quite easy. But do watch out for newbies. In this game, you can die from friendly fire.