University of Sydney researcher Zhanwei Hou holds his son Baoxi during a video call with his parents, who have been unable to visit their first grandchild because of the pandemic.

PHOTO: The University of Sydney

In October last year, Sydney-based couple Zhanwei Hou and Haiqin Li welcomed a healthy baby boy. For the first-time parents, the arrival of Baoxi brought a lot of joy – and a tinge of sadness.

Travel bans and border closures introduced to control the spread of Covid-19 have divided families and loved ones, and Australia has some of the strictest border restrictions in the world. This means Hou’s parents – who live in the Chinese city of Zhangjiakou, in Hebei province – have not been able to visit.

“It’s been very tough. My parents have not been able to cuddle their only grandchild,” says Hou via Zoom from Sydney, which is currently in lockdown as the city battles an outbreak of the Delta variant of the coronavirus.

The last time Hou saw his parents was Christmas 2019. His wife’s parents are also in China, along with his wife’s brother and two nieces.

While families have stayed connected via computers and mobile phones during the pandemic thanks to video calls and the sharing of photos, they are missing personal contact.

“During one video call to my parents, the baby started crying – maybe he was hungry or sleepy. Babies cry a lot – it’s to be expected,” Hou says. What he didn’t expect was his 64-year-old father’s emotional reaction.

“I had never seen my father cry and I didn’t understand why he was so emotional,” he says. “Later I realised it was very hard for my parents because they have not been able to touch the baby."

"What my parents want more than anything – they have even dreamt about it – is to pinch my son’s chubby arms and lull him to sleep.”

The call motivated Hou, a researcher at the University of Sydney’s Centre for IoT and Telecommunications, to pursue work on the tactile internet, which he says is the future of communication.

It allows the real-time transmission of haptic information – touch, motion, vibration and surface texture, for example – over the internet, in addition to conventional audiovisual information.

Despite lockdowns over the past year, Hou has dedicated himself to his mission, driven and determined, spending time in the university when others were stuck at home.

At the core of the research is the development of a low-latency communication method, he says, referring to a tactile internet system that executes tasks and returns haptic feedback results in the shortest amount of time possible. 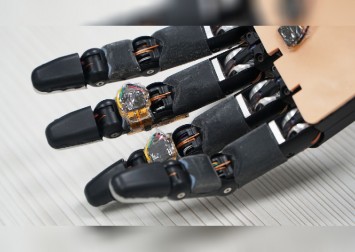 “For tactile internet to work, we need to reduce latency and increase precision so that there is no perceptible lag.”

He hopes that, in the next five to 10 years, this will allow users to “touch over the internet and allow families to hug and colleagues to shake hands while geographically separated”.

While the technology is complicated and cutting-edge, Hou – an electrical and information engineering expert – makes the process sound simple. On the Zoom screen he plays a demonstration video.

For a person to touch something or someone remotely, he says, a user wears a highly sensitive glove or some type of tactile device which can render the sense of touch and transfer that sensation to the user.

The receiver wears a device, such as a robotic avatar, that mimics the movement of the human operator and collects the touch feedback using tactile sensors.

While the pandemic has created the perfect environment to showcase technology such as the tactile internet, Hou says it’s important to stress that these networks are designed to supplement human touch, not replace it.

“I’m not an expert in psychology, but we know that physical touch is very important to early child development, human communication, and physical and mental well-being,” he says.

The tactile internet has numerous applications, he says, such as helping consumers feel a fabric when shopping online, or diagnosing a medical condition for a remote patient. “What we are doing is developing the fundamental communication technology for these sort of use cases in tactile internet.” 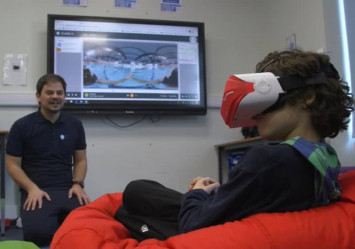 The technology also has potential uses in arts and education, such as remotely helping people learn to play the piano or create calligraphy.

“Tactile communication and touch applications will be at the heart of 6G technology and ‘industry 5.0’– which are based on next-generation technologies aimed to improve interactions and collaboration between humankind and machines,” Vucetic said in a statement.

“To achieve this, our technology is using deep learning to increase reliability and reduce latency for optimised communications.”