As part of the "smart prison" initiative to modernise the city's correctional facilities, a closed-circuit television system with a video analytics function to detect suspicious behaviour among inmates is being tested, as is a smart wristband.

Commissioner of Correctional Services Danny Woo Ying-ming told the Post the CCTV camera can be equipped with facial recognition technology, while the wristband, which have to be scanned before entering a room, can be used in future to verify inmates' identities and monitor their whereabouts at any given time.

"If I want to know how many inmates and who exactly is in the sewing factory, for example, the three systems can work together," he said.

"At present our staff have to do a manual headcount, which does not verify inmates' identities. You don't know who is who."

Woo hopes to try out the upgraded systems by the middle of next year.

At Lai Chi Kok Reception Centre in Kowloon, a robot prison guard has begun patrolling the prison premises in a trial which began in September. Made in the Netherlands and costing around HK$600,000 (US$76,500) it is equipped with a camera and microphone and moves around on six wheels.

Prisoners and officers can speak to each other through the robot's remote conversation function, while its camera sends high-definition images instantaneously.

Human warders need to patrol the premises every 15 minutes, taking about nine minutes to finish one round. The robot takes six minutes.

"We can set the speed of the robot," said Woo, who believed more frequent robot patrols would not only ease the burden on his officers but also keep a closer eye on inmates.

"Inmates have been known to hang themselves in the interval between patrols. We cannot ask our staff to patrol every five minutes."

In future, the robot could be equipped with an infrared camera to check on inmates in their cells.

Woo hoped the technology upgrades would help protect staff, raise their sense of professionalism and reduce the rate of turnover, which was worse than for the city's other disciplinary forces.

Among the prison staff who quit, the wastage rate for junior staff hit 6.77 per cent in the financial year of 2017-2018 - a five-year record high.

Woo hoped the use of technology would make a difference for younger officers especially.

"Millennials use digital technology all the time, but our staff can use none, not even their own mobile phones, when working behind bars. They feel disconnected. We need to change," he said.

By the end of his year, staff at a selected prison will receive a smart tablet so that they can make calls during their breaks.

The "smart prison" project was an initiative Chief Executive Carrie Lam Cheng Yuet-ngor mentioned in her policy address last October and the department has been testing various devices in specific institutions since then.

The Post reported previously that the department was considering giving all inmates a tablet computer to use for e-learning, entertainment and to help prepare for life in a technology-saturated world.

Woo said it would run a trial at Stanley prison by early next year and prisoners would be able to use their tablets to write emails too. 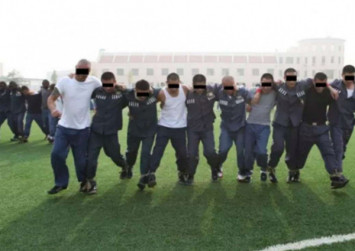 Many countries have been developing smart prisons in recent years.

In Belgium, some prisons have installed a secure digital service enabling inmates to access television and films, e-learning and web pages about health care, jobs and legal matters.

Singapore's Changi prison has been testing facial recognition technology to see whether an automated system can replace muster checks of prisoners that have to be done manually by officers.

Hong Kong's correctional institutions had an average daily population of 8,303 last year, down slightly from 8,529 in 2017.

The percentage of ex-prisoners returning to jail within two years of their release dropped from 39.9 per cent in 2000 to 24.8 per cent in 2016. In comparison, the United States' reoffending rate was 76 per cent that year, and Norway's was 20 per cent.