A Tencent sign is seen at the World Internet Conference in Wuzhen, Zhejiang province, China, Oct. 20, 2019.

It’s not every day that a tech titan falls for a million-dollar scam. But Tencent is now taking the embarrassing episode in stride, making fun of itself on social media after being tricked by a group of fraudsters posing as the maker of China’s beloved chilli sauce, Lao Gan Ma.

“I’m the silly penguin who ate fake chilli sauce,” wrote Tencent, which uses the flightless bird as the company mascot, in a tongue-in-cheek Weibo post on Wednesday evening. It includes a video mocking the incident, along with the hashtag “Tencent offers 1,000 bottles of Lao Gan Ma for clues on the swindlers.”

The much-discussed saga began on Monday. A newly published verdict revealed that a Shenzhen court ruled in April that it would freeze over 16 million yuan (around S$3.2 million) worth of assets belonging to Lao Gan Ma.

As news of the case started trending across Chinese social media, Lao Gan Ma released a statement on Tuesday. The company had never signed a marketing agreement with Tencent, the company said, and didn’t assign anyone to do so on its behalf. It reported the case to the police.

That’s when the mystery intensified: Why would anyone besides Lao Gan Ma want Tencent to promote the spicy seasoning?

The answer came the next day. Police in Lao Gan Ma’s hometown of Guiyang said it arrested three people - a 36-year-old man and two women aged 37 and 40 years old.

It turns out that the suspects were eyeing the free gifts that came with Tencent’s marketing campaign - digital codes that can be redeemed for virtual items in online games. Officers said the accused impersonators were hoping to re-sell these codes for profit. 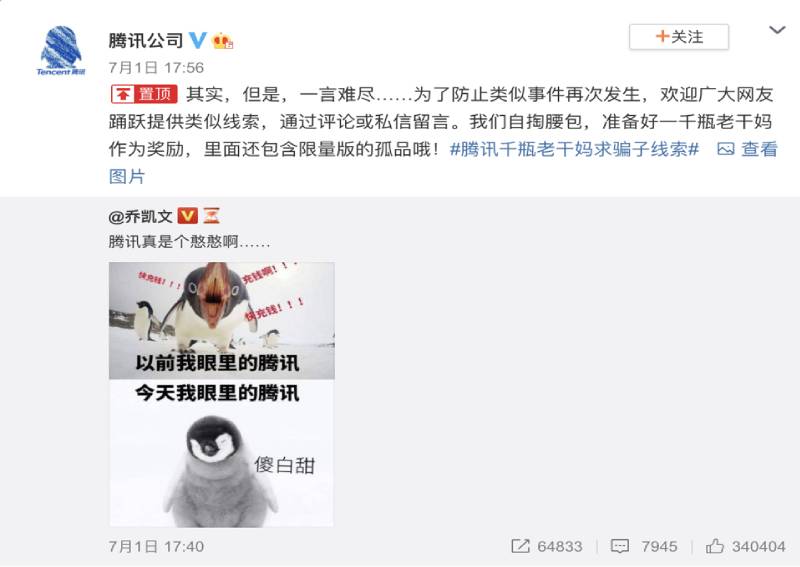 Tencent has been sharing memes making fun of itself in the wake of the Lao Gan Ma scam. PHOTO: Weibo

Lao Gan Ma, which translates as “old godmother,” is a household name in China.

The brand started in 1996 as a 40-person workshop set up by widowed Guizhou province native Tao Huabi at the age of 50. It now sells hundreds of millions of dollars worth of chilli sauce around the world, earning loyal fans like John Cena.

The American wrestling star has repeatedly professed his love for the spicy condiment using Mandarin in a series of videos posted to Weibo.