A swarm of monster bugs are running toward towards me and I'm frantically shooting at them, all while trying to ignore the fact that I'm standing right at the edge of a skyscraper. As someone with acrophobia, this is the stuff of nightmares.

Except I wasn't just having a bad dream - I was in the middle of a Sandbox VR game called Amber Sky 2088, perched on top of a tall building, shooting at hostile creatures trying to take over the earth. Lucky for me, my game partner Steve Zhao had already been through this hundreds of times - he instructed me to hold up my shield as he calmly obliterated the enemy one by one.

But instead of creating consumer VR games like those for a Playstation VR console, for example, Sandbox is one of a few companies in the world that specialises in creating location-based VR games - which means players go to a bricks-and-mortar location to experience a game instead of playing it at home.

Walk into any of Sandbox VR's seven locations around Asia and North America, and you'll find the same set-up: a room painted entirely green, with haptic vests, backpack computers and sensors that gamers strap onto their wrists so that motion trackers can capture each player's movements in the game.

Unlike typical consumer VR games which are hooked up to a computer or similar processing unit, Sandbox's powerful backpack computers mean that graphics are much higher definition and this minimises the possibility of its players getting motion sickness. 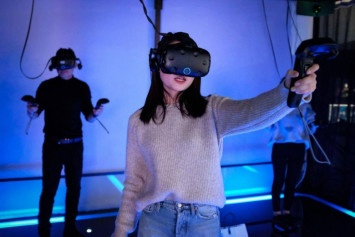 The company has so far raised US$68 million from investors including Andreessen Horowitz and Alibaba Group, the parent company of the South China Morning Post. Rap superstar Kanye West has also tried the game, even posting about it on social media after.

"Kanye came out and he was like, 'oh man, let's see how we can work together'," said Zhao. "I think for him he saw this as a medium of expression … it's a medium that hasn't been [explored] before and he got very excited about the possibilities."

The interest surrounding virtual reality reached a peak in 2014, when Facebook announced it would acquire Oculus, a California VR headset maker, in a US$2 billion deal.

That spurred investors to take the technology more seriously and spawned thousands of start-ups.

But entrepreneurs and investors underestimated how long it would take consumers to embrace expensive VR headsets and although cheaper headsets are now available, sales still lag far behind voice-enabled smart speakers and other emerging devices.

Sandbox VR is one of several technology companies experimenting with location-based VR gaming. 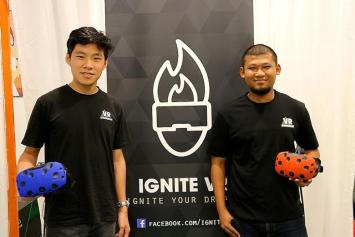 Its rivals include The Void, a US mixed reality entertainment firm that has partnered with Disney to create VR games around films like Star Wars, as well as Steven Spielberg-backed Dreamscape Immersive, which offers narrative-driven experiences instead of games.

Zhao's decision to build Sandbox VR came when he first tried VR technology in 2014, just as the first Oculus VR headsets had been shipped.

"The first time I experienced VR [in 2014], it was with the first Oculus developer kit and everything was very basic at that time," said Zhao in an interview. "And I thought, man, VR sucks."

"Later on, I tried [other] consumer VR and it was not really fun. We've been building games a long time and it's all about immersion, but how can you be immersed in VR when you really can't even see your full body?"

Zhao, who had spent nearly a decade developing PC games at his previous start-up Blue Tea Games, decided to bet his life savings to help fulfil his vision of what he thought virtual reality should be - a fully-immersive experience that allows players to be transported to another reality, much like the Holodeck from Star Trek.

With a small team, Zhao created Deadwood Mansion - a game where players are SWAT team members fending for themselves in a dark, zombie-infested mansion.

"Zombies had mass appeal, and we could build something like that in three to four months," said Zhao. "We also made the mansion super dark cause when it's dark, you don't have to spend a lot of time on art."

He also decided to make all players members of a SWAT unit because everyone could look virtually identical, and be distinguished via colour codes.

Within three to four months, the Sandbox team had a working demo. Zhao knew they had a hit on their hands when a friend's wife came to try the game for herself - and could not stop screaming.

"We actually had neighbours come down and knock on our door to ask if everything was OK," he said.

Some people who tried the game were so terrified by how realistic everything felt that they yanked the headset off to get out of the game, according to Zhao. 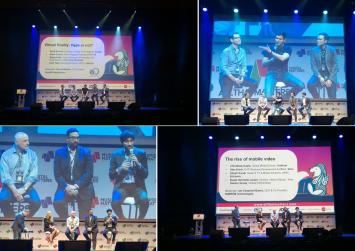 "And that's when I realised that we had something," he said.

Sandbox VR then opened for business, renting out a small storefront in a decrepit building in Hong Kong's bustling Causeway Bay shopping district.

Response was lukewarm at first, with a sprinkling of bookings - but one day, a social media video of the company's game went viral.

"One day, I remember it was 11am, and the phone wouldn't stop ringing," said Zhao. "It turned out one of the social media posts of us went viral and was shared over 10,000 times and seen by over 1.7 million people."

At the time, the company only opened bookings for two weeks ahead. In just a couple of hours, all the slots were booked out. Soon, Sandbox found that they were booked for the next three months solid.

"That's when we thought, wow, we have something really rare in the start-up world - we have a product-market fit."

Sandbox currently offers three games in its repertoire - the zombie mansion experience, a pirate-themed game and the sci-fi, futuristic game I tried.

The company is now working on several new concepts, and is exploring the option of licensing third party IP to create new VR games as well as games where players can fight each other in the VR realm - think Street Fighter, but in virtual reality.

"It's really awesome because this product, this piece of content, would have never existed before [Sandbox VR]," said Zhao. "So we're just really excited to see how people respond to it."