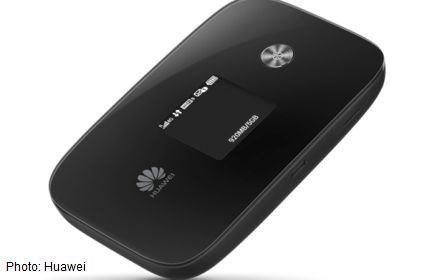 Two months after rolling out the first commercial 300Mbps 4G service in Singapore, SingTel's customers can finally enjoy the ultra-fast mobile speeds with the launch of the Huawei E5786 mobile MiFi device.

Available tomorrow from SingTel's retail outlets and online shop, the E5786 MiFi device is priced at S$399 without line contract and inclusive of GST. Alternatively, customers can purchase the MiFi device at S$168 with a 24-month mobile broadband plan.

According to Huawei, the E5786 MiFi can last for more than 10 hours on a single charge with its 3,000mAh battery. It also doubles as a battery bank which you can use to charge other mobile devices. It is fairly portable at less than 155g. You can find out more about the device on Huawei's website.

SingTel also states that other LTE-Advanced devices including smartphones and tablets, will be available in the coming months. This hints that there is a possibility that the recently announced LG G3 LTE-A and Samsung Galaxy S5 LTE-A will eventually make their way beyond the South Korean market.

The telco also reiterated the fact that all its 4G customers with compatible devices will be able to enjoy the 300Mbps service at no extra charge. It is currently expanding its LTE-Advanced network for indoor and outdoor locations.

Changi Airport, Singapore Expo and the area around Bugis MRT Station are the only areas that have LTE-Advanced coverage at the moment. By end of next month, the coverage will be expanded to cover the CBD, Orchard, Shenton Way and City Hall areas. More than half of the island is expected to be covered by end October with nationwide coverage slated for the end of Q1 2015. M1 and StarHub also have plans to upgrade their networks to support 300Mbps 4G service.