Honor CEO George Zhao unveils the new Magic 3 flagship smartphones running on Qualcomm Snapdragon chips on Thursday. Zhao responded to a question about US lawmakers trying to blacklist the brand, saying Honor’s problems would be solved if it continues to do well.

Chinese smartphone maker Honor has said it will do what it can to maintain momentum in the face of threats from the US to add the company to the same trade blacklist that forced its former parent Huawei Technologies Co to sell the budget brand to a consortium of partners last year.

During the Thursday launch event for the Magic 3 series, the brand’s first post-Huawei flagship smartphones, CEO George Zhao Ming responded to media questions about the 14 members of the US House of Representatives who urged the country’s Department of Commerce to add Honor to the US Entity List .

“We believe that if we keep on doing well in what we do that all these problems can be solved,” Zhao told Chinese media at the event. He also emphasised that Honor is now an independent company that is no longer involved with Huawei.

Honor has been fighting hard to sever ties with its former parent in recent months in an effort to restore relationships with Western component suppliers such as US chip maker Qualcomm. At the launch of the Magic 3 series, the chip maker’s newly appointed CEO Cristiano Amon made comments via a pre-recorded video in support of the new phones. The Magic 3 runs on Qualcomm’s Snapdragon 888 chipset, while the Magic 3 Pro and the Magic 3 Pro Plus use the Snapdragon 888 Plus.

In May 2019, the US Commerce Department added Shenzhen-based Huawei to its Entity List , effectively blocking the telecoms equipment maker from doing business with American companies. Restrictions were further tightened last year that made it even harder for Huawei to acquire advanced chips made with US-origin technology. By November, Huawei had sold off its rising Honor brand to spare it from the sanctions.

Even before Huawei’s divestment, Honor had been trying to move up market and shed its budget-brand image. The Magic 3 series marks the brand’s most ambitious foray into the high-end smartphone segment, with prices as high as 7,999 yuan (S$1,676).

Honor also said the new phone will be the first powered by a Snapdragon chip to support a digital yuan hardware wallet, meaning private encryption keys are protected by the chipset. China is currently running trials for its central bank digital currency , which is expected to eventually gain widespread usage.

As an independent company, Honor is expected to focus on filling the vacuum left by Huawei’s retreat in the smartphone market, according to analysts, which rival Xiaomi has already been capitalising on this year . Honor’s biggest advantage at home, though, may be its relationships with government enterprises. 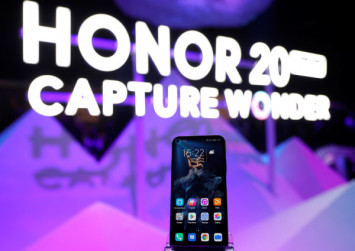 “The future for Honor in China is very bright. As it is expanding into high-end phones, Honor now has a great window of opportunity to seize the sales to government enterprises,” said Nicole Peng, vice-president of mobility at Canalys. “Huawei previously leaned heavily on sales to government enterprises. Xiaomi, Oppo and Vivo never focused on that part of the market.”

Honor became China’s fifth-largest smartphone brand by shipments for the first time in the second quarter, growing 40 per cent quarter over quarter to take 9 per cent of the market, according to market research firm Canalys. Huawei fell out of the top five for the first time in seven years. Vivo and Oppo, both owned by Dongguan-based BBK Electronics, remained the top two brands in the country with 24 per cent and 21 per cent market share, respectively. Xiaomi was third with 17 per cent and Apple came in fourth at 10 per cent.

Created in 2013, Honor was the unsung hero that helped Huawei overtake Apple and Samsung Electronics at home, competing with budget-friendly rivals by offering trendy smartphones with prices between US$150 (S$204) and US$220. By last year, the brand had more than 200 million users worldwide.

When Huawei was first sanctioned by the US, Honor sales took a hit. After becoming a separate company, the brand’s market share in China fell to 3 per cent in the beginning of the year before rebounding in the second quarter, according to a report from CINNO Research.