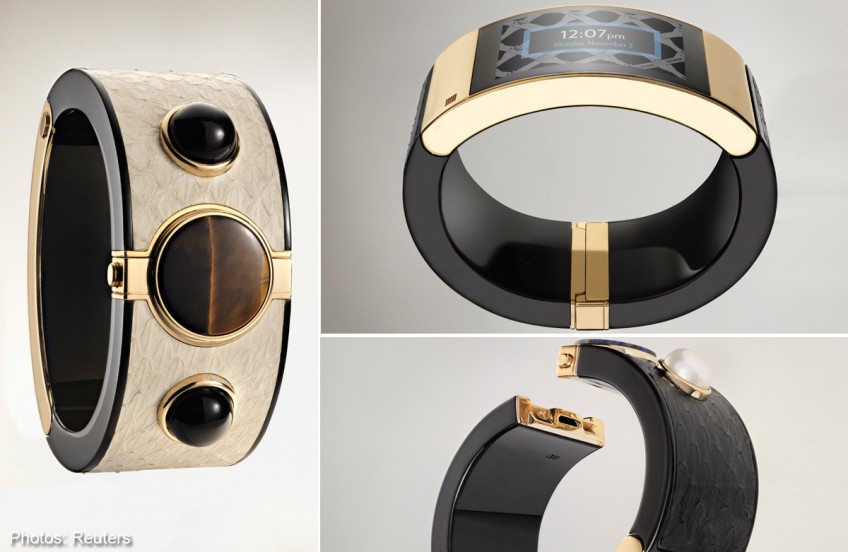 SAN FRANCISCO - Upcoming bracelets with technology from Intel Corp and design cues from fashion brand Opening Ceremony will connect the wearer with Facebook, Google and Yelp via an AT&T data plan without having to carry a smartphone.

Called My Intelligent Communication Accessory, or MICA, the snakeskin bracelets are aimed at fashion-conscious women and are an attempt by the two companies to stand out in a growing field of often-clunky smartwatches and fitness brands that have yet to catch on widely with consumers.

"We really approached this first and foremost about why would a woman want to wear this everyday, and how can it be incorporated into her wardrobe," Humberto Leon, creative director at Opening Ceremony, said in a phone interview last week.

As well as lapis stones, obsidian and an 18k gold coating, the devices include a sapphire curved screen on the inside of the wrist that displays text messages, calendar items and events from Google and Facebook, and recommendations of nearby restaurants and stores from Yelp.

After Intel was late to smartphones and tablets in recent years, Chief Executive Brian Krzanich has been determined to make sure the top chipmaker is at the forefront of future trends in mobile computing.

Krzanich gave the green light for the chipmaker to develop the bracelet with Opening Ceremony after his wife wore a prototype for several days and liked it, he recently said.

Incoming alerts discreetly vibrate the bracelet instead of making a noise. Its US$495 (S$642) price tag includes a two-year data plan with AT&T, which means it does not rely on a smartphone for connectivity, as do most smartwatches, the companies said in a press release on Monday.

As well as working with Opening Ceremony, Intel in March bought fitness bracelet maker Basis Science and it has teamed up with watch retailer Fossil Group to develop other wearable computing devices.

The bracelets, which Intel says have a battery life up to two days, will be sold starting by early December through Opening Ceremony and Barney's upscale department stores.