The government has moved to slow down the uploading and downloading of photographs on social media platforms and online messaging apps following the rioting in Central and West Jakarta on Wednesday.

"To avoid incitement and false news from spreading to the wider public, we are temporarily limiting access to certain features on social media," Coordinating Political, Legal and Security Affairs Minister Wiranto said at a press conference on Wednesday.

At around 12.15pm, several users shared on Twitter that they were experiencing difficulties while accessing the applications from computers or mobile phones.

As a result, hashtags #WhatsAppdown and #Instagramdown are currently trending in Indonesia.

Me : "What happen with instagram? Is instagram down? I bet, whatsapp will get down too!"
A few mins later i was sent a text to my bf and... pending-.-
So, i m checking my twitter immediately🤣#instagramdown#WhatsAppDown

#whatsappdown #instagramdown
everyone : *back to twitter and complain about it*
twitter : am i a joke to you?

"The limitations are applied to features on social media platforms and messaging systems," Rudiantara said at the same press conference. "We know that the modus operandi [of spreading false news] is by posting videos, memes and photos on Facebook, Instagram and Twitter. These posts are screen-captured and go viral on messaging apps such as WhatsApp. So, we will all experience a slowdown if we try to download or upload videos and photos." 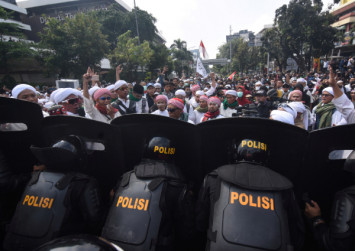 He said that the move was necessary because fake videos and photos triggered an "emotional response."

He added that taking down the false news instead of limiting access altogether would be ineffective given the tens of millions of social media and WhatsApp users in Indonesia.

He emphasised that the measures would be temporary, but did not say when the limits would be lifted.

Meanwhile, in an official press release received Wednesday afternoon, the Communications and Information Ministry called on netizens to refrain from spreading violence-related content and hate speech via social media.

The ministry reminded the public that sharing videos containing violence, provocative incitement and hateful messages based on ethnicity, religion, race and societal groups was forbidden by the Electronic Information and Transactions Law.

The ministry also emphasised that it was continuously monitoring websites, web content and accounts with AIS technology supported by 100 verifiers and that it was also collaborating with the police to track down and identify accounts spreading negative and provocative content.