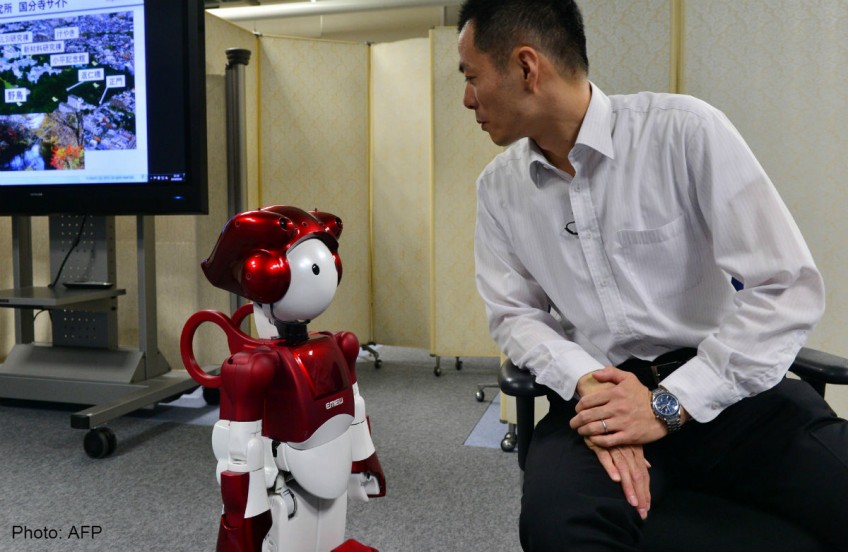 An employee of Japanese electronics giant Hitachi talks with the company's humanoid robot "Emiew 2" (Excellent Mobility and Interactive Existence as Workmate) during a demonstration at the company's central laboratory in Tokyo.

TOKYO - A future in which it is difficult to tell man and machine apart could soon become reality, scientists say, after recent robotic breakthroughs in Japan.

But as the once-fantastical idea of wise-cracking android sidekicks takes form in laboratories - and the gap between humans and robots narrows - society faces ethical and legal complications as yet undreamed of, they warn.

Science fiction's rapid slide towards science fact owes much to the likes of Ishiguro, who has an android copy of himself that he sends on overseas business trips in his place.

"It saves me time," he smiled. "The upper torso and lower torso you can pack in two big suitcases. The head is very fragile - it goes as carry-on baggage."

Robots already perform a wide variety of tasks in Japan: they cook noodles, help patients undergo physiotherapy and have been used in the clean-up after the 2011 nuclear meltdown at Fukushima.

One day, predict future-gazers, robots will perform all kinds of household chores, monitor the sick, and even serve up cappuccinos.

Ishiguro created his doppelgänger from powerful electronics, complex moving parts, silicone rubber and hair from his own scalp.

"If we have enough knowledge about humans, we can create more human-like robots," he said after unveiling last month what he claimed was the world's first news-reading android in Tokyo. "That knowledge usually comes from neuroscience or cognitive science.

"More important is robots and androids as a mirror to reflect humanity. Once we become friends, the boundary between human and robot disappears," added Ishiguro, a professor at Osaka University.

The blurring of that line has long been a source of worry for humanity, as often depicted in popular culture.

The 1982 Hollywood cult film "Blade Runner", which is set in 2019, features genetically engineered robots called 'replicants' which are visually indistinguishable from humans, but physically superior and able to withstand pain.

The film's protagonist, played by Harrison Ford, is given the task of tracking down and killing replicants that have escaped and are living among us. His problem is knowing the difference.

More recently, Hollywood broached the possibility of falling in love with technology in the critically acclaimed movie "Her".

Released 2013 and set in the not too distant future, the film tells the story of an introverted loner, played by Joaquin Phoenix, who falls for an intelligent operating system that exists only as a female voice on his computer and mobile devices.

Today robots are still discernably robots, with many designed deliberately to look artificial - Honda's ASIMO was introduced to much fanfare in 2000 as a multi-functional mobile assistant which resembles a shrunken spaceman.

A chatty humanoid called Pepper was unveiled recently by Japanese mobile carrier SoftBank, which claims it can understand people's emotions and "70-80 per cent of spontaneous conversations".

Pepper, which will go on sale to the general public in February for $2,000, has humanoid features - like a head and two arms - but its white plastic body deliberately points up its artificiality.

Japanese roboticist Masahiro Mori suggested that the more robots look like people, the more we find them creepy, a phenomenon he called the "uncanny valley".

Ishiguro's initial human android, based on his own daughter, reduced her to tears, but he insisted Mori's phenomenon no longer applied after perfecting the template.

"The first android's movement was jerky, like a zombie," said Ishiguro. "But we have overcome the uncanny valley."

Research by Japan's National Institute of Advanced Industrial Science and Technology (AIST) bears that out. They tested reactions to androids in hospitals with largely positive results.

"We used androids in sessions with children suffering from ASD (autism spectrum disorder)," said Yoshio Matsumoto, research leader in service robots at AIST. "Of 85 subjects, four said they thought the robots were scary." Ishiguro foresees that just as younger people today are attached to their mobile phones - in reality powerful computers that mediate much of their lives - androids will one day become an indivisible part of our landscape.

"Everyone is going to have an android," he predicted. "Handicapped people need another body. We are going to have more choices." He also believes the floodgates to deepening relationships with robots will open once Pepper goes on sale and people take 'him' into their hearts.

But, he says, that is where the moral problems will arise.

"As we become closer to androids, we could hesitate to pull the switch," he said.

"Suppose you lost your daughter in a traffic accident, and I create her android. You will probably love the android, and accept it as a human.

"Suppose someone burgles your house and you kill them to protect the robot. What kind of discussion will the lawyers have in court?"