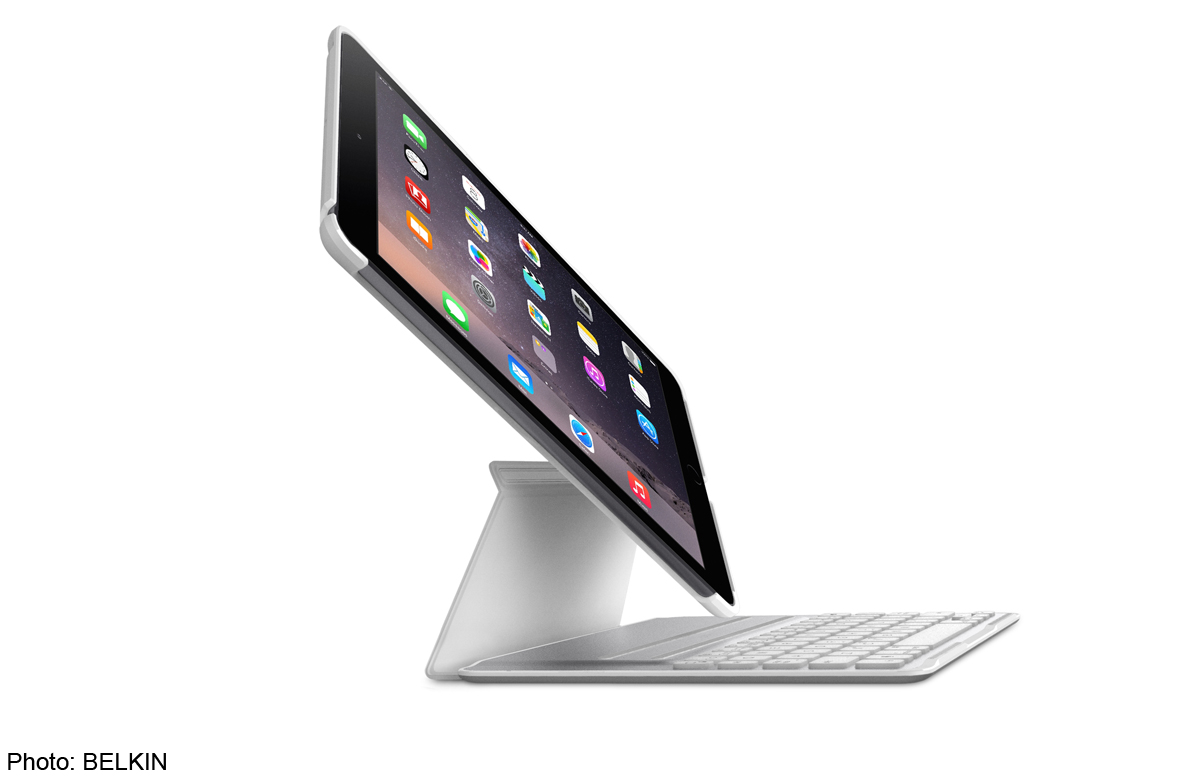 The Belkin Qode Ultimate Pro Keyboard Case for iPad Air 2 is actually an Apple iPad Air 2 case with a Bluetooth keyboard that doubles as a cover. This way, both the tablet's front and back are protected.

It is available in black and white (version tested).

The aluminium keyboard has backlit keys with three levels of brightness. It can connect to two Bluetooth devices (iOS or Mac) at the same time.

A micro-USB port at the back is for charging the battery. A full charge is supposed to last a year, even with continuous use.

Also at the back is a flap with a built-in magnetic strip which connects to the case's rear magnetic strips - vertical and horizontal.

So you slot your iPad into the sturdy but rather thick case, connect the case to the flap with the magnetic strips, and close the case to put the iPad to sleep. Open it and it will automatically wake the iPad.

If you are just reading, you may want to disconnect the case from the flap. The case has an opening on the left side, which allows you to use Apple's Smart Cover.

Two long magnetic strips behind the keyboard let you prop up the tablet with a 60-degree or 70-degree viewing angle, with the flap acting as support. The same magnetic strips let you change the orientation of the tablet from landscape to portrait.

The downside: The connection between the flap and case is quite loose and gets disconnected easily. So you need to take care when using the device with the case on your lap.

The backlight is bright and makes the keys easy to see. But in daylight, the white keys can be hard to read against a white surface. They also pick up dirt and scuff marks easily.

The keys are well spaced out and work almost like an Apple keyboard except that the Function and media-control keys are combined with the row of numeric keys. Key travel is not too deep but has enough tactile response for comfortable typing.

The keyboard can be paired with another Bluetooth device, say your iPhone. To toggle between the iPad and iPhone, just press the Function key and the Plus/Minus key.

All these features come with a hefty price tag. At $269, this is nearly twice the cost of Logitech's Ultrathin Keyboard Cover and $70 more than the Zagg Slim Book. 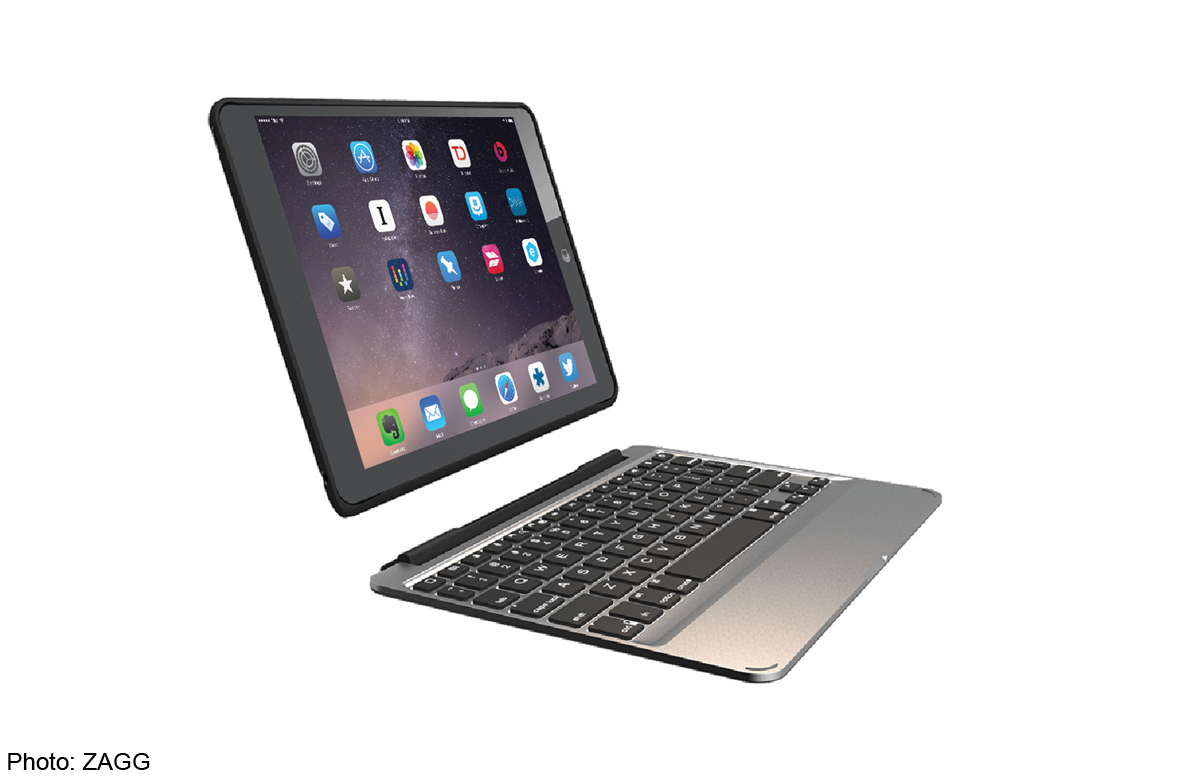 The Zagg Slim Book for iPad Air 2 consists of a thin plastic case and an aluminium-clad Bluetooth keyboard that acts as a cover.

So, like its Belkin counterpart in this round-up, the Slim Book is able to protect the front and rear of your iPad Air 2.

The plastic case is a bit flimsy but then, it is really light and thin.

Slotting your iPad Air 2 into the case is a breeze. You dock the case into the hinge's groove at the rear (keys facing you) of the keyboard cover.

A magnetic connection inside the groove secures it in place.

The hinge can swivel up to 135 degrees. So, you can have a viewing angle of up to 65 degrees when you dock the iPad with the case.

You can also dock the iPad case in reverse and use the hinge as a stand to watch videos.

I find the hinge to be quite stiff when you want to adjust the angle. In addition, it takes some force to prise the case off the hinge. But it means you can use it on your lap without worrying that the case will slip out.

When the case is closed, the overall thickness is only 1.5cm. With the case fitted to the iPad Air 2, the whole set-up weighs around 950g. This makes it easy to carry around.

The Bluetooth keyboard has black keys on a nice aluminium interior. The rear is of a black plastic with rubber feet to keep the case from sliding around.

If you use a space-grey iPad Air 2, the overall design looks like a mini-MacBook Pro.

On the right edge of the keyboard is a micro-USB port for charging the built-in battery. It is supposed to last for two years if you use it for an average of one hour a day.

The keyboard's backlight is not as adjustable or as bright as its Belkin counterpart. But it works well enough in the dark.

Unlike in the other keyboards in this round-up, the Zagg Slim Book's keys are really close to the hinge as there is no groove or magnetic strips behind the keys.

There is a space in front of the keys that functions as a palm rest.

The matte texture of the keys makes it pleasant to type on. The keys are responsive and have great feedback.

As this is a full-sized keyboard, the layout is close to that of Apple keyboards, with keys well spaced out.

So, typing on this keyboard is intuitive and comfortable. In fact, there are times I find myself trying to use the "trackpad" on the palm rest because it works so much like a laptop. 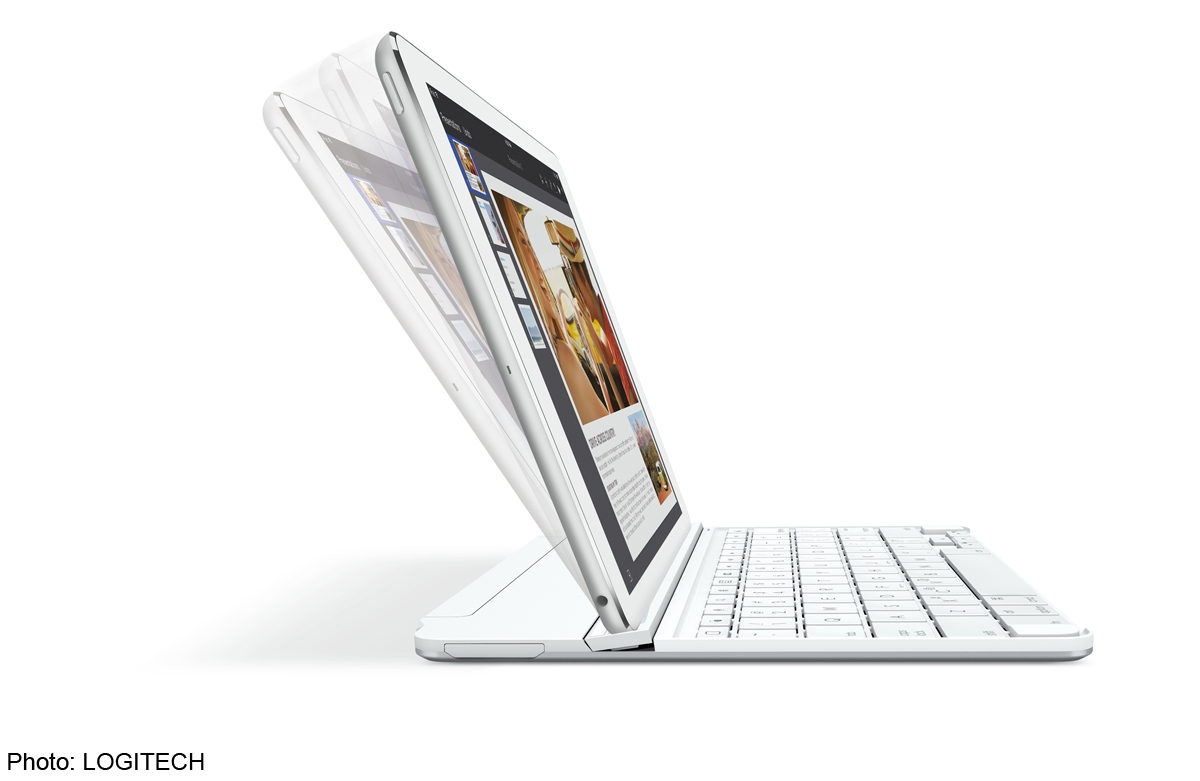 Unlike other keyboards in this round-up, the Logitech Ultrathin Keyboard Cover for iPad Air 2 protects only the tablet's screen but not its back.

As I have got into the habit of layering a protective skin on my iPad's back, this Bluetooth keyboard cover should be perfect for keeping the weight down.

The keyboard cover attaches to your tablet via a magnetic hinge like Apple's Smart Cover.

It automatically wakes your iPad when opened and puts it to sleep when closed.

The magnetic hinge has been redesigned. Now, the hinge rests hidden on the cover when not in use.

You slide in the iPad at an angle of about 30 degrees and the hinge pops up. While this does work, I find the new magnetic hinge not as secure as the older hinges.

It managed to detach itself from my iPad while in the iPad sleeve of my backpack.

On the inside of the cover is a full-sized keyboard with a magnetic groove behind it.

Older versions had a fixed groove, but the new one can be adjusted to change the viewing angle from 60 degrees to 70 degrees.

The iPad Air 2 can be magnetically secured in the groove, but only in landscape orientation. But I find that the connection is not really stable, especially when you sit it on your lap to type.

I prefer the fixed groove of earlier models as I think the fixed 60-degree viewing angle is perfect for typing with the keyboard. Also, the connection was more secure.

Thankfully, the full-sized keyboard remains easy to use. The layout is familiar to frequent users of Apple keyboards. The keys are well spaced, responsive and have a nice tactile feel. It is almost as good as typing on a conventional keyboard.

On the downside, the keys are not backlit and the numbers and characters on the keys seem flimsy, as if they might peel off after prolonged use.

Weighing only 327g and measuring just 6.4mm thick, the Logitech is about 110g lighter but 0.3mm thicker than the iPad Air 2.

The aluminium cover comes in space grey (with black keyboard) and silver (with white keyboard, version tested). Both colours complement the look of the tablet.

However, there is no gold version.

The keyboard cover is powered by two lithium coin batteries. The battery is supposed to last two years - if you use it for no more than two hours a day.

I would prefer a built-in battery that can be recharged via a micro-USB cable, though.

Even though I like putting a protective skin on the back of my iPad, the redesigned Logitech Ultrathin Keyboard Cover does not sit well with me.

The Belkin Qode Ultimate Pro Keyboard Case may have all the bells and whistles, but it is expensive.

My choice will be the Zagg Slim Book, as it ticks all the right boxes in terms of usability, pricing and design.

This article was first published on Apr 9, 2015. Get a copy of Digital Life, The Straits Times or go to straitstimes.com for more stories.