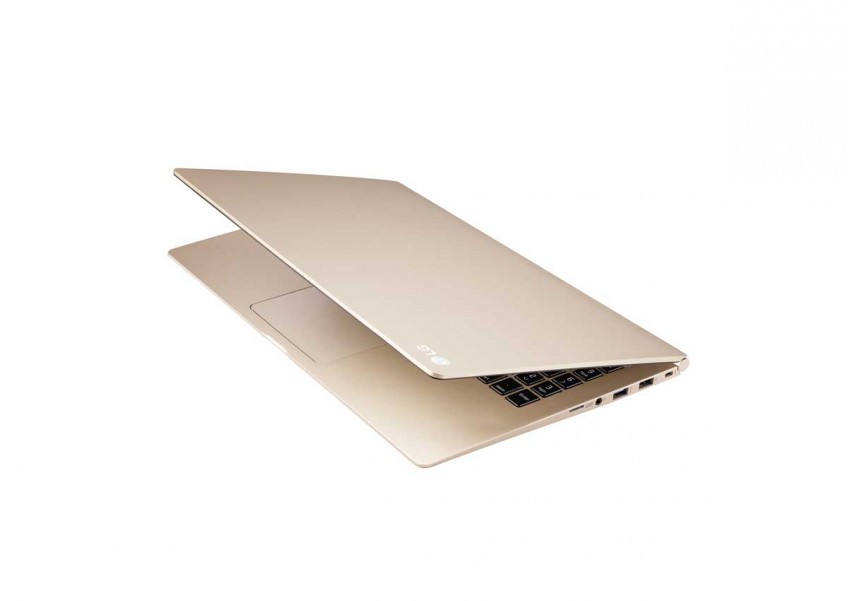 The LG gram’s weight is all the more remarkable since it has a 15-inch screen. By comparison, the 12-inch Apple MacBook is 60g lighter.
LG

After a three-year hiatus from the local IT scene, LG has returned with the gram, an ultra-thin laptop that gets its name from its weight.

Or, rather, from its lack of heft. The gram weighs a mere 980g, which is all the more remarkable since it has a 15-inch screen. For comparison's sake, the equally svelte 12-inch Apple MacBook weighs 920g.

The gram's lightweight design is because of its magnesium alloy chassis. This chassis does not feel as sturdy as a laptop with a unibody aluminium frame. The lid wobbles if you twist it while holding it by its two sides.

The keyboard, too, flexes in the middle if you exert a slight amount of pressure.

But I was more disappointed by the lack of a backlight. Key travel is predictably shallow, though the 15-inch chassis allows for a numeric keypad on the right.

Looks-wise, the gold-coloured laptop follows the usual ultrabook design of a slim, tapering body. With the exception of a small LG logo at the corner of the lid, it is free of other embellishment.

The matte surface of the laptop feels a bit like sandpaper, but not as rough.

The gram sports a 1,920 x 1,080-pixel glossy screen with an in-plane switching panel. It is not a touchscreen.

Viewing angles are good with just a bit of colour shift at the sides. However, the screen's pixel count is on the low side compared with the ultra-high-resolution displays on premium laptops.

Like some of the newer laptops I have seen this year, the gram has a very thin bezel. Hence, the top of the screen is too narrow to fit a Web camera. Instead, the camera is located below the bottom bezel at the laptop hinge.

Included with my review set is a USB Type-C to Ethernet adapter, which is useful for when I need faster speeds than Wi-Fi. The laptop also has three other full-size USB ports and an HDMI port.

Preloaded in the laptop are a number of proprietary LG apps. The LG Control Center lets you adjust frequently used settings such as the screen brightness and volume, along with security settings like the firewall and user account.

I personally do not find this app useful as I am familiar with these settings in Windows 10. Many of these settings, like toggling the Wi-Fi feature, are also available as keyboard shortcuts (Function key row).

In our video-loop battery test, the gram lasted 4hr 40 min. This is comparable to the 4.5hr managed by the Dell XPS 15.

My $2,199 review set comes with the top hardware configuration. It has an Intel Core i7 notebook chip with 8GB of memory and a 512GB solid-state drive. It posted a PCMark 8 Home score of 2,589. So, performance-wise, the gram is on a par with other laptops with similar configurations.

Expect it to perform well for office productivity tasks, but the gram's lack of a dedicated graphics chip makes it less suitable for video and photo editing.

LG also sells a 14-inch version of this laptop that surprisingly weighs the same as the 15-inch model. The laptop will be available from the middle of next month.