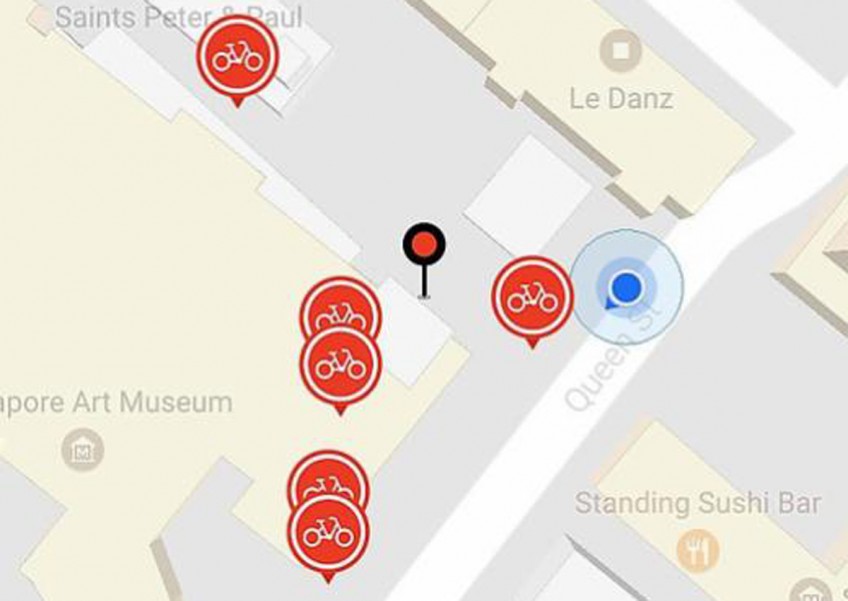 The Mobike app indicated that the bikes were inside the Singapore Art Museum when the TNP team was there yesterday.
The New Paper

Two days after its formal launch in Singapore, Chinese-owned bike-sharing app Mobike still has some major issues to iron out.

Eight out of 10 times, those who tried Mobike could not find the bicycle.

The team combed areas like Tampines, Clarke Quay, Bras Basah and Kallang, and while the app indicated the bikes were at spaces like MRT stations and along pavements, they would be missing from these locations, even after a "reservation" had been made on the app.

Some of the bike icons on the app would even indicate the bicycles were inside private residences, hospitals, storerooms and construction areas.

Although the TNP team managed to find a Mobike at Tampines and Kallang Leisure Park, the bike icon on the app showed it was a distance away from where the two bicycles were supposed to be located.

Mobike uses a dockless bike-share system and users can unlock its bicycles by scanning a QR code on it.

In response to TNP queries, Mr Florian Bohnert, head of international expansion at Mobike, said: "If the bike icons are not showing up correctly, we advise users to look around their surroundings and across the streets to locate the bikes, as the marker on the map may be affected by the surrounding environment such as buildings and other possible obstructions affecting the accuracy of the GPS signal on the map view."

A spokesman said the company has more than a million bikes in operation. As it can monitor the location and health of Mobikes in real time, "the number of bikes that are lost or damaged is negligible".

He added: "When necessary we can intervene, for example when a bike is damaged or parked in an unsuitable location."

Mobike had a team studying the local market to prepare for its launch from last October and have ramped up the deployment since Tuesday's launch.

There were similar struggles with China-based ofo, which does not use a GPS system. Users would have to find a bike and enter the bike number in the app.

It will return a combination code which can be used to release the lock on the bike.

The New Paper team searched various MRT stations from the heartlands to the CBD area, parks and Housing Board void decks, but none of ofo's bright yellow bikes were spotted.

Based on the team's two-day mission, local venture oBike seems to have the least issues.

Bicycles from oBike could easily be found, with many parked at various MRT stations.

Unlike Mobike, oBike tracks its bicycles through the GPS system on the user's app, and a bicycle was found at the first attempt, near the McDonald's outlet at Bishan-Ang Mo Kio Park.