The Armed Forces chief said the drones could not cover the whole of the country, but will focus on the 12 hotspot areas.

"We will also target locations where people are still stubborn (in complying with the MCO).

"We hope the use of the drones can enable a more efficient patrol and monitoring of the people during the MCO," he told reporters after attending a demonstration of the drone capabilities, which was attended by Inspector-General of Police Tan Sri Abdul Hamid Bador.

While not disclosing the exact number of drones that will be used, Jen Affendi said some are government assets while some are lent by local industry.

"The drones are able to record live footage. We will also be able to identify those captured in the footage.

"If and when needed, personnel will also be deployed at certain locations (after footage is captured)," he added.

The drones can operate between 40 minutes to an hour, Jen Affendi said.

"At a high populated area, it would be good enough if it can cover between 3km-5km radius.

"The MCO must reach its objective so that we can prevent Covid-19 from spreading.

"Best thing is for everyone to stay at home," he said.

The drones will be deployed based on suitability, he added. 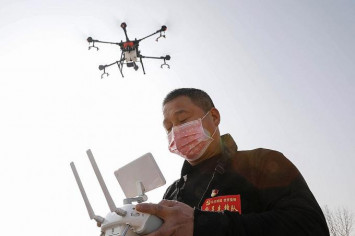 "If five military personnel are deployed, only one is armed with a weapon.

"Our enemy is not the people but its Covid-19.

"I am satisfied with the deployment of my men in assisting the police to enforce the MCO," he added.

On those who questioned the military presence, Jen Affendi said their role is to prevent the situation from worsening.

"Let's work together to stop the spread of the virus," Jen Affendi said.