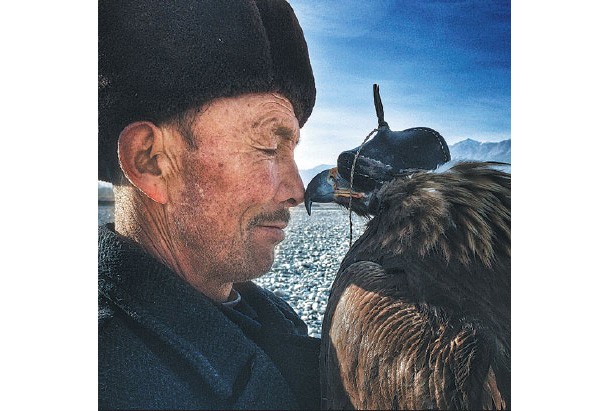 It's unlikely that Makanau Tumanbek, an eagle trainer living deep in the mountains of the Xinjiang Uygur autonomous region, knows that a picture of him gently nuzzling the beak of his eagle Red Eye has gone viral on the internet.

The photo, captured by Niu Siyuan with his iPhone 5s in southern Xinjiang's Kezilesu Kirgiz autonomous prefecture, won the grand prize in this year's iPhone Photography Awards contest on July 7.

Niu, 29, the first Chinese to ever win the grand prize of the annual IPPAwards, said, "Makanau's move was to calm down the startled eagle. I noticed the tough 61-year-old Kyrgyz man, who rarely smiles, suddenly became so soft with his eagle. Immediately, I took my phone out and took the picture. There was no time for me to think."

Makanau is among only a few people in China who still know how to train eagles to hunt for rabbits and foxes, a practice that is mainly a tradition of the Kirgiz and Kazak ethnic groups. The number of eagles allowed to be trained has been strictly controlled because they are protected animals in China.

Niu, a professional documentary cameraman and producer from Xinjiang's regional capital of Urumqi, is quite familiar with sophisticated digital cameras. However, he said the moment he captured, showing the connection between human and nature that deeply touched people around the world, could only be taken with his phone, because it is always in his pocket. Taking pictures with mobile phones is more of a gut reaction, he added.

"The thing with iPhone photography is that what you see is what you get. People can forget about photography techniques such as adjusting aperture and exposure. Most important, it is so accessible and easy to use, so people can feel free to record the most authentic moments," he said.

He made the remarks after his photo, titled The Man and the Eagle, was named grand prize winner at the IPPAwards.

It was selected from thousands of entries submitted by iPhone photographers from 139 countries.

Founded in 2007, the same year the iPhone was introduced, the IPPAwards pay tribute to the stunning imagery that can be captured with even the smallest and most unprofessional of cameras, reminding people that the person behind the lens plays a significant part in a good picture.

Niu began receiving systematic training in digital cameras in 2010 when he returned home after graduating from a university in Jiangxi province. Starting in 2012, he made it a habit to take photos in Xinjiang with his iPhone.

He believed it was Xinjiang's charming people and unique beauty that won the judges' hearts.

"I was born in Xinjiang and am deeply in love with it. So I want to show people what the massive land is really like and how diverse it is," he said. "A mobile phone is like a pen that I can write poems with."

For the IPPAwards, photographers are allowed to adjust the pictures with photo applications for iPhone. Niu said he used Snapseed and VSCO for the final touches. He said he hopes the iPhone will have a longer battery life in the future as the photography hardware and applications improve.

Niu will soon visit Makanau and tell him the good news in person. As for Red Eye, Makanau has already set him free to start his own family.