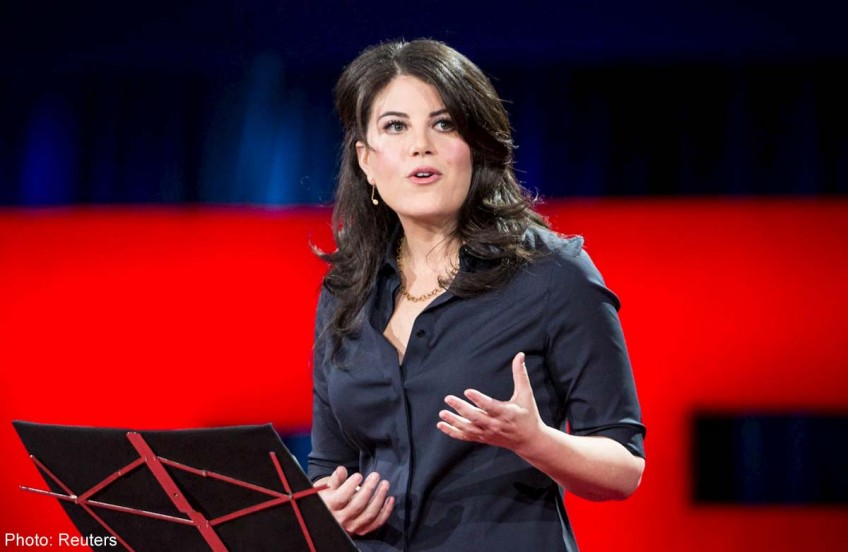 She spoke candidly of the humiliation she suffered due to a 1998 sex scandal with then US president Bill Clinton and said her reason for breaking years of silence had nothing to do with politics.

"It is time to stop tip-toeing around my past," Lewinsky said during an on-stage Ted talk during which, at moments, she welled with emotion.

The 41-year-old brunette recounted announcing her campaign to end online bullying at a Forbe's Under 30 summit in Philadelphia late last year, stepping back into the spotlight after about a decade of keeping low-profile.

She joked about being "hit on" that night by a 27-year-old man whose unsuccessful pick-up line was that he could make her feel like she was 22 years old again.

"I am probably the only person over 40 who does not want to be 22 again," Lewinsky quipped. She told of being 22 years old when she fell in love with Clinton, and then being two years older when the scandal broke. Few hands were raised when Lewinsky asked those at the prestigious gathering who among them didn't regret something they had done at that age.

She spoke of being swept up into a political, legal, and media maelstrom unlike anything seen before. Pictures and stories centred on the scandal were hot commodities online.

"This scandal was brought to you by the digital revolution," Lewinsky said. "This rush to judgement enabled by technology led to mobs of virtual stone throwers. I was branded as a tramp, tart, slut, whore, bimbo, and, of course, 'that woman'."

She said she was motivated to campaign against cyber-bullying by the 2010 suicide of an 18-year-old New Jersey freshman who was bullied online after being secretly filmed kissing another man.

"The landscape has become much more populated with incidents like mine, and now it is for public and private people," Lewinsky said.

"Millions of people, often anonymously, can stab you with their words," she said. "And, that is a lot of pain."

She noted high-profile hacks in the past year that resulted in embarrassing photos or messages being released, and rapaciously consumed, online.

"A marketplace has emerged when public humiliation is a commodity and shame is an industry," Lewinsky said. "The more shame, the more clicks. The more clicks, the more advertising dollars."

She urged an end to "shaming as a blood sport" by resorting to compassion and empathy instead of bullying and ridicule.

"Imagine walking a mile in someone else's headline," Lewinsky suggested at the close of a talk met with a standing ovation.

After news of the affair broke, Clinton was impeached by the House of Representatives in December 1998 but was acquitted by the Senate.

His wife Hillary, a former secretary of state widely tipped to run for president in 2016, says she has "moved on" from the scandal.

[[nid:106912]]
SUBSCRIBE TO OUR NEWSLETTER
Your daily good stuff - AsiaOne stories delivered straight to your inbox