Futurists have been promising us flying cars for quite some time and who can forget the imagery from movies like Blade Runner and The Fifth Element?

Those dreams are now closer to reality though, thanks to Guangzhou-based Ehang, which describes itself as the world's first electric passenger-grade autonomous aerial vehicle maker.

Ehang's mission statement is to "Let humankind fly freely like a bird" and its vehicles are already in use in China for aerial cinematography, photography and survey missions.

When offered the opportunity to take a test flight, I jumped at the chance, overcome with a mixture of emotions including fear, excitement, anxiety and as a Chinese person with a passion for technology - pride. 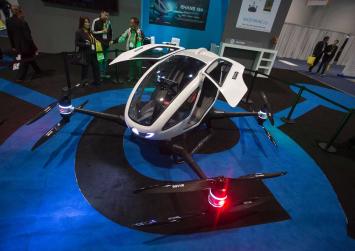 Ehang's test flight centre is based in a former national park in this southern corner of China, filled with greenery, trees and a beautiful lake, whose blue waters shimmered in the heat of the afternoon sun.

I was sweating and not just because of the humidity.

After exchanging casual chit-chat with Ehang representatives, my videographer colleague shouted out when Ehang's 216 flying car came into view. Although I'd first seen it at a Barcelona technology fair two years ago - I felt a pang of fear when I realised this small autonomous vehicle was about to take me 100 metres up into the air very soon.

The black-and-white aircraft was rolled into a take-off square in front of the main building, surrounded by several young engineers with clipboards. I felt like I was about to undergo a surgery-like experience.

I walked over and grabbed one of the young scientists. "Hi, if you're in charge of today's test can you please guarantee my safety?" I stammered. "I am an only child and my parents could not bear my death."

"Don't worry he said, I can guarantee your safety," he said. "You'll feel safer if you know how it works though. Have a chat with my colleagues over there."

I ran over to the engineers and asked them a bunch of nervous questions that I'd thoroughly prepared for the story but which now seemed like life-or-death issues.

They told me the aircraft was electric-powered and self-driving, meaning all I had to do was sit inside. The Ehang 216 has 16 separate electric motors, connected to 16 propeller blades.

"If any of the motors or propellers fail, others will adjust their rotor speed and make the aircraft stable and safe," the engineer said. "There has been no accident in over 200 passenger flights so far … It is safe and please enjoy your flight."

Suddenly the scientist shouted, "It's ready!"

It was at this point that I was asked to sign a waiver, which basically stated that Ehang could not be held responsible should anything happen to me during the flight. This did not do wonders for my state of mind.

I quickly signed it, realising that it was the only way I could test the vehicle and get my story. However, seeing that it was a 2-seater I tried to persuade my colleague to join me but he declined politely, saying he needed to get a shot from the ground.

I was strapped in and the propellers began to turn, quickly gathering speed. I gave a little scream as we took off but the ride was remarkably stable - if a little noisy. The vehicle ascended quickly.

I realised that giving a running commentary would not work so I decided to take in the view and take mental notes. The view was spectacular, with the cabin offering an almost 360-degree view.

I began to get comfortable and took my phone out of my pocket to take some pictures but then the craft started to rotate and descend, taking me by surprise. We were landing already, after only two minutes, and now I felt disappointed!

As the vehicle touched down I saw my colleague walking towards me, taking some shots. I waved my arms in the air enthusiastically, thinking 'I'm safe, I made it' before bumping my head on the window.

Although my palms were still sweaty, I felt mildly elated, I enjoyed the flight and would definitely do it again.

The future of flying cars has arrived thanks to technological breakthroughs, including improvements in battery efficiency and internet capacity. Self-driving aircraft also offers the potential to reduce human labour costs and the risk of human error.

According to Ehang, full commercialisation is on the horizon.

"Regulations are still under discussion but people take less time to accept new products now," said one of the Ehang scientists. "We expect to see a commercial line of flying cars in Guangzhou soon."

Although aviation has a long and difficult history - involving huge investment, constant innovation and some tragedy along the way, ultimately it is one of the world's safest and most efficient modes of transport. That's why there could be a bright future for passenger drones.