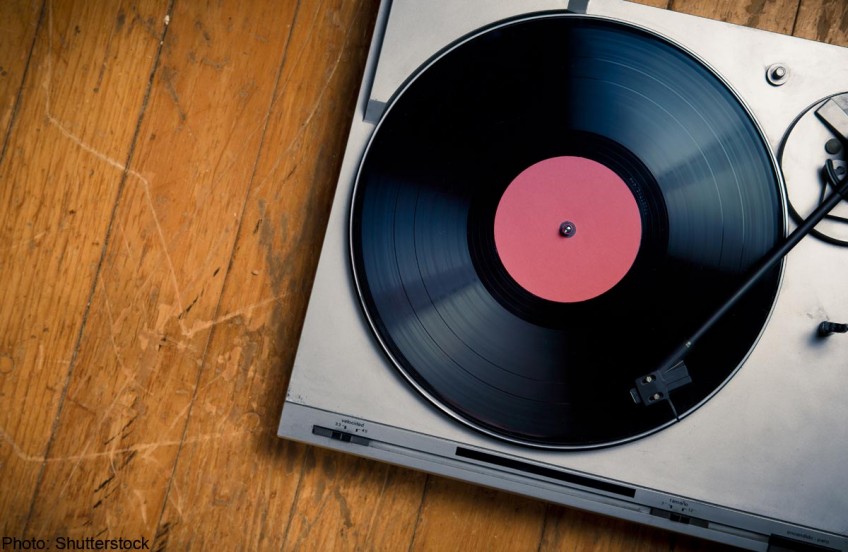 SINGAPORE - Vinyl-record aficionado, Mr Ong Boon Kiat, 45, has more than 500 records in his collection. The writer and lecturer listens to digital music like most people, enjoying the superior portability and convenience the digital format brings.

However, he refuses to part with his analogue music collection and continues to collect new records, despite the decades-old format's limitations.

The largest size of the vinyl LP (long-playing) records - a 12-inch disc - stores about 20 minutes of music on each side. Compare this with today's devices, which can store hundreds of songs in a fraction of the space, instantly ready to be played.

Vinyl's popularity plummeted in the mid-1980s as records were succeeded by audio cassette tapes, followed by compact discs (CDs).

This year, CD sales in the United States fell by almost 20 per cent to 62.9 million, from 78.2 million last year. With digital music dominating the music industry, CDs continue to lose ground.

By all accounts, vinyl should not even be in the picture. However, it refuses to go away, even showing signs of growth. Nielsen's annual mid-year report shows vinyl sales growing 40 per cent worldwide to four million, from 2.9 million sold in the same period last year. This makes vinyl the only physical music format which is still growing.

Vinyl enthusiasts such as Mr Ong sustain the industry. Naturally, vinyl has a much smaller share of the market, but its growth rate is matched only by music-streaming services.

Streaming grew by 42 per cent this year, with more than 70 billion songs played in the first half of the year, compared with 49.5 billion in the same period last year.

The reason for vinyl's recent resurgence is not easily determined, but those in the business here think that 2011 was a breakthrough year.

Mr Richard Wan, owner of Roxy Disc House, said: "Business picked up around 2011, as there were also a few shops which recently opened." Around that time, record shops, such as For The Record and House of Turntables, opened here and several articles on vinyl's comeback were published in the local media.

All this spurred public interest. At the same time, old albums were being reissued on vinyl, tempting fans who grew up with the format.

If you wanted to listen to Pink Floyd, Bruce Springsteen or The Rolling Stones, you could get a fresh copy reissued on vinyl in 2011.

TwoBros Lifestyle and Gadget said its outlet in the Velocity mall in Thomson Road sells about 30 turntables a month. A salesman there said that customers are drawn to its basic turntable models as they can play their existing collections again at an affordable cost.

One example cited was the Lenco L-83, which comes with a built-in phono preamplifier.

A phono preamplifier is necessary to connect the record player to the speaker and can cost about $200 - almost as much as a turntable.

It is not just older folk who are rediscovering vinyl.

Mr Eugene Ng, marketing director of Orange Communications, the local distributor for Lenco turntables, said: "When we started, we were sceptical. To our surprise, the response was overwhelming. Our first shipment of 200 pieces was sold out almost instantly. Now, we sell about 60 to 70 vinyl players every month."

Even HMV is selling records, with more than 300 titles in an expanding selection. Its general manager, Ms Michele Tan, said: "Sales have been very encouraging, with HMV experiencing a double-digit growth since early last year when we started stocking records.

"Considering that vinyl is not a new format, its resurgence in the market is an indication that the physical format is still in demand."

She added that HMV's headquarters in Hong Kong was planning to produce its own records in collaboration with music artists.

So what is it about vinyl that no other format has? Opinions are divided. Some say its sound quality is superior. Others cherish vinyl's tangibility.

Mr Said Suleiman, 44, a technical consultant, started his collection earlier this year, but already has more than 300 records. He goes vinyl hunting every weekend.

He said: "The sound quality is better by leaps and bounds. The musical experience also feels more 'whole' compared with what you hear on CDs."

One thing to note is that today's music is recorded digitally, so an analogue format, such as vinyl, would not affect the sound quality, as the source is digital.

Vinyl fans may be influenced by factors, such as nostalgia or a player's distortions, which deliver a less "clean" and, therefore, "warmer" sound.

However, it is not just about nostalgia.

Said HMV's Ms Tan: "The whole process of putting a record on a record player is very engaging.

"The vinyl disc has to be extracted from its sleeve and tenderly placed on the turntable. Then, the playing arm is lowered onto the record. Somewhere in between, you may also wipe or blow off dust or debris from the record."

Mr Loo weighed in: "I think that it's the investment. When people play a CD, they think, 'I'll just insert this in my PC and play it through my computer's speakers', which leads to poor audio quality.

"Someone who is serious about trying out vinyl has probably also bought a dedicated sound system to go with it, so the biggest difference comes from the hardware, not the software."

FANS' TAKE ON THE VINYL EXPERIENCE

Fans say that one is much more involved with the playing of the music than when one simply presses the Play button on a smartphone or Apple iPod.

Mr Loo believes that the tangibility of a vinyl collection - looking at a shelf filled with records and inspecting each album's cover art - creates a feeling quite different from that of a digital-song library.

"That sense of wonder is lost when you scroll through a list of song titles on a screen. Another appeal of vinyl collecting is the hunt for records - many vinyl listeners enjoy hunting for rare records, sifting through bins of records and looking for that rare piece," he said.

Vinyl collectors, said Mr Loo, enjoy the more social experience of record hunting. "It feels more personal. People can take along a record to a friend's house, share the music experience and spend time enjoying the music. It's very different from sending over an MP3 file to a friend."

In the face of an all-digital future, vinyl has somehow carved its own niche, with a passionate and growing fan base that places less importance on convenience and easy availability of digital music. Instead, it values vinyl's perceived superior music quality and a richer, more engaging listening experience.

Where to get them

There are record shops to whet your every vinyl craving, ranging from genres such as classic rock to jazz to Mandarin songs.

This list can help you with starting your own vinyl collection.

Born of the owner's personal collection, the shop opened in 2011 and now has an extensive selection of vintage records, especially music from the 1980s and earlier. Step carefully around the records stacked on the floor.

Tucked away in a corner of the building's basement, the shop is crowded on weekends. It specialises in 1970s-era music, classic rock and classic pop.

Started in 2011 as a hobby, the store focuses on jazz, classical and indie rock. It has a cosy living-room atmosphere, letting users browse in comfort. It also sells record players.

One of the oldest shops in the vinyl business, it opened in 1994.

It stocks records from many Chinese artists, as well as a wide selection of CDs.