Paradise Killer (PC): A deceptively complex whodunit that knows how to play with a closed hand

Don't be fooled by its relatively simple exterior. Much like its amusingly colourful cast of characters and (supposedly) idyllic setting - Paradise Killer is a lot darker and more intelligent than it lets on.

In fact, I'd even go so far as to say that it's one of, if not the most intense whodunit-style mystery games that I've ever played, period.

Yes, I know I'm late to this particular party - the game originally released in September last year, but better late than never, right? And to be honest, I'm actually annoyed that such a gem has flown underneath my radar for so long.

Let's start off with a little context - and don't worry, it's pretty much spoiler-free. In this game, you step into the shoes of a disgraced, and apparently immortal Syndicate investigator named Lady Love Dies (it's complicated).

Sure enough, the naming conventions in PK are certainly quite unorthodox, but let's just say that between a reality-warping taxi, having conversations with a vending machine AI and a society whose ultimate goal is to resurrect a bunch of creepy alien gods, the weird nomenclature is probably going to be the least unusual thing about your journey.

Heck, you could even treat them as code names to add some extra "spy" flavour into the equation.

Anyway, the crime is a pretty straightforward one on paper - the Syndicate's top brass, collectively referred to as the Council have been murdered while they were in the midst of performing an important ceremony.

Accordingly, Lady Love Dies, who is accompanied by her electronic sidekick-cum-laptop Starlight and a cheeky blue demon named Shinji must investigate the various suspects and identify the culprit.

Despite what I've already said about not taking this game at face value, I certainly wouldn't blame you for doing so. After all, waltzing through the streets of Paradise, which I might add is really, no, amazingly designed is a rather pleasant and tranquil experience, and it's easy to get lost in the resort island-esque atmosphere at times.

So, whether you're jumping across rooftops in search of Blood Crystals (basically in-game money), or simply casing out the crime scene, the world of Paradise Killer is actually surprisingly gorgeous to behold, and I'll even say that you might even come across a couple of clues by accident while you're out exploring.

Speaking of which, let's expand a little more on the historical context, because the developers have molded it in such a way that you can't help but feel its influence wherever you go, and your own interpretation of the game's underlying concepts is probably just as open-ended as the crime itself.

To put it briefly, the entire worldview of Paradise Killer and its society can come across as cult-like or even heretical to some folks, given that the Syndicate's ultimate objective is to create a perfect society and resurrect its various so-called gods.

All of them usually feature demonic or Lovecraftian inspirations, and although I did find these a little creepy and disturbing at first, there's also something to be said about how tightly the developers have been able to weave this inspirations into the game, while still making it feel natural and coherent.

Additionally, the soundtrack helps too, and although I don't have a particular favourite, what I will say is that all the tracks feature a common denominator, which is their "city pop" theme.

Coupled with the whole resort island aesthetic that Paradise Killer already has going on as well as the colourful character outfits and interfaces, this combination is nothing less than spectacular, and it's absolutely perfect for getting into the groove of solving a heinous, brutal murder mystery.

Reading between the lines

Since we're on the topic of murder mysteries, the gameplay formula in Paradise Killer is generally a simple one, although like many of the game's other aspects, it's not as straightforward as it seems. Fundamentally, it is split into three portions.

The first of it involves dialogue and puzzle-solving, namely speaking to suspects, gathering alibis, cracking puzzles - basically anything that goes on the standard whodunit to-do list.

Needless to say, the "how" is just as important as the "what" - in some situations, the suspects won't provide you with key pieces of information until you've achieved a certain level of rapport with them, and while I do admit that this is quite a "duh" moment, it's also one of those things that I wish I knew right from the start, and that's why I'm saying it now.

Nevertheless, I am quite appreciative of the fact that the developers didn't make it a game-defining factor - even if you simply close your eyes and hit every dialogue option you've got, you should still be able to make a convincing case by presenting the right evidence at the end.

As for the second half, here's where Paradise Killer starts to veer off from the usual mystery game formula, because there's also a lot of "platforming" you need to do. Apart from the game's slew of collectibles, like Blood Crystals, audio tracks, whiskey bottles and coloured crests - some key interactions and pieces of evidence will require some exploration to find.

On that note, you won't have to worry about fall damage here, so go ahead and jump off a cliff if there's something worth investigating below. Speaking of which, I'll do you a favour here - if you come across a footbath near the Syndicate HQ building that costs 5 Blood Crystals, or the various vending machines scattered around the island, just go ahead and fork out the cash - trust me, you'll thank me later.

The final portion of Paradise Killer's gameplay takes place within the courtroom, and it's quite similar to what you might get from Capcom's Ace Attorney series, minus the trademark "Objection!" bit, of course. After gathering whatever evidence you need, you'll build your case against the culprit from the ground up, breaking or corroborating alibis under the watchful eye of the enigmatic being named Judge.

It's here that I'd like to introduce what is arguably the most important thing that any detective or mystery game should aim to address. In fact, not only is it one that many folks might have forgotten along the way, but I also think it's the one singular factor that Paradise Killer has been able to capture to a T. 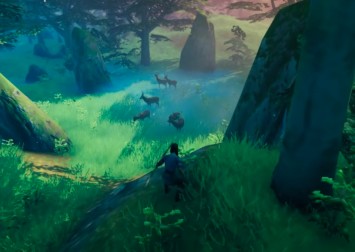 In short, when it comes to making a solid case against any suspect, the single most important party that you as the detective needs to convince isn't the Judge, the victim or the even the culprit - it's yourself.

You see, Paradise Killer has no "correct" ending per se, and by that same token, no ending is fundamentally "wrong" either, save the ones where you present a weak case, of course. Accordingly, what Paradise Killer is really banking on is that Lady Love Dies, or rather the player has to make a case that they themselves would be completely convinced by.

Yes, I might sound unnecessarily philosophical now, but once the realisation hits you that the only real case you've needed to make the entire time is to yourself as the investigator, that's when the true beauty of this game really makes itself known, and trust me, you'll love it all the more because of that.

However, like the crime itself, Paradise Killer isn't 100 per cent perfect. But to its credit, it's one or two minor flaws are mostly gameplay-related - the concept themselves are great as they are. Anyway, although I have said earlier that wandering through Paradise is quite a spectacular experience,

I do still think the developers could have put in a little more work when it comes to navigation and user interfaces. Specifically, the map doesn't tell you much about anything, which can be quite annoying when you have no idea which district a particular character or landmark (that you want to investigate) is located.

As such, I wouldn't be surprised if players end up wasting unnecessary time or Blood Crystals trying to "feel their way around", in that sense.

I mean, I get it. Part of the game involves investigating the nooks and crannies, which may or may not be located near Fast Travel stations, but it can be absolutely frustrating when a lead literally takes you to opposite ends of the island, and if you don't happen to have a Fast Travel station unlocked within the district, you're simply going to have to hoof it, not to mention that you don't even know if you're headed in the correct direction or not. Would it kill them to simply add a directional arrow?

Additionally, although the game places quite a great deal of emphasis on platforming, the level geometry and movement aren't exactly very precise.

For example, the game isn't clear on which obstacles you can jump over and which you can't - a lot of my time was spent trying to jump over a block that I already knew I could go over, but somehow it only worked when I held down the sprint and jump keys all the way through, and that's not even the worst of it.

Granted, you could say that this is more of a pet peeve than anything, but the underlying point is there: the game can feel a lot more long-winded than it needs to be in some aspects, and I feel players could potentially be spared some of these troubles without infringing on key aspects of the investigation process.

Time to get this trial underway

Still, despite those few "inadequacies", Paradise Killer is a fantastic game, and I did enjoy the majority of what it had to offer in terms of setting and gameplay. Impressively, it is also one of the rare few that really knows how to play with a closed hand, and doesn't immediately collapse the moment players find the first few cracks in the equation. Not to mention that it manages to do all of that in style, too.

In fact, I'll even toss out a nod to your blue demon buddy Shinji here - his snarkiness is quite infectious, and the amusing small talk he makes with Lady Love Dies when she encounters him wandering about the overworld adds a touch of "life" into an otherwise quiet island.

And it's not just him - Paradise Killer allocates all of its characters their own fair share of the spotlight, and of course, that includes Lady Love Dies herself.

Each of them paints a uniquely different picture of their experiences that not only makes their potential motivations clearer, but these ideas also help to enhance the player's own perception of the world at the same time, and if that isn't masterful world building, I don't know what is.

As such, when you put everything together - aesthetics, audio and all, it culminates in a mystery game that is not only surprisingly well presented, complex and expansive, but also makes sure to address the subtler concepts that make the genre as gripping and dynamic as it is.