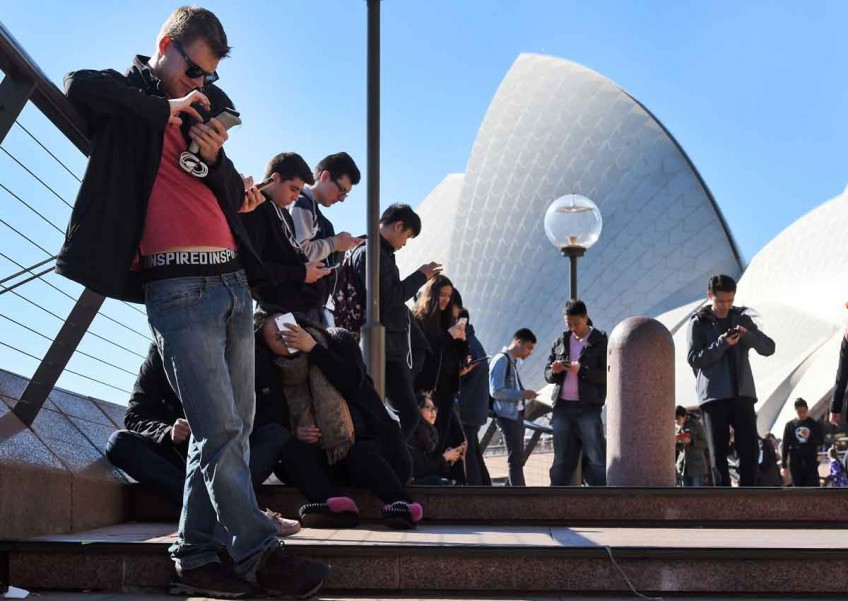 Dozens of people gather to play Pokemon Go in front of the Sydney Opera House on July 15, 2016.
AFP

SYDNEY - A couple playing Pokemon Go were threatened at gunpoint in a town park south of Sydney, Australian police said Friday, as they blamed the game for a wave of crimes, traffic violations and complaints.

Two masked men carrying a rifle held up the couple who had gone to the park in the small town Wednesday night to search for virtual "pocket monsters".

The would-be robbers fled empty handed and New South Wales state police said there was "nothing to suggest" that they had lured the 29-year-olds to the park using the app's geolocation feature.

The wildly popular mobile app, which is based on a 1990s Nintendo game, has created a global frenzy as players roam the real world looking for cartoon monsters and was launched in Australia last week.

Separately two 17-year-olds were fined for playing the game while behind the wheel in a Sydney suburb, two days after police in Western Australia state said a patrol vehicle had to swerve to avoiding hitting a girl who was looking down at her phone while playing the game.

"We turned round and spoke to her and she said she was addicted to the game," acting Sergeant Daniel Fitzgerald told Perth local newspaper group Community News.

"Pokemon is dangerous," the police force tweeted after the incident.

Similar frustrations were expressed by police in Tasmania state, who said there was an increase in the "number of calls about suspicious vehicles and behaviour and people driving while using mobile phones, with the explanation that drivers are 'looking for Pokemon'".

"Police are urging people to be aware that even if it's a rare Pokemon, driving dangerously is just not worth it," Tasmania Police added.

Local residents in the western Sydney suburb of Rhodes have also called police, complaining of "complete chaos" and "massive levels of noise" after midnight at a park where Pokemon players were congregating, the Sydney Morning Herald reported.

A young New Zealander reportedly quit his job in a cafe to chase virtual Pokemon characters around the country.

Tom Currie, 24, told MediaWorks' Newshub he had booked numerous bus trips so he could catch "some awesome Pokemon on the way".