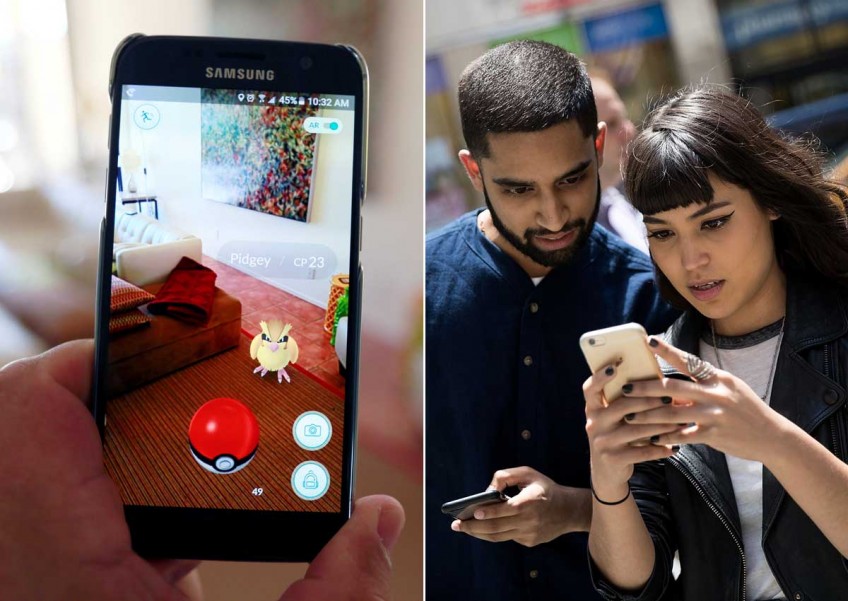 SINGAPORE - It is probably not an understatement to say that much of the world has been caught in the latest wave of Pokemania.

Ever since augmented-reality game Pokemon Go launched late last week, there have been many media reports about the mobile app - about players sustaining minor injuries because they weren't paying attention to their surroundings, Nintendo's stocks surging, and the discovery of a dead body by a player.

There was also a bizarre incident where a 21-year-old Pokemon Go addict refused treatment after he was stabbed in order to continue playing the game.

The popularity of the smartphone app has even led robbers to use it - in a rather innovative way - to lure victims to secluded spots.

Most reports are coming from the United States, Australia and New Zealand - the only three countries where the game was launched in. The developer halted the roll-out of the game to other countries after their servers were overwhelmed.

That's right, the game is not launched in Singapore yet.

That "travesty of justice" is apparently what set off Australian expatriate Sonny Truyen's tirade against Singapore and Singaporeans. He reportedly called Singapore a "piece of f***ing s*** country" in frustration, and said Singaporeans are "stupid" and "can't even read".

Mr Truyen has been fired from his job, just one week into it, and is likely on his way out of the country or keeping a low profile.

After apologising, he said that it was "disappointing the lengths Singaporeans went to to attack me and deny (me) any chance of making amends for my actions". We are not sure how he wants to make amends, but we think he is not banned from helping in charitable or social causes in Singapore.

Even though the game is not officially available here, players who can't wait can get around the issue by "tricking" their phones or the system into believing that they are in New Zealand, Australia or the US. It's apparently easier to do that with an iPhone than an Android phone, according to an article on Hardware Zone.

Players can also hack their phones if they so choose, but there are currently malware masquerading as the Pokemon app.

The game is rumoured to be launching here in "the next few days", Hardware Zone said in a separate report.

One blog called Pokemon Go Asia, which claimed to be the "Doorway to all Pokemon updates in Asia", posted on Wednesday (July 13) afternoon that the game will be rolled out in Asia within the next 48 hours.

Look where you're going

If you're this far into this article and still asking "what is Pokemon (GO)?", don't worry, you aren't alone. True to Internet form, news reports have sprung up with answers. Try here or here, and learn how to play here.

The short answer to that question is that it's an augmented-reality smartphone game that "puts" Pokemon (short for Pocket Monsters) into the real world using your phone's camera. You "catch" these monsters, train them, and then get them to fight other people's monsters.

The game touts its ability to "move people", making them explore their neighbourhoods in order to get more Pokemon (apparently the plural of "Pokemon" is still "Pokemon"). There have been reports of a few impromptu meet-ups in Australia and the US by players over the weekend.

But it also has its share of real-world problems, like the aforementioned minor injuries from carelessness (inevitable if players insist on staring at smartphone screens while walking, or even driving!), and players going to places where they aren't suppose to.

Cheating partners should also take note: The geolocation feature in the game can give you away, as this man in New York found out the hard way.

Less than a week after its launch, the app has already surpassed other popular apps - like Tinder on Android - in download numbers and active users. There's even speculation that its number of daily active users will surpass that of Twitter's.

Some businesses (and a church) are getting in on the action too.