A social media post from a police station in the Philippines advising women not to wear skimpy clothing if they don’t want to be harassed has sparked a new fightback against the country’s so-called rape culture.

A controversial Facebook post has sparked a Filipino version of the MeToo movement, igniting a deeply felt discussion on the nation's so-called rape culture and inspiring more than 50,000 tweets.

"And for you girls, don't wear skimpy clothes because if you are harassed, you would be seeking our assistance," the Facebook message from a local police station in Quezon province, south of Manila, said. "Think about it!"

The inflammatory post, published just before the Philippines celebrated Independence Day in June, soon became the target of a backlash. It was quickly taken down, but the hashtag #HijaAko ("I am a young lady") continues to resonate with Filipino women.

Frankie Pangilinan, the 19-year-old daughter of Philippine actress Sharon Cuneta Pangilinan and Senator Francis Pangilinan, responded to the police post with a tweet in angry capital letters: "Stop teaching girls how to dress?? Teach people not to rape."

Former television personality Kat Alano, 35, also felt compelled to weigh in and point out that rape and sexual assault are not driven by so-called skimpy clothes.

"When I was raped by #rhymeswithwrong still famous celebrity who had smear campaigns to destroy my career and raped many more, I was wearing a T-shirt and jeans," she tweeted about her experience with an unnamed Filipino celebrity.

"He drugged me too, so trying to take my jeans off was difficult for him. Hard to rape an unconscious person in jeans."

Alano says she was 19 when she was raped by the celebrity, and she has since said coming forward with the allegation ruined her career. 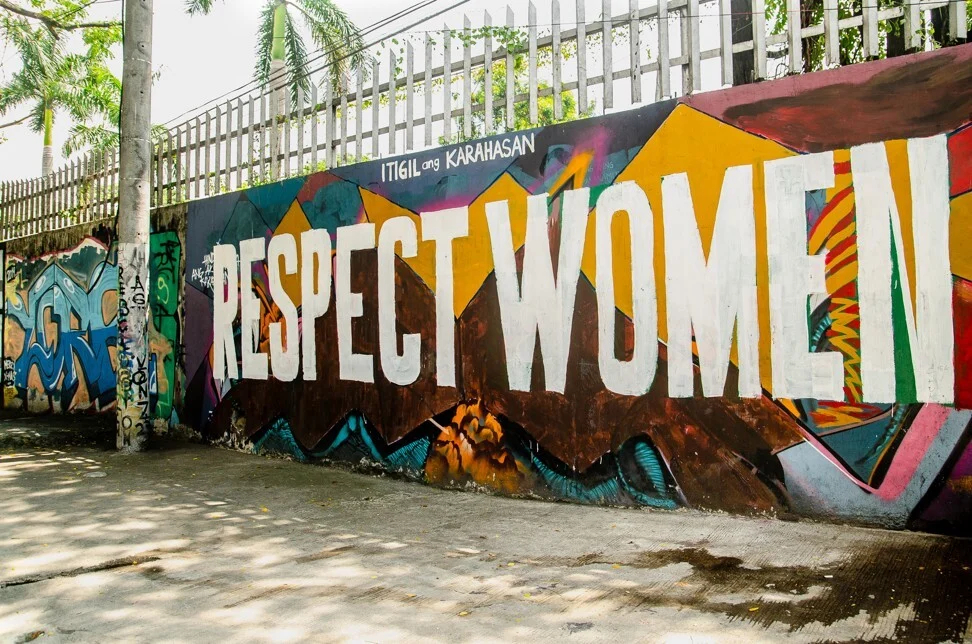 A mural in Metro Manila reminds men to respect women and end violence against them. PHOTO: South China Morning Post

The HijaAko movement is a welcome newcomer to the fight for women's rights in the country, says Arceli Bile, a women's rights activist from the National Council of Churches of the Philippines, especially now that more young people are engaged in the discussion.

Filipino culture, she adds, has made it difficult for rape and sexual assault victims to speak out.

"When women do speak up, there's always this shadow of doubt cast over their testimony, because that's not what we were taught to do," she says. "In some cases, the victims even end up blaming themselves."

A 2017 National Demographic and Health Survey even found that around 1 in 10 married Filipino women think their husbands are justified in beating them if they refuse sex, among other reasons including neglecting their children and burning food.

A failure of leadership can help perpetuate rape culture, says lawyer Twyla Rubin, from the Commission on Human Rights of the Philippines.

"The state is obligated to ensure that violence against women will not occur, but how is this possible if the state itself - through its leaders - is perpetrating it?" she says, citing President Rodrigo Duterte's jokey references to rape and sexual assault.

In 2018, talking about the city for which he was mayor before he became president, Duterte said: "They said there are many rape cases in Davao. As long as there are many beautiful women, there will be more rape cases."

The following year, at a military graduation ceremony in Baguio City, Duterte pardoned cadets for past offences. He joked that they included rape.

"The number one is for rape… Number two is drugs with rape with robbery … Third, multiple rape of the women of Baguio, the beautiful ones," he said at the time.

Rubin believes this sort of remark leaves a lasting impression. "When our public servants make fun of, or trivialise, rape, it affects the public's perception, making people think they can also get away with it," she says.

She adds that Filipinos must keep asking for accountability from the government, particularly in implementing its laws for women, such as the Anti-Rape Law of 1997.

Filipino women haven't always lived under a shadow of rape and sexual assault. Bai Bibyaon, a respected elder from the Lumad - the collective term for the indigenous non-Muslim peoples of Mindanao - recalls growing up in the southern Philippine region and never hearing of rape cases in her community.

"For us Lumad, the word rape did not exist," she says. "It was only introduced by the entry of the military and the Japanese into our communities." 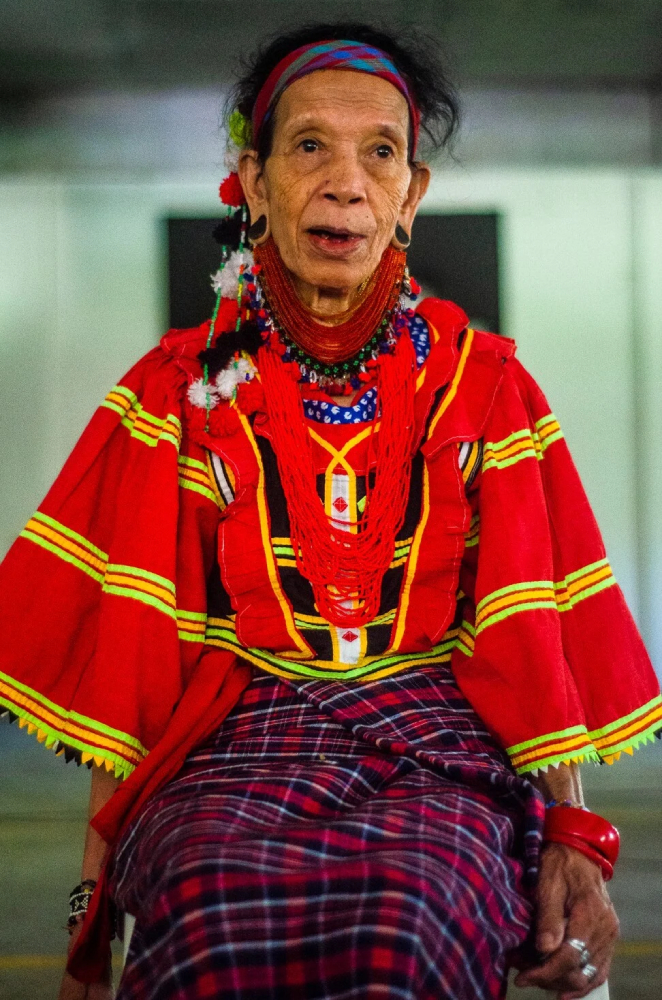 In the Cordilleras mountain range, in the northern Philippines, there is another small society in which rape was once not an issue. Sexual assault was an alien idea in this mountain community, the Bontok people. There was not even a word for rape, and no punishment set down for the unknown crime.

The two-hour film from 2014 seeks to understand the morality, relationships and sex lives of the Bontok people of earlier decades, and why rape didn't exist in their communities.

Valle says he first heard of the Bontok people and their rape-free existence at one of June Prill-Brett's lectures in 2004, when the renowned anthropologist, who is herself a Bontok, shed light on her research into the society.

Filipino society, Valle has come to understand, has absorbed many of the beliefs of the nation's Spanish, American and Japanese colonisers regarding women's place in society. "This kind of mindset is reflected in a lot of issues where women are on the receiving end of abuse," he says.

Although the Philippines' rape culture is at least partly a product of colonisation by societies that deemed women the inferior gender, anthropologist Andrea Ragragio cautions against laying the blame for rape in Filipino society today solely on outsiders. 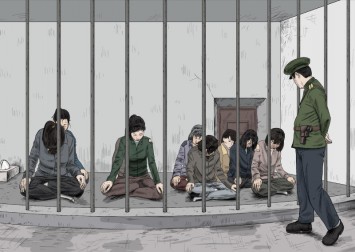 She says colonisation is based on ideas of moral and material superiority over other people - including a belief in male superiority - yet to say it is the sole cause of rape culture would be wrong.

"Rape culture is created and recreated under any oppressive system," she says.

She points out that it is better to focus on early Filipino societies in which individuals of both genders had greater autonomy. The documentary Walang Rape sa Bontok, she goes on, provides an insight into that sort of Filipino society.

Valle and Ocampo also explore the broader issue of gender relations in the Philippines in the documentary. Both Ocampo and the production assistant working on the film, Andy Magas, appear on screen and both reveal they were sexually abused when they were young.

Ocampo says she has found that most Filipino women have some experience of sexual abuse. "Whenever I get to talk to a group of women, and the conversation deepens, two or three of us would turn out to be victims of either sexual abuse or rape at one point in our lives," she says in the film.

Ocampo says making the documentary has helped her recover from the trauma.

"Doing Walang Rape sa Bontok was my real gateway to healing. I did not become a rape survivor right then and there. I was still referring to myself as a 'rape victim' in the film. It helped a lot that I did it with my life partner, Lester, who is such a gracious feminist ally."

Ocampo says the battle for gender equality and freedom from sexual abuse is always worth the effort.

"I am nowhere near tired; fighting against gender-based abuse has become a focal point in my life right now," she says.

"And I am glad that more and more people - of all genders - are speaking out loud against victim-blaming and rape culture. But we must realise it takes more than this to defeat it. More than culture change, there must be systemic change. If we don't achieve it in this lifetime, I have faith that somewhere in the future, it will happen."