Despite the closure of Ramadan bazaars due to circuit breaker measures, Malay cuisine stall owner Zuliza Zulkifli has been busy.

Her business profits this year have exceeded last year's haul for the same period and orders for today are closed since she is fully booked.

The 42-year-old, who runs Nasi Ambeng Asli Jurong West, has turned to online platforms to market her wares during the Ramadan period. Much like other merchants, she relies on sales during the festivities for a seasonal windfall.

Her business has reaped rewards from the move, especially since she no longer has to fork out $10,000 to $12,000 to set up a physical stall at Ramadan bazaars, something she had routinely done in past years.

"My customers used to live mostly in the west, but now they come from areas such as Tampines and Punggol," she said.

Noting that this does not mean physical stores are obsolete and that her increased sales could be the result of exceptional circumstances this year, she added: "Many people could be worried about leaving the house and so are ordering food to be delivered. I'll probably still have a stall next year but could make my online presence bigger."

The launch of several virtual Ramadan bazaars has thrown a much-needed lifeline to many home-based retailers who rely on Ramadan sales.

Among these are platforms like B. Halal and Gobaza.sg, and BazaarRia, a platform jointly launched by DBS Bank and its client Mi Planets on Monday, and which is already being used by more than 800 merchants.

Madam Normah Abas, owner of floral decor business ZN Exclusive Creation, said sales dropped to zero for a spell of time during the circuit breaker period. She then signed up on BazaarRia - with the help of DBS - and has seen "a steady pickup".

Now, she is even considering closing her physical shop after the outbreak is over to save on rental costs. She said: "Going online has helped us a lot by enabling us to still earn money."

Listing platforms have pulled out all the stops to give merchants a boost and recapture the conviviality of Hari Raya Aidilfitri celebrations. Gobaza.sg has, for instance, held "go live" sessions where vendors are interviewed to give them a chance to promote their products. 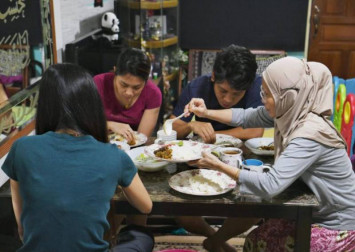 BazaarRia has sought to innovate via its payment system, integrating it with DBS' mobile-based QR payment collection method so people can pay by scanning a PayNow QR code using their smartphones.

Still, it remains to be seen if such measures are enough to help all home-based retailers break even.

Ms Hazirah Abdul Halim, owner of Haifa Areta, a home-based Hari Raya apparel business, said her sales have halved during the outbreak. This is despite her operations being primarily based online and her signing up on multiple platforms.

"My main challenge was not in shifting (my operations to digital), but rather to juggle, upkeep and adapt to multiple new platforms. With a bit of a boost, merchants like myself hope to maintain our businesses and break even with the profits earned," she said.