The robots helping to keep the Winter Olympics machine running

There’s a lot more to the Winter Olympics beyond the breathtaking jumps on ski slopes and whirring spins on ice rinks. The sporting spectacle could not have been the international marvel it stands to be without the hard work and meticulous planning of volunteers and organisers behind the scenes.

For this Olympics, however, it’s not simply a celebration of humanity, it is also about marvellous machines as robot helpers oil the operational gears of the Games.

Daily life in the 'closed loop' may resemble scenes from science fiction films as these quirky droids set the Olympic village abuzz with their service.

The main cafeteria is a bustling sight to behold, with robots and humans co-running the scene.

From hamburgers to fried rice and even ice-cream — an extensive cross-cultural menu comes to life under the diligent 'hands' of robot arms toiling away behind glass panels in different corners of the cafeteria.

The bar is also robot territory with a single robot arm shaking up cocktails for athletes and staff. Two human aides can be seen in the area, but the mastermind behind the drinks is still the robot bartender. 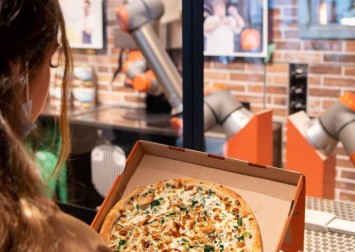 There is also a bionic barista expertly pouring coffee into serving flasks.

Surprisingly, there are no machines zooming around the canteen serving meals but instead they are using a robot of a different kind. An automated delivery system runs through the ceiling, dropping off dishes as the wire-held tray hovers slightly above seats.

Perhaps being more similar to humans than we think, Beijing’s robot servers have been caught struggling in their work.

Journalists at the main media centre have reported faults and failures in the cafeteria robots. A burger maker has been seen fenced off while a robot arm tasked with making chips was spotted 'procrastinating' — waving around without picking up or delivering any food.

This is a video of a Chinese robot procrastinating when it should be cooking my chips. It essentially sums up this Winter Olympic experience so far. pic.twitter.com/U1wmcItPih

READ ALSO: Self-driving cars may soon be among Singaporeans, but they won't be Teslas