UniSZA graduates might soon be able to attend their convocation ceremony remotely via livestreaming and receive their scrolls with the help of a robot.

Universiti Sultan Zainal Abidin (UniSZA) in Terengganu announced that it is ready to hold a virtual convocation ceremony where robots will be programmed to receive scrolls on behalf of graduates who will be tuning in via livestreaming.

The university released a simulation video on May 29 to showcase how its locally-developed robots Naseem and Seeba can be used to represent graduates to accept their scrolls from vice chancellor Professor Datuk Dr Hassan Basri Awang Mat Dahan.

In the video, the anthropomorphic robots were fitted with mobile devices likes smartphones and tablets in the head area, allowing graduates to view the convocation ceremony via livestreaming and interact with the vice chancellor through the robot.

"The (virtual convocation) that we're doing here is a simulation for our graduates.

"Should there be any problems with ceremonies involving face-to-face interaction, we are prepared and would like to showcase that the university is ready for a virtual convocation ceremony," he said, adding that graduates can attend the virtual convocation event from any location to receive their scrolls and be a part of the ceremony.

Some students have however expressed dismay over the possible use of robots to accept scrolls of their behalf.

Read Also
Will the increased use of robots continue even after Covid-19 is under control? 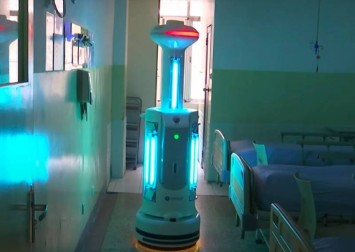 Sharvinee Narayanasamy left a comment on UniSZA's Facebook page suggesting that it was better to postpone the convocation ceremony and to allow students attend the event later as an acknowledgement of their efforts.

Siti Kausar, who identified herself as a parent, said it would be "meaningless" to use robots for a convocation ceremony meant to recognise students' hard work.

The university later explained in a statement on its Facebook page that no virtual convocation ceremony is expected to take place any time soon, nor has there been any form of planning or final decision on the matter.

UniSZA has previously showcased its Naseem robot during a convocation ceremony in 2019 where it was tasked to present scrolls to distinguished guests. 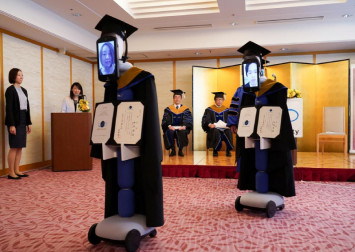 It was built in four weeks at a cost of around RM5,000 (S$1,600) with the body constructed using 3D printing. Naseem stands at 120cm tall and can respond to simple commands like "Hi Naseem".

However, virtual convocation ceremonies may soon become part of the new normal during the Covid-19 pandemic when social distancing is encouraged and large gatherings are not allowed.

Variety reported that several universities and high schools in the United States held virtual graduation ceremonies where the commencement events were livestreamed on platforms such as YouTube and Facebook.