There has been a notable lack of decent Android tablets in recent years.

Despite the many great Android smartphones that were released, it looked like portable Android tablets just weren’t receiving the same treatment.

However, it seems Samsung is still determined to put up a fight against Apple’s iPad and the Microsoft Surface with its newest Samsung Galaxy Tab S7 and S7+.

The Galaxy Tab S7, which Samsung designed to fill in the gaps between work, play, and creativity, will sport a Snapdragon 865+ which is featured on the ASUS ROG Phone 3.

Much like the Galaxy Note 20 Ultra, both tablets will come with a refresh rate of 120Hz.

As for memory and storage, the Galaxy Tab S7 and S7+ will come with up to 8GB of RAM and 256 GB of storage, along with a MicroSD slot to allow users to expand the tablet’s memory space up to 1TB.

The tablet will also come with Wireless DeX support, meaning users will be able to have their Tab S7 or S7+ double up as a desktop computer.

The tablets will come with a dual 13MP main camera plus 5MP wide-angle camera set up on the rear with an 8MP camera on the front.

The new One UI on the Galaxy Tab S7 and S7+ will introduce the enhanced Samsung DeX which helps turn the tablet into more of a PC, complete with a redesigned taskbar to improve usability and screen zoom options.

This coupled with the premium book cover keyboard works to help optimise users’ productivity and increase their comfort when using the tablet.

Shortcuts that you are familiar with on the PC will be available on the tablet.

Furthermore, with almost everyone working from home these days, video calling is becoming more prevalent and as Samsung has realised that users are more likely to put their tablet in landscape mode when video-calling, the front camera on the Tab S7 and S7+ is upgraded with a new landscape-based location in the middle of the tablet, to improve eye contact and video composition when teleconferencing. 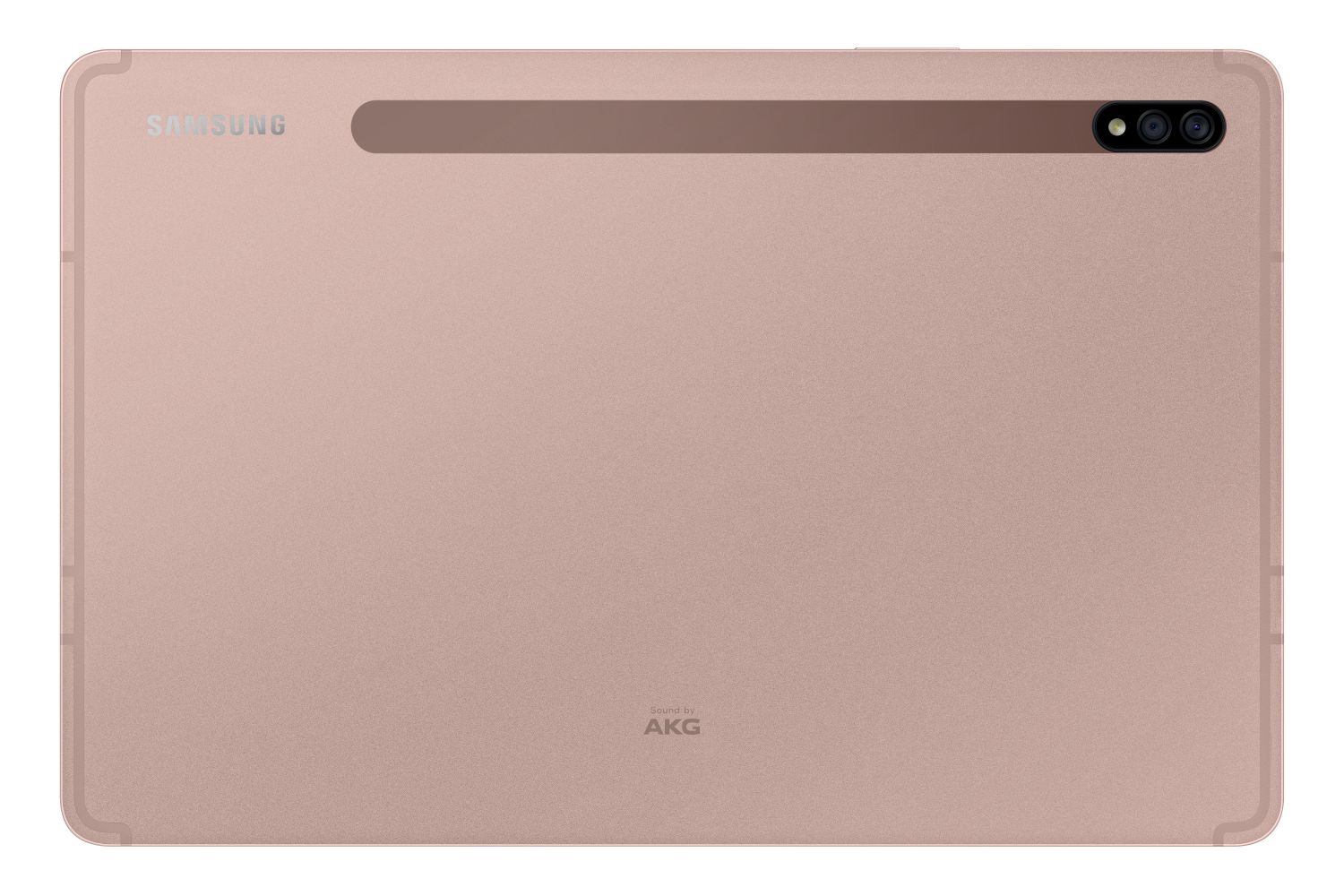 The Galaxy Tab S7 and S7+ comes with Multi-Active Windows to allow for multitasking functionalities on the tablet.

This will allow users to open up up to three different tabs in three split windows, much like on the PC. Users will also be able to group their most-used apps together and open it all up at once with ease with App Pair.

As tablets are often used by content creators and artists, Samsung has worked closely with a number of brands and developers to ensure that popular creative apps will be available on the Tab S7 and S7+.

The new tablets will come preloaded with Clip Studio Paint, available for the first time in the Galaxy store for Android tablets, Noteshelf, a digital replacement for notebooks, and Canva, a graphic design app that allows users to create social media-worthy designs.

Additionally, the improved S Pen for the Tab S7 will come with improved responsiveness of 9ms, and pointer functionality so users will have a better time using it to work on the tablet for drawing, marking of documents, and the like.

Its decreased latency is powered by deep learning technology and a faster refresh rate of up to 120Hz, this helps to make the writing and drawing on the tablet a more fluid one.

The S Pen is designed to work perfectly with the all-new Samsung Notes, giving users the ability to use both text and handwriting within the same document, which helps to make writing and editing easier and more intuitive.

The tablet will also come with Air actions that let you control your Tab S7+ from a distance. With Air actions, you will be able to perform quick actions such as Back, Home, Recent, Smart select, and Screen write.

The pen will also come with smart magnetic attachments so you can clip it to the inside of the Tab S7’s Book Cover and Book Cover Keyboard when you are on the move.

The Galaxy Tab S7 and S7+ will be available in Singapore from Aug 21, 2020 in Mystic Black first, with Mystic Bronze being available from Sept 7, 2020. Much like the Samsung Galaxy Note 20, you can pre-order the tablet via the Samsung Online Store, telecom operators, selected IT and electronics store, and Samsung’s official Lazada and Shopee store.

Customers who pre-order the Galaxy Tab S7 and S7+ will be entitled to receive a complimentary set of the Keyboard Cover (worth up to $358), upon successful payment and collection of the tablet.

Customers who pre-order their tablet through the Samsung Online Store will be able to have it delivered to them, or collect it themselves at any Samsung Experience Store from Aug 17, 2020.

Here are the retail prices for the tablets,