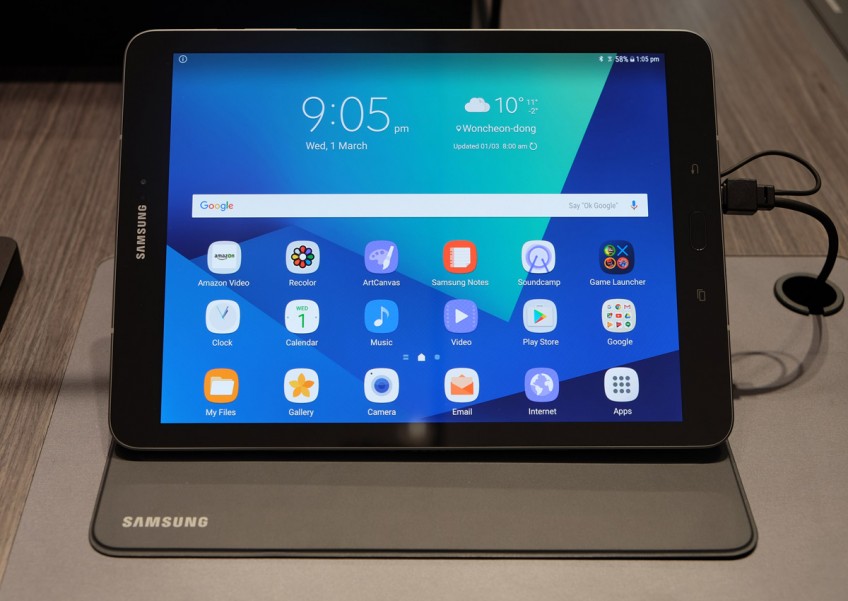 Samsung announced the launch of its new tablet - the Galaxy Tab S3 - here yesterday, just a week ahead of the expected announcement of its Galaxy S8 flagship smartphone.

The Galaxy Tab S3 is made of metal and glass with a glossy back rounded out by smooth aluminium on the sides.

Holding the Tab S3 next to its predecessor, the Tab S2, which had a plastic back, emphasises how the new build feels more polished and sturdy.

The drawback, however, is that the Tab S3 is nowhere as light as its predecessor, weighing 429g versus the Tab S2's 267g.

It is also Samsung's first tablet to feature four speakers -one on each corner.

These are tuned by Austrian audio firm AKG and pack quite a punch. Music and audio playback, when played at maximum volume, could cut through even a crowded convention hall.

Rounding up the specs are a 6,000mAh battery, which Samsung claims is good for 12hr of video-viewing, along with fast-charging capability that charges the device in 3hr.

The tablet comes with an improved S Pen stylus that lets users jot notes quickly even on a locked screen by pushing down on it and pressing the stylus' button.

There's no port on the tablet to store the stylus, though, which means users will have to find a way to ensure they don't lose it.

The Galaxy Tab S3 will ship with the latest Android 7.0 Nougat operating system and comes in two models - a Wi-Fi and a 4G-LTE version.

Prices have yet to be announced, with a release date sometime in the second quarter of this year.

Separately, Samsung announced its own artificial intelligence (AI) known as Bixby, rivalling that of its competitors like Apple's Siri and Google's Assistant.

Bixby will make its debut on the Galaxy S8, and can be activated through a dedicated button on the side of the device.

Users will be able to use voice commands to tell Bixby what to do in Bixby-enabled apps.

Samsung also said Bixby will be able to understand contextually what the user is doing on-screen and will tailor its suggested options for the user.

This article was first published on March 22, 2017.
Get a copy of The Straits Times or go to straitstimes.com for more stories.