The secret to your next best selfie is science, not surgery

The divide in the domain of taking selfies couldn't be any more pronounced. Is it an art? A science? Or a mental disorder?

Results may vary depending on who you ask, but no one should ever feel criminal for taking an innocent portrait of themselves. It cannot be denied, however, that the rise of the selfie has also given rise to cosmetic surgery, as reported by Wired last Saturday, March 31.

It was back in 2013 when cosmetic surgeon Dr. Boris Paskhover first discovered that more and more younger people - as young as 20 - have taken to getting nose jobs. The reason? The patients didn't like how their noses looked in selfies. It seems, however, that their noses weren't the real problem. 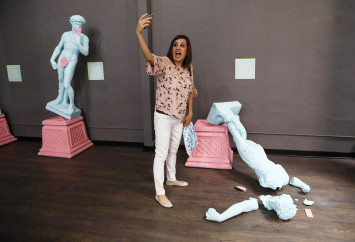 A report, headed by researcher Brittany Ward and published in the medical journal JAMA Facial Plastic Surgery last month, showed that when it comes to short-distance photographs such as selfies, the nose gets distorted and naturally appears 30 per cent larger when taken at a distance of 12 inches.

"Despite the ease with which selfies are taken, the short distance from the camera causes a distortion of the face owing to projection, most notably an increase in nasal dimensions," the study said.

Meanwhile, the study also stated that when it comes to portraits taken at a normal distance of about five feet, one's features, including the nose, do not get distorted.

So, before contemplating on irreversible cosmetic surgery the next time you're unhappy with a selfie, perhaps it wouldn't hurt to ask someone else to take your photo. Chances are, it may all just be a photographic distortion, a mere trick of the camera and not necessarily a large nose borne of genetics.

LA museum celebrates the art of the selfie