Shoot-out of the best gaming laptops 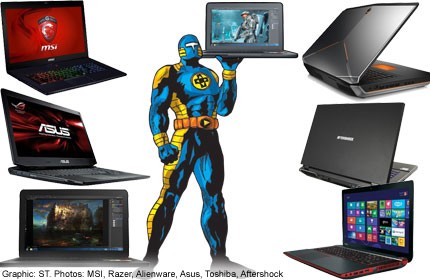 Despite the rise of touchscreen mobile games and gaming consoles, PC gaming is not going quietly into the night.

A recent Global Games Market Report by games market research firm Newzoo estimated that PC gaming will generate 39 per cent of global gaming revenues this year, higher than the 36 per cent for consoles.

The next-generation consoles from Microsoft and Sony are based on the x86PC architecture, which makes it easier to port a console game to the PC platform. Hence, you can expect more games to be released simultaneously for both consoles and PCs.

Major game titles and franchises were often exclusive, or were launched first, on consoles. Mobile gaming has been booming with the explosive growth of mobile devices. The threat of piracy on the PC platform was often used as a reason not to develop games for it.

But with the current generation of consoles reaching their use-by dates, the perception has changed.

In addition, digital game distribution platforms, such as Steam and Origin, are also assuaging fears of piracy with their built-in digital rights management. Besides, there is probably less incentive to pirate a game knowing that it will be discounted in the next Steam sale a few months later.

"PC is still the platform of choice for many specific genres of games, such as real-time strategy (StarCraft II) and massively online role-playing games (World Of Warcraft)," saidMrMarcus Wee of Aftershock PC, a local company that sells custom gaming laptops.

These are all good reasons why your next gaming machine should be a PC. And more often than not, it would be a gaming laptop because it takes up less space than the desktop equivalent.

With new Intel Haswell processors and updated graphics chips from AMD and Nvidia, the latest gaming laptops are faster than before. Mobile graphics may not be as powerful as the desktop version, but they are becoming good enough for many gamers. For instance, graphics chipmaker Nvidia claims performance gains of up to 55percent for its new GeForce 700M graphics chips.

Prices of gaming laptops have also fallen over the past two years. In 2011, 95per cent of gaming laptops with screens that were 17 inches or larger sold in Singapore cost $2,500 or more, according to market researcher GfK. The proportion declined to 36 per cent in the first half of this year. Three of the six gaming laptops in this round-up start from less than $2,500.

Consumers appear to be buying these affordable gaming laptops. In Singapore, sales of 17-inch gaming laptops in the first half of this year have increased fourfold from the same period last year, based on GfK data.

As laptops with 17-inch screens have become the standard for gaming, some of the new 17-inch models are starting to weigh less than 3kg. These machines are about as portable as 15-inch models and not much thicker. Two such gaming laptops from MSI and Razer are tested in this round-up.

Finally, there is the versatility that a laptop offers. With quad-core CPUs and dedicated graphics chips, gaming laptops are suited for heavy duty computing tasks such as video production.

So, if you are looking for an all-in-one computer that can serve double duty for both work and play, a gaming laptop looks like an excellent choice. Game on.

What to look out for in a gaming laptop

Gaming laptops are often equipped with high-end quad-core processors from Intel. The current fourth-generation Haswell CPUs from Intel are segmented into the Core i3, Core i5 and Core i7 series, with the Core i7 offering the best performance.

There have been four generations of Core i7 processors from Intel. But you can easily tell which is the latest version from the CPU model name. Take, for example, the Intel Core i7-4700MQ, a popular model found in many gaming laptops now. The first digit "4" refers to the fourth and latest generation. If this is a "3", the processor would then be a previous, third-generation CPU.

While the latest Intel Core processors perform better than previous versions, you should not rule out getting an older gaming laptop, especially if the price is good. Such a laptop will likely remain capable of running the latest games, though perhaps, in some cases, at lower graphics settings.

Those with a more limited budget can also consider gaming laptops with AMD CPUs which are more affordable. This is because the graphics chip is arguably more important than the CPU when it comes to gaming performance. Few vendors offer such AMD-powered models, though they are available locally from manufacturers such as MSI.

For AMD-branded dedicated graphics, you should consider only the Radeon HD 8700M series and higher. For Nvidia-branded dedicated graphics, it should have "GTX" in the model name, for example, GTX 780M. If it has a "GT" instead, it is of the lower mainstream range. The higher-end models of the GT series, such as the GT 650M, can also run many games in low and medium settings, but GTX is a safer choice.

For a 17-inch gaming laptop, the screen resolution should be at least 1,920 x 1,080 pixels. A smaller 14-inch model should have at least 1,600 x 900 pixels. Obviously, you may have to accept lower resolutions if you are on a tight budget, but it is worth paying for a higher resolution screen.

Besides the resolution, the viewing angles are also important. Gaming laptops often come with matte, non-reflective screens. Despite the introduction of touch in Windows 8, gaming laptops usually do not support it.

Get a solid-state drive

Solid-state drives (SSDs) can dramatically improve the responsiveness of a computer. Like a desktop PC, gaming laptops often have the luxury of having two or more storage drives. You should try to upgrade to an SSD if the option is available.

You can have an SSD loaded with the operating system and frequently used applications while your data, such as photos and videos, is stored on a secondary hard drive. If you need more speed, you can opt for an expensive configuration of two SSDs in Raid 0.

What the test results mean

PCMark 7: An indicator of general system performance, PCMark 7 consists of a number of tests ranging from common productivity to entertainment-related tasks. It also has a storage test that is useful for assessing solid-state drives.

3DMark: The Fire Strike test in 3DMark is a DirectX11 benchmark intended for high-end systems, such as these gaming laptops.

Crysis 3: This is the latest instalment of a franchise that has become synonymous with graphics benchmarking due to its graphically demanding nature. This was tested at Very High settings.

Battery life: While battery life is not really an important criterion in desktop replacement or gaming laptops, it is included because some of these laptops are increasingly portable. A video playback test is conducted, with the screen brightness set at 50 per cent, audio muted and Wi-Fi enabled.

Both of these laptops use identical CPUs and graphics chips, though the MSI laptop has more system memory. It means they have similar performance, with the Razer Blade Pro having a slight edge in the benchmarks.

While both laptops could run Bioshock Infinite decently at the highest game settings, the same cannot be said for Crysis 3. You probably have to reduce it to the Medium setting before the game is playable on these laptops.

The Razer Blade Pro also lasted longer in Digital Life's battery life test, but its battery is of a higher capacity than the MSI's. More importantly, the MSI laptop is much more affordable than the Razer.

Like the other pairings, both of these laptops have similar CPUs and graphics chips. But there is a crucial difference - the Asus laptop has a slow 5,400rpm hard drive while the Qosmio X70 comes with an SSD. While this does not affect graphics performance, it means longer loading times for games and apps on the G750JX.

The Nvidia GeForce GTX 770M on these two laptops is not good enough to play Crysis 3 at the highest settings. To get really smooth frame rates, the Medium setting is recommended.

Notably, the battery on the Asus G750JX has the highest capacity among the six laptops here. It helps the notebook last a very decent 4hr 9min in the battery life test.

The heavy hitters in this round-up, the Aftershock Titan and Alienware 18 come with the most powerful graphics configuration available from Nvidia - dual GeForce GTX 780M graphics chips. The Alienware 18 also uses an overclocked Intel processor.

However, the Titan emerged narrowly in the benchmarks as the faster machine. This is perhaps due to the SSD on the Titan while the Alienware has only a hybrid hard drive.

This class of gaming laptops is capable of running Crysis 3 at the highest possible settings, which is something that may even stump some desktop PCs.

If you are looking for the best graphics on a gaming laptop, these two models should be on the shortlist. Just do not expect to run them on battery power - they both recorded less than two hours of uptime.